Backcountry Touring in the Wasatch

Our angry snowpack had finally settled out to a point where the crew finally felt comfortable heading out into the backcountry and skiing some bigger lines.  After some very careful research of our snowpack, constantly reviewing the Utah Avalanche forecast website and just using some common sense we decided that the weekend would be a touring weekend. Fortunately for us, the Canyons Resort offers up easy access to the backcountry along the Park City Ridge Line and the north side of Big Cottonwood Canyon. We let the chairlifts do all the heavy climbing, all the way up to 9,990 feet in elevation!  Some may consider that cheating, I just call it an advantage. From there though, you are on your own and the sign posted at the top of the Canyons Resort stating, "You Can Die" is a very very true statement. So be careful and prepaired.

Our group wanted to ski the same terrain both days and we also wanted to ski something that we new had avalanched earlier in the season, so we all agreed on going up and investigating West Monitor Peak. We liked what we saw, so we decided to ski! We skied a line which had avalanched its snow earlier in January, so a deep slab avalanche wasn't our number one concern.  West Monitor is situated between the Canyons and Park City Mountain Resort.

Here is a map of our tour

Here is what we found. 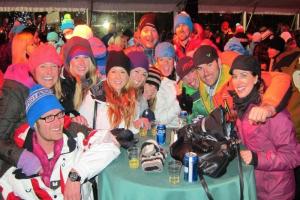 Wild Party Weekend in the Wasatch