Our friend and weather pro, Evan Thayer of Wasatch Snow Forecast, weighs in on the upcoming season.

An epic battle is shaping up – a battle that won’t take place on a sports field or in an action movie or even on your election ballot. This battle is bigger than that. Much bigger. This is a slugfest between two oceanic and atmospheric weather phenomena that will not only play a major role in determining the outcome of Utah’s upcoming winter season, but could also potentially shape the weather patterns around the globe. 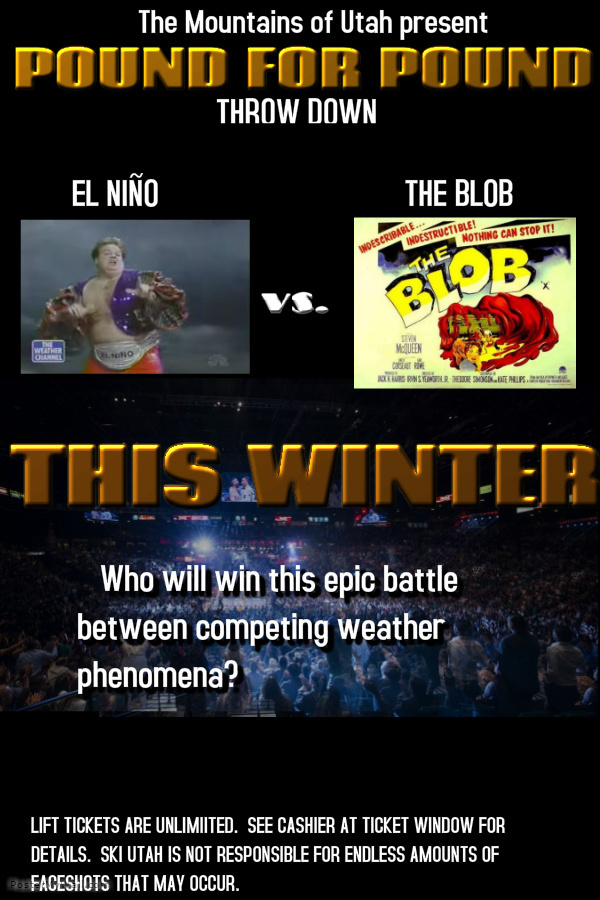 The first contender in this fight is an old friend.  One we have known about and studied for the better part of a century. It’s called El Niño. El Niño occurs when ocean temperatures in the equatorial Pacific warm above normal. This causes the subtropical jet stream to strengthen. Because of this, more abundant moisture is carried farther south than normal, often bringing well-above normal rainfall to Southern California and the Desert Southwest.  This beneficial rainfall often translates to deep snow for the high elevations of these regions, including the mountains of Southern Utah. For northern Utah, the effects of El Nino are not nearly as pronounced.

Last spring and summer, conditions looked conducive for El Niño to develop. I even wrote a blog post speculating what an El Niño might mean for Utah. Meteorologists, climatologists, and skiers were all anxiously watching to see what Mother Nature would bring us. While an official El Niño did eventually develop last winter, it was far weaker than originally anticipated and seemed to have little, if any effect on the global weather patterns.

Once again, conditions seem to be aligning for an El Niño winter. The key difference this year is that, unlike last summer when we were waiting for El Niño to arrive, this year it’s already here. In fact, as of early August 2015, El Niño is already venturing into what is considered “strong” territory – with virtually every computer model forecasting further strengthening as we head toward winter.

The challenger in this fight is a lesser known, up-and-coming phenomenon referred to as “The Blob”. Like El Niño, the Blob is a mass of warm water. However, this warm water isn’t confined to the tropical areas around the equator. This warm water inhabits the ocean off the Pacific coast of North America, most notably off shore of Oregon, Washington and British Columbia. While there has been extensive research regarding El Niño, the Blob is much newer, having first appeared and given the name “the Blob” just two years ago.

It may be new to media, but those of us who are skiers in the West are already intimately familiar with the Blob, whether we know it or not. The Blob is widely thought to be the main culprit behind the incredibly stubborn ridges of high pressure we have seen in recent years along the west coast. The “Ridiculously Resilient Ridge” (RRR) has shunted much of Utah’s frequent storms well away from us and kept us from reaching our full snowfall potential in each of the last 4 seasons. Scientists studying the Blob still are not convinced that it is solely responsible for the RRR, with some even suggesting the Blob is rather a child of the RRR. However, the correlation between the two seems too hard to ignore. While the Blob weakened some this spring – briefly giving us hope – it seems to be regaining strength and warming further as we head toward this winter. 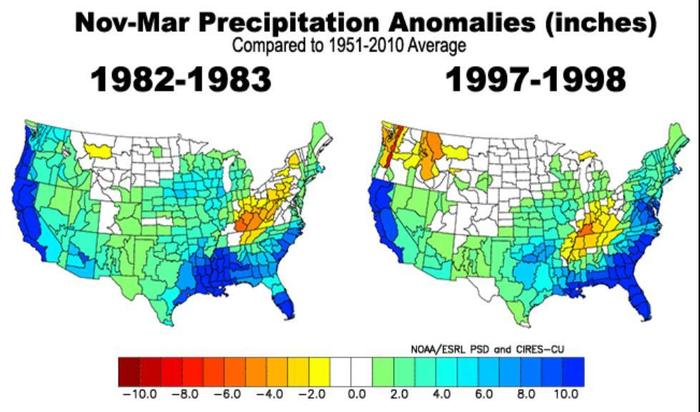 You can see that in both seasons, California got hit particularly hard, but Northern Utah also managed above average years. Currently, it looks like this El Niño could rival those winters for strength, giving skiers in Utah hope to top our already impressive seasonal averages.

The Blob, on the other hand, could be a complication. The Blob is closely tied to a climate variable meteorologists refer to as the Pacific Decadal Oscillation (PDO). The PDO is a naturally occurring fluctuation of ocean temperatures. During a warm phase of the PDO, the northeastern Pacific Ocean can see warmer-than-normal water temperatures for several years. During the ’82-83 and ’97-98 winters, the PDO was in either a cool or neutral phase, unlike right now. There were two winters in which we had moderate El Niño conditions and a warm PDO. These years were 1986-87 and 1991-92. In both of these seasons, the Wasatch Mountains received between 70 and 80% of normal snowfall – noticeably below average.

I spend quite a bit of time reading blogs, journals, and articles written by some of the best climate minds out there. Nobody seems quite sure how this El Niño will play out with regard to the Blob. Some think that the above normal precipitation will get pushed farther south into Mexico – bad news for us. Others believe that a strong El Niño will overcome any effects the Blob may have and we’ll see typically wet conditions for California and hopefully Utah.

What does seem obvious to me is that the stronger El Niño becomes, the better our chances become of seeing a good winter in Utah. The below scatterplot shows each of our winter seasons in Northern Utah, their total average precipitation, and the corresponding strength of El Niño or its cool counterpart, La Niña: 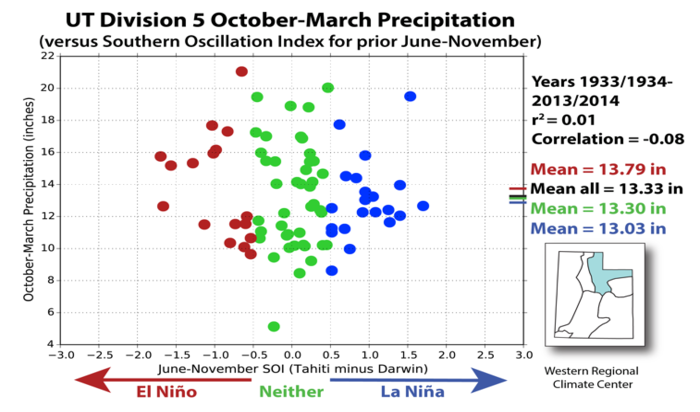 Each dot represents one winter. The farther left the dot, the stronger the El Niño. Conversely, the farther right, the stronger the La Niña. The higher on the graph the dot is the more average precipitation we received in that particular winter. If you notice the slight “V” shape the points take, it indicates that the stronger the event, whether it be El Niño or La Niña, the less likely we are to have a below average year.  This is good news, because as it currently stands, right now it looks like the upcoming season will be somewhere on the far left of the graph.  History shows us that far left years generally are at least closer to normal, if not above.

Luckily, Utah averages a truly remarkable amount of snow.  Even if the Blob manages to get in a few good punches and take the sting off El Niño, we are still liable to receive plenty of fresh snow throughout the season. Short term weather forecasting is certainly far from an exact science, and long-range seasonal forecasting like this is still light years away, which means that anything can happen this winter.  We could have a great winter, or we could have another sub-par winter. From the perspective of a diehard powder skier and weather nerd like me, it will be fascinating to watch this winter play out and see which of these forces wins the battle. Personally, I’m hoping for a strong El Niño to take down “the Blob”.  No matter what happens, I will see you on the mountain! 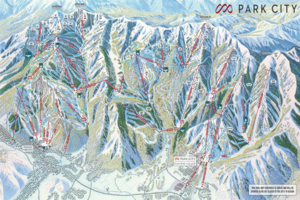 A Foot of Fresh for Closing Weekend