Southern Utah is often defined by its vast, red scenery and warm desert air. Over millions of years, Mother Nature carved out this infamous landscape that has attracted travelers from across the globe. Eliel Hindert and his crew of friends took on this unique landscape during the winter, and in the heat of the summer, just released one of the coolest ski edits we’ve seen in a long, long time. While filming part of a series for Epic TV, Hindert surfs untouched desert pow in Southern Utah. The magic of this landscape and cinematography are so striking that this ski film seems to have dropped from another planet. With world-class skiing just a few hours north in Salt Lake City, Hindert and his team broke out of their comfort zones to explore an otherworldly pocket of the earth dominated by red rock spires and hoodoos. 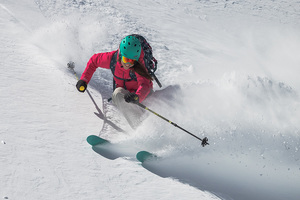