Skiing with a Dog

Time for a ride?

Work is play, play is work

Skiing with a Dog

Time for a ride?

Work is play, play is work

Wagging tails and wet noses greeted me at the door. If I didn’t know better, I would have thought it was puppy playtime, but I was standing in the first-aid office at Solitude Mountain Resort and all four dogs were in uniform. The dogs and their handlers were highly trained rescuers, and I was there to learn what goes into the training of an avalanche rescue dog.

Avalanche dogs save lives, but avoiding an avalanche is always the first rule. If you are buried in an avalanche, your life is on a timer. In which case, the best scenario is that you and your partner are equipped and trained to use basic rescue gear including a rescue beacon, shovel, and probe.

Thanks to proactive avalanche control, most people feel comfortable not carrying a beacon inside resorts. But this means rescuers would have to search an avalanche by probe, a long, daunting task. Luckily, at least eight Utah resorts have avalanche dogs on their ski patrol. A trained dog can search the same area as 150 humans using probes in equal or less time. The difference is more than numbers; it’s life or death. 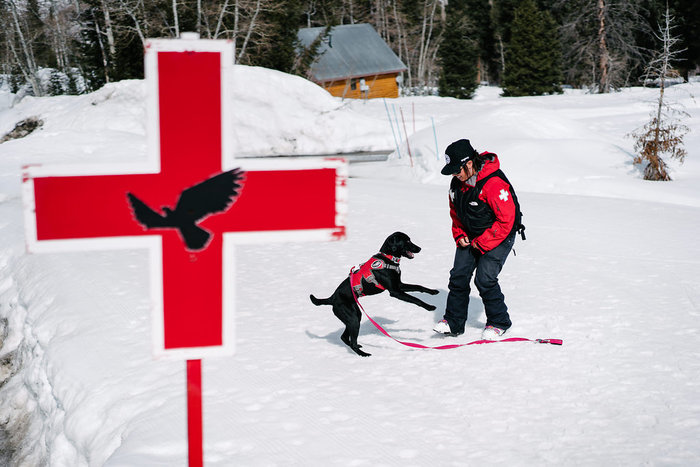 Not every dog has the right stuff to enter avalanche search training. Over coffee, I asked Keith Sternfels, Assistant Patrol Manager at Solitude Mountain Resort, and Malia Bowman, Senior Ski Patroler at Brighton Resort, how they know which puppies would thrive as avalanche dogs. They had their dogs (ZoZo and Sugar Bear) with them, plus two others (Rio and Lumen), which joined us for the interview. Wrestling and playing with each other at our feet, all the dogs were happy, well adjusted, and expertly trained. Yes, I won the interview lotto that day!

The right avalanche dog candidate has a good dose of prey, retrieve, hunt, and praise drives without being overly aggressive. In addition, teams are looking for a dog that can handle the rigors for the job, get around in snow, navigate obstacles, and handle the extreme weather.

Most often, these qualities are found among sporting breeds such as Labradors, Golden Retrievers, German Shepherds, and Border Collies or mixes of those breeds. Search and rescue would cause undue physical and psychological stress for the wrong dog.

The alpha pup in the litter isn’t the likely candidate, because rescue dogs regularly work around a lot of other dogs and people of all ages. It’s important that they get along well with others, so an outgoing, attentive, but not skittish, pup would be a better fit.

This is a lot to figure out when faced with a littler of adorable puppies. To improve chances that the right pup is accepted, potential avalanche dogs are identified young, around 49 days old, using the Volhard Puppy Aptitude Test (PAT) or some variation thereof. 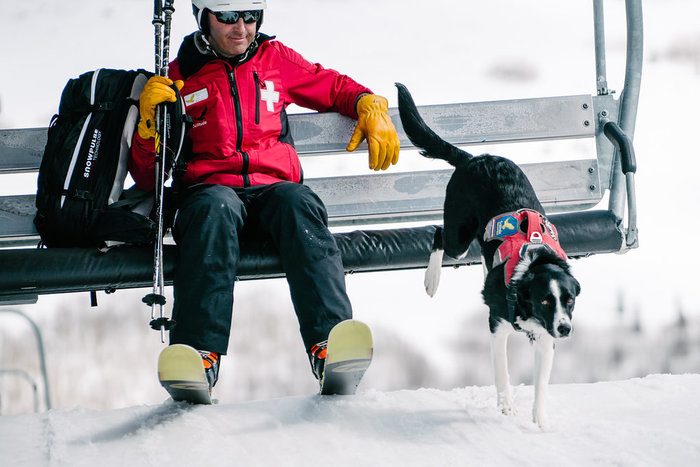 We headed up the mountain to continue the interview. As soon as Keith and Malia grabbed their gear, the dogs became animated and squirmed with excitement. “They think we’re going to train or work, which is fun for them,” they explained.

Thus far I’ve made being an avalanche dog sound like serious work, but the dogs don’t think of it that way. It is work for the handlers who devote hundreds of hours to their charges, but the dogs think it’s a game. The dog’s happiness, safety, and health are a top priority to handlers.

Training is slower paced while dogs are young to allow their bodies to develop and mature. During this time, the priority is developing a positive relationship, attentiveness, basic obedience, and exposure to varied sights, sounds, noises, and social situations. This includes ski lift and snowmobile rides, helicopters, walking on varied surfaces, and interacting with crowds and children. It sounds like a lot, but handlers make sure there is plenty of quiet time built into the day.

Positive reinforcement and small steps are critical. If at any point a dog struggles with learning a task, trainers back up to something the pup already knows. “We always end on a success,” Malia explained as Sugar Bear licked her cheek.

Hide and seek is the first “game” dogs learn. An assistant holds the pup while their handler hides in a pit or trench not too far away. Then the dog is released to find its handler and get a reward. This game progresses in difficulty, including longer distances and new people to search for in the pit or trench. It’s a fun, but significant, step toward saving lives. At this point, the dog is a Level C, or candidate, avalanche dog.

Search dogs work as a team with their handlers and often a secondary handler as well. This means training and testing challenges them as a cohesive unit. It also forms a tight bond. “I love that my companion is always with me,” shared Malia, “at home, on the job, she’s always by my side.”

At around 12 months, dogs are trained to search for victims in their own resort and test, along with their handler, to be classified as a Level B, or resort search dog team. One to two years after that, a more demanding Level A test is administered. Level A, or advanced, teams are eligible to respond to searches outside the resort, which can be more challenging for all.

Rescue teams must re-certify every two years to maintain their level of certification. On average, a dog will have an 8-10 year career. 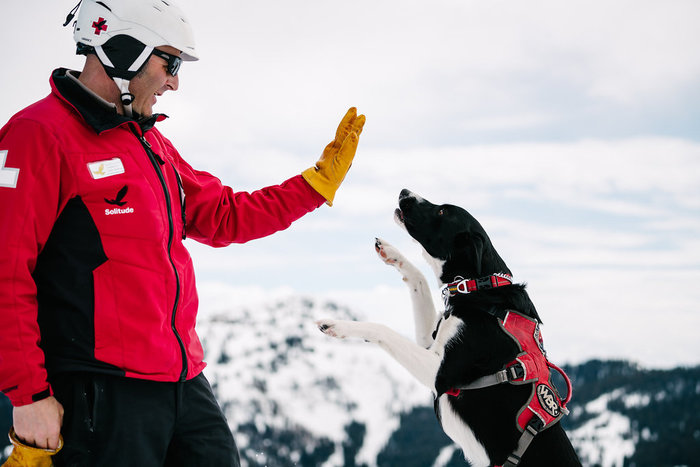 Both patrollers and their dogs loaded the lifts smoothly, but I knew it was the result of extensive training. But how do the handlers learn to work with rescue dogs? It seemed too important to leave to chance, especially tasks like riding a lift, which they are exceptionally cautious about. One bad experience could make a dog nervous for life or hurt them.

“Training for the handlers is done within the organization, with patrollers learning to be handlers at their respective resorts, usually starting off by learning how to be a good victim. This is one of the most important parts in the early stages of training. They also learn the proper way to dig holes, how to transport dogs, and do obedience.

“Once they are proficient with these skills, the patroller can become a secondary/”B" handler, the dog would have a primary handler. Then they can work their way into handling a dog of their own. The schools and trainings (offered by WBR) give an opportunity for all of the handlers and patrollers training to be handlers, to work together and keep everyone on the same page. This brings consistency and a level of standards to the organization,” explained Keith.

But I Wanna Pet the Puppy!

Yes, avalanche dogs are irresistibly cute, but that doesn’t mean it’s okay to ski right over and pet them. If you or your child would like to give these sweeties a scratch on the ear, here are guidelines:

Stay safe and I’ll see you out there!   Erika

P.S. I you’d like to learn more about Utah’s avalanche pups check out our recent post: Utah’s Cutest Resort Professionals. 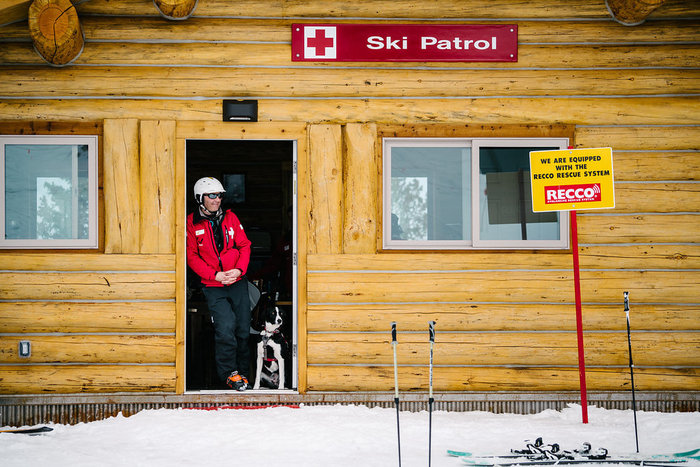 Yetis and Fat Bikes: Good Times in Ogden This Week

Florida to Powder Before Lunch 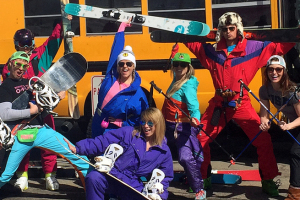 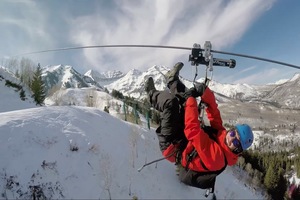