Bren becomes a snowboarder at 4 at Canyons! A special Burton board for the little guys!

I'm going to be the first to admit; I know nothing about snowboarding.  But, I think I'm about to.  Bren has asked to go "surfboarding" for awhile.  See, for him, it's a surfboard.  I'm a skier and I'll be honest, have really no desire to try boarding.  I can barely navigate straight down the hill on my skis, how would I do it falling on my rear and sliding sideways?  I'll leave it to my little guy.

So, when a few months ago I found out about The Burton Riglet Tour at  the Canyons, I had to check it out.  It was a mini snowboard park set up for kids as young as 3 to try boarding.  Keep in mind, that also means there needs to be a tiny board for them.  Burton has introduced an 80 cm board for the little guys.

I was unable to check out the tour, so we decided to head to the Canyons for a day during the week for Brennan to try boarding (the snowboard park was just that one day) and Emily to take a ski lesson as well.  When asked if Em would like to try the board, the answer was "no way".  OK, that's fine.

I've mentioned so often the ease of skiing with kids, the better.  This was a great day for us!  When you get to the Canyons, you park below the resort in a lot and take the Cabriolet up to the resort.  It is like an open air Gondola while standing.  That in itself is exciting for the kids.  Once arriving at the plaza, everything is a stones throw away.  Awesome with kids!  We check in at Ski School which just takes a few minutes as our reservation is ready to go.  We get tickets for the kids day at ski school and for Brens rental board.  Since it is late in the season in the middle of the week it is fairly quiet (note to travellers).   We head into the ski shop to get Brens board.  WOW!  Can I say so cute!  I don't know why, but those tiny board boots and board looked even cuter than tiny skis!  He loves the boots  ( a reason in itself to give boarding a try), they are squishy and comfortable.  The Canyons have just introduced the lessons and boards to the little guys in March, so this is a new venture.  I also want to mention the condition of the skis/boots/boards in the shop.  Like new!!  I am told they got all new rentals not too long ago.  Also, if your kids have a shoe size smaller than 10, you'll have to stuff socks in the boot, that's as small as they go.  Bren is a 10, so we're good!

There is a tent set up to sign kids in right next door to the rental shop.  Again, quick, organized and easy!  I head in to talk with the instructors.  We have scored!  No one has signed up for boarding except for Bren, so he has a private lesson with David all day!!  Emily is in a class with one other boy and her instructor.  It is snowing, so will be great day!

There is a new lift this year at the Canyons called the orange bubble.  I finally check this out.  Warm seats and you sit out of the elements!  Emily also checks it out and is still talking about how neat that was.  I'm heading up to watch Brennan.  He will be on the Magic Carpet and is part of the Canyon Cats progam as is Emily.  It is a 3:1 ratio with the instructor, which I love. But as I mentioned, Bren is 1:1!  He is near the Red Pine Lodge area which is at mid-mountain.  He and David take the Gondola up and head to the Magic Carpet.  There are 3 areas for the beginners.  2 carpets for the little guys and one for older people learning to ski.  Love this!  So nice to have the real little ones separated from bigger folks that could run them over.

With Red Pine Lodge right there, the kids can have a potty break and will have lunch there as well.  David lets me in on all there is to know about snowboarding and how it differs for the little guys vs older kids.  Here are some things I learned:

1. The small Burton board was designed to bend a little easier for the little ones.  Also, there was a Riglet Board Reel system designed specifically for the little ones.  If you look closely at the video, you'll see when Bren comes to a stop, David pulls a string out of the top of the board to tow him along, which is the Riglet.  It is so the little ones don't need to unhook their bindings every time they come to a stop.  David just pulls him back on the Magic Carpet and up they go.

2.  Little guys don't have the muscle strength and thought process it takes to swing their lower body all over to move the board; they move as one unit.  So, the instructors teach them small movements and balance first before they learn to go up on edges and all over the place.

3.  Boarding also uses different muscles and involves a lot more falling and getting up, so they need a few more breaks to keep them going.

As I watch, Bren is doing awesome!  He has the balance thing down and is even shuffling along.  He falls, gets back up and David says he wants to keep going.  Keep in mind, this is the first all day lesson Bren has ever had and he's on a board!

Both kids break for lunch at Red Pine Lodge and I check in on Emily.  Chris says she is doing great and they are working on straight skis and hand positions.  I follow them down for a run or 2 and Chris gives me some great advice for kids, travelling and lessons.  He's been doing this a long time and had some really good tips:

1. If your kids have never been to a daycare or away from Mom and Dad, maybe try a day or 2 before dropping them at Ski School.  It is a scary thing for some kids, especially if you are a visitor.  The kids have been on a plane, slept in a strange bed, are forced to put all these heavy, crazy clothes on and then plopped in Ski School.  If you can a week or 2 before you head on your ski vacation, have the kids spend some time away from Mom and Dad.  Put all their winter gear on, goggles, ski pants... and have them walk around the house.  Get used to all this stuff.  Then, when it's time to take lessons, they are ready and the whole thing is not so overwelming.

2.  Socks are a big deal!  I've also mentioned this.  Short socks of any kind are horrible!  Get a non-cotton sock that is high for them.  Ski shops carry all different kinds.  My favorite is the Euro brand.  Chris says if you don't have any or don't want to spend the money, a tall soccer sock works fine.

3. No poles!  Even at Em's level, still no poles.  They get in the way, they drop them from the lift and they develop poor posture.  Chris had her skiing with her hands out (note the video), to get her used to a pole position.  Kids arms get tired and sore (Moms, too) and they drop them down.  They then pull their weight back which is not the proper way to ski.  So, until they are ready to pole plant (seriously, how many people really pole plant), it's best to forget the poles.

4.  Chris cleared one puzzling thing up for me.  When Em skis, she seems to sit back a tad.  He explained it is because that is where her weight is distributed.  When kids are little, lets face it, their head is the biggest part of their body.  They are top heavy and grow into their upper body and even out.  So, she is where she is supposed to be.  Thanks Chris, that has been a mystery for me!

A quick lunch at Lookout Cabin.  Wow!!  A must do at the Canyons.  Everything on the menu is unbelievable!

I get a call from David and Bren is ready for the lift!  Wow!!!  I quickly head down the little Hidden Meadow run and there he is doing his board thing!  Again, another proud moment in our ski venture this season. I can definitely tell he's pooped out.  A little bit of boarding and plop..down he goes.  Good for little legs going all day!

We head down the Gondola and it is time to pick up the kids at the Ski School.  Big smiles, a glowing report card and we are headed home.  Here's the problem...I asked Bren if he likes boarding or skiing.... he said "BOARDING".  OK, maybe not a problem, but now I've got to get my hands on that little Burton Board!  A big thanks to the Canyons for a great day and we'll be continuing this chapter next season! 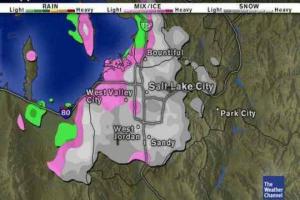 Bren turns 4 and becomes a Bambi at Deer Valley, Emily does the Park City Nastar course and talking green trails at the resorts! 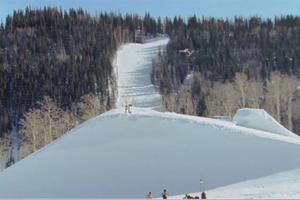