Ski season never truly ends. The resorts may cease spinning chairs each spring, but we’re not going to let the paltry few months of warm weather keep us off the snow. Utah isn’t known for vast expanses of glaciated terrain like is found in Alaska and parts of the Pacific Northwest, but with a little searching and effort, there’s plenty of choice skiing to be done in Beehive State each summer on sheltered slopes where snow can linger into the dog days.

Summer skiing requires some commitment and a bit of creativity, but as long as you’re willing to start and end in a pair of running shoes, trudge along dusty hiking trails and liberally reapply sunscreen, you can make some sweet turns in rad terrain. Remember that summer skiing in Utah is backcountry skiing, so all the caveats about being prepared and risk still apply even though it can feel like a sunny party in the mountains. Pack up a big-old water bottle, bring some rub on wax and get ready to shred. The season’s only over when you say it is. Here are 10 of our favorite Utah summer ski lines. 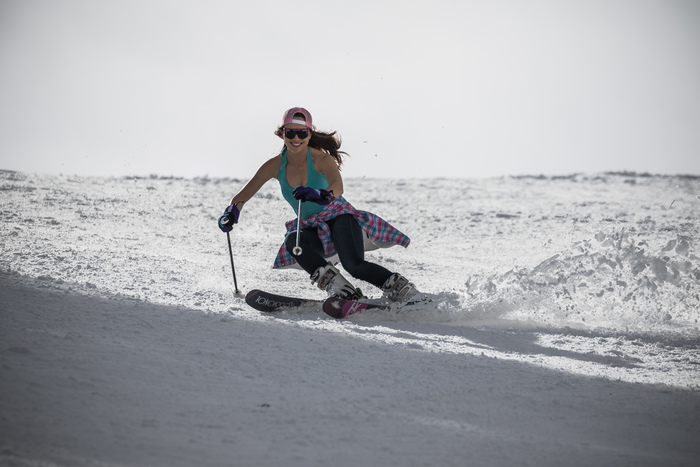 The home of The Greatest Snow on Earth in winter has some outstanding summer ski lines just minutes from Salt Lake City.

A classic that’s thankfully less terrifying than its ominous name implies, Suicide Chute is a well-sheltered, east-facing couloir on Mount Superior. Park at the upper entrance of Snowbird or at the pullout on the north side of the road. Walk up the snowfield to the east of the South Ridge Buttress and boot straight Suicide Chute—it’s the one that tops out on the first notch of the Superior’s south ridge—before shredding back down the way you came.

The Needle is an iconic line visible from the top of Snowbird's Aerial Tram. It’s a quite steep, very narrow couloir with aesthetics accurately described by its name. Start at the Hogum Fork trailhead in Little Cottonwood Canyon, and get ready for some bushwhacking and stream crossing, trending south up the fork until you reach the base of the Thunder Mountain’s east face. Once you hit the snow, boot directly up the Needle as high as the snow will take you before some steep tight turns at the top lead into a wide-open apron below.

The gem of Alta Ski Area can be skied long after the parking lots, chairlifts and bars have emptied out for the season. Start from the Wildcat parking lot, cruise up the summer road to gain the ridge and head to the top. Main Chute is steep, continuous and awesome, even in mid-summer, and there’s frequently enough snow in Ballroom below to keep ripping for a couple hundred more feet before switching back to sneakers and heading back to the vehicle for a celebratory beverage.

Pipeline is the enticingly obvious line on the American Fork Twins at Snowbird, but it’s rarely open through the season when the lifts are spinning. Start out hiking from the Gadzoom express chairlift, and gain the ridge above the top of the Little Cloud lift. Head west, and drop in directly above Pipeline’s 1,000-vertical foot chute. There’s sometimes a short rock scramble from the top, which can be bypassed via a sneaker entrance a bit earlier on the ridge.

The snowfield on Timpanogos—sometimes referred to as the Timp Glacier—starts above Emerald Lake and holds some excellent snow late in the year. Getting there requires some stout hiking from the Aspen Grove, much of it in sneakers with ski boots strapped to your pack, but the views of Utah Lake and Provo from the ridge atop the Snowfield in summer are well worth the effort. Creamy turns are icing on the cake. Drop into the Owl Bar at Sundance Mountain Resort for a cold drink afterwards. You earned it!

The two striking, north-facing couloirs on Mount Nebo—the Champagne and Northwest Couloirs—are the perfect place to ski from the highest mountain in the Wasatch when most people think it’s flip flop season. Drive as far as you can up Mona Pole Road (it’s quite rough for a regular car), park and get hiking. The obvious avalanche path crossing the road takes leads to the Pole Canyon Basin, where you can hike directly up the couloir of your choice to the Nebo’s summit. The Northwest Couloir is to the west, the Champagne Couloir is to the east.

Once UDOT crews clear snow off the Mirror Lake Highway around Memorial Day each year, it’s game on in the Uinta Mountains well into the warmer months.

Hayden looms all year, but it’s a tough nut to crack in the winter with difficult access and considerable avalanche hazard. Once things warm up, it is notably less complex. Park at the Highline Trailhead near Hayden Pass, and head northeast up the slope to the base of the Mountaineers and Reynold’s Wrap couloirs. Pick whichever one looks like it’s holding more snow and climb directly up the couloir to make some sunny turns on one of Utah's truly iconic peaks.

There are a couple options for skiing Bald Mountain in the summer. Either park at Bald Mountain Pass and ascend the south face to the summit or park at Mirror Lake and climb the east face, which likely has more snow and fewer rocks. The east face holds numerous snowfields on its talus-covered slopes, which can have over 1,000-vertical-feet of skiing touching nearly 45 degrees depending on conditions.

The twin peak to Bald Mountain rising out of Mirror Lake, the cone-shaped Reids Peak beckons to skiers and snowboarders. The north face holds a primo summer ski line where an obvious couloir between cliff bands holds snow late into the year. Start from the Mirror Lake pullout, head west around Bald Mountain and northwest into the meadow below the north face of Reids Peak. Climb the couloir and enjoy the well-earned turns on the way back down.

Murdock Mountain is directly across the highway from Bald Mountain. Despite the fact it’s not as dramatic-looking as many surrounding peaks in the High Uinta Wilderness, the flat-topped peak has some great skiing on its north face. Head southeast from the parking area atop Bald Mountain Pass to the summit and scramble down a few boulders to access the north-facing chutes. They’re short, sweet and easy to access, so you can easily ski a couple in a single day.


Have we convinced you yet that skiing in the summer is rad in Utah? Let us know which line(s) are your favorite to shred during the dog days of summer. 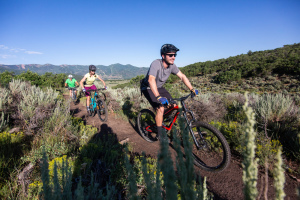 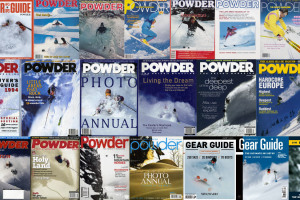 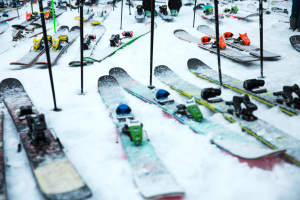 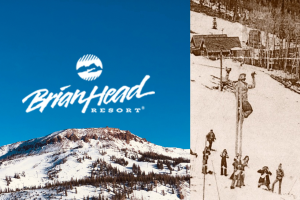 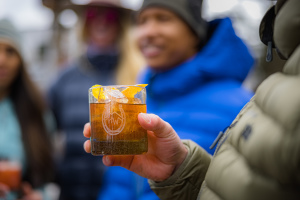 6 Park City-Inspired Cocktail Recipes to Shake Up Your Summer