Get Your Good Going

Chef Allen Tran at the Center of Excellence

Get Your Good Going

Chef Allen Tran at the Center of Excellence

Eating right is like building a campfire, says Allen Tran, the High Performance Chef and Dietician for the U.S. Ski and Snowboard Association in Park City, Utah. Athletes need kindling to fire up their bodies and then big logs to keep the fire going. He coaches the world-class athletes how to eat for performance and he keeps it simple so they can make nutritious meals while they're on the road.

Put these in a blender:

- One individual cup of Greek yogurt

- Dash of milk to thin

Blend and enjoy. It has protein, antioxidants, potassium and great flavor.

"Low-carb diets have been in high fashion for years, but if you expend a lot of energy on challenging runs and spend all day on the mountain, you need fuel. And fueling several times during the day is the best way to go," he says. It can be simple. Eat an energy bar or trail mix on the chairlift or drink a sports drink instead of water. "This is in addition to a good lunch," he says.

"There’s a reason why periodic fueling works. You’re giving your muscles fast-acting fuel they need instead of one large meal in the middle of the day that it has to process before it can be used," Tran says.

"This approach is useful for recreational skiers who often arrive at the mountain in less than peak fitness and often put in two to three consecutive long days on the slopes during a ski trip. In addition, if you fuel correctly, you’ll feel better on the first day and minimize the sore feeling for days two, three, and beyond."

Some choices for protein, fats and carbs are better than others, he says. "Ham is a better choice than bacon for a breakfast sandwich. Fruit and whole grains offer carbs that stay in the body longer than a candy bar. Olive oil and nuts provide good fats." And eat your veggies to build your immunity so you stay healthy when you're around sick people.

In addition to being the Executive Chef, Tran is also a registered dietician and wellness coach. He coaches athletes on nutrition at the USSA Center of Excellence, the Teams' training headquarters in Park City, Utah. Even during the summer as many as 75 athletes train there daily.

Food is one thing. Hydration is another.

The #1 tip for everyone on the slopes, especially at high elevation, is good hydration. There's less oxygen, the humidity is lower, breathing increases, and if you ski hard you might sweat in your jacket. Dehydration dampens performance and can cause headaches, nausea and altitude sickness.

Take a drink of water every 20 minutes or else take a drink every time you ride the chairlift, he says. Then check the color of your urine. It should be the color of light lemonade, not the color of apple juice. Drinking at lunch is not enough. Drink throughout the day at the slopes. 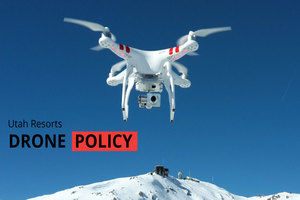 From "Sun Dancing" to Skinny Skis at Sundance