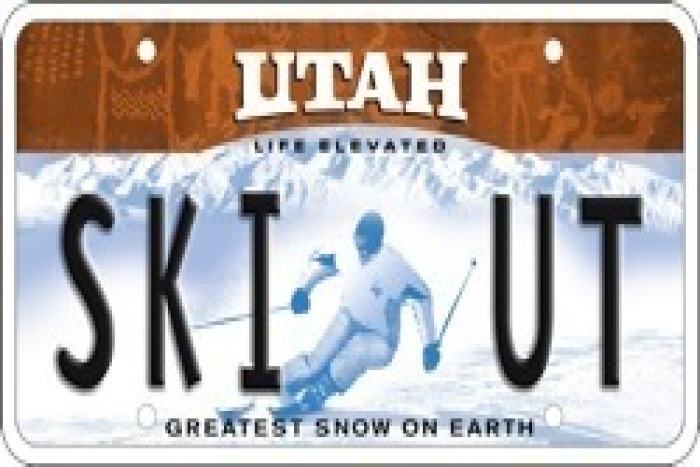 The ski plate features the majestic Wasatch Mountains with the figure of a skier in front of them. The skier is Utah resident and three-time Olympian, Heidi Voelker. Voelker's image will be both the first live human and first woman ever to be featured on a United States license plate. "I have been anticipating the launch of this plate for a long time," said Voelker, "I can't wait to stop at a red light and notice that I am the skier on the plate in front of me." Voelker also commented that she plans on buying a new vehicle in the spring and will definitelyget the new ski plate at that time.

The Utah 'Ski' license plate was first instituted in 1985 when the state had an average of 2.4 million skier days. Since then, Utah has grown to be the third most skied state in the United States and hosted over 4 million skier days in the 2006-07 winter season. Last winter was the state's fourth consecutive record breaking year for skier visits. "We are thrilled by the new plate," said Ski Utah president, Nathan Rafferty. "The plate symbolizes the importance of skiing and winter-related tourism in Utah. Not only do we have The Greatest Snow on Earth, but our local ski industry constantly strives to be the best in the world, putting Utah on the map as a key destination." Utah's incredible accessibility, breathtaking landscape and Greatest Snow on Earth are what continue to attract skiers to the area.

Stay tuned for Ski Utah to launch a season-long license plate poker contest in celebration of the new license plates.

Ski Utah is the marketing firm owned and operated by the 13 statewide ski resorts that make up the Utah Ski and Snowboard Association. The organization has been creating brand awareness of and demand for the Utah wintersports product since its inception in 1978.

For media information, contact Jessica Kunzer at 801.433.2016 or by
email at jessica@skiutah.com.

Ski Utah in a Day at Altabird

I can feel it in the air