Brian Head resort in Southern Utah is a great little gem. It is at a high elevation, over 9000' so even though it is in the south, they get plenty of snow and have great terrain. Recently a series of storms rolled through Utah and Brian Head was the big winner with over 70". I was lucky enough to go down the next weekend to blue skies and great conditions. Two things I told the kids: WATER AND SUNSCREEN! It is such a high elevation that sunburns can happen quickly and dehydration sets in quick. Make sure you keep this in mind and take frequent breaks to get a drink of water and catch your breath.

There have been several changes since I was last at Brian Head 2 years ago. They have put in a high speed quad, the Giant Steps chair. A fun fact... the #50 chair on this lift is colored gold to celebrate 50 years of Brian Head. If you're lucky enough to get on this chair, you could win a prize! Random prizes are given out each day. If you have kids, you know the thought of winning anything sets them into a competition spirit. So needless to say, they were counting chairs every time we were in line. They have also upgraded the base facilities with new restrooms and a restaurant. Also new is the Apres Ski on Friday and Saturday at 4 PM where the owner himself cooks up some BBQ and has a $5 deal at the Last Chair Saloon. You don't hear of that deal too often at any ski resort.

The view at the top is truly amazing. You can see all the way to Cedar Breaks National Monument which is beautiful red rock country in Southern Utah. I would take a minute to stand at the top of the Giant Steps lift and take some photos and take in the scenery for a minute.

Couple other amazing facts; lift tickets are super affordable. During the week days you can get an adult ticket for $35! Don't see that anymore!! Also, the terrain is so family friendly which is great for me. I am just not the greatest skier so this makes it fun that I can ski a good bit of the mountain. My tip, chair #5 if my favorite. It is a little quieter and as you're taking the blue run back to the base, look out on the right side for a little mine for the kids to explore. We raced by and didn't stop which I'm so bummed. If you do it, let me know!

This leads me to the terrain park subject. I'm going to come out and say, they scare me a bit. I recently did a blog on the new terrain based learning area. I really tried to get Brennan over there to check it out, but he's a "big boy" now and needs to be in the bigger parks. The Bypass/Detour Terrain Park was rated in the top 24 terrain parks by Snowboarder magazine.  So, we headed over to the Detour Terrain Park which is a step up and got some advice from Alexis and her friends in the terrain park:

And then Bren did his thing through this park which was great because the jumps weren't too big but yet there is that progression going down the hill of getting bigger jumps, bigger air.

For me, it's about the safety of the park and the size of the jumps. We've recently had a big fall over some huge jumps, so my advice is to stick with these smaller parks even though the little guys want to venture into the bigger parks. They get their confidence up and you parents can take a breath to see they're really mastering the small areas before the big. Once they do well in the Detour area, then they can move over to the Bypass terrain park which has much bigger jumps, a combination of boxes and rails that really challenge any level of snowboarder or skier. I obviously am not one, but I could appreciate the "skate on" system to the rails. You don't need to be a gymnast to leap onto the rails as there is the snow skate on approach to the rail. It makes it much more fun for the little ones too as they don't need to "leap" with little legs. Brian Head prides itself on the parks and hiring someone to design their parks. I could definitely see the time in placement of jumps/rails/boxes is strategic.

There are a few more weeks left in the season, but Brian Head is hosting a BIG event after the season closes called the Southwest Super Sessions April 24-26th. It is a 3 day event, $50 for one day or $100 for the weekend that will feature larger terrain features; one "super park". 1 chairlift will be spinning and all the runs will be one giant terrain park. For more information on this go to Brian Heads terrain parks Facebook page. I'm pretty sure I won't be there, but sounds like a great event for a "super park" experience. 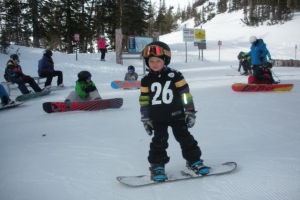 Rhythm and Blues in Utah