I've written many blogs on snowboarding and kids. I still have parents come to me and say "I don't want my son/daughter to snowboard." Why? If they want to, why not? For me, it all started 3 years ago when Brennan just "decided" he was going to become a boarder. It sent me into research mode as to what to do now. I'm a skier, not a good one, and had no idea what to do. Of course, lessons are a must. The problem is that there are still quite a few resorts that don't like kids on a snowboard until at least 7. Well, Brennan is 7 and has become a great boarder. It all comes down to letting them do what they want. If your child wants to be a chess player, dancer, baseball player...you sign them up. But for some reason, there is still a disconnect when it comes to letting kids snowboard. I sat down with Billy from the Ski/Snowboard school at Brighton to ask why he thinks that's the case.

First: Snowboarding has a tough learning curve. For adults and kids, that first lesson is spent on your bum. You normally will spend the entire day, if not several days on the beginner lift. To get that turning thing down, most start skidding on their heels down the hill. From there you try to get the turning down using your toes. So, if you're a child, the ankles are weak. The muscle development is not there quite yet, so there is a frustration and a bit of a longer learning curve.

Second: For parents, this is tough as they want their kids in a lesson, up learning quick so the whole family can ski/board together. Not going to happen for children one day in a snowboard lesson. Could potentially happen with skiing as they get the whole "pizza/french fry" thing going and can be off the beginner lift pretty quick. Brighton offers boarding lessons as early as 4 years old. They even have rentals now in a 70 cm snowboard!! When Bren started, the smallest one made was 80 cm. It shows there is an interest in younger kids learning, but there is still a tick up at 7-8 years old in the amount of kids signing up.

Third: According to Billy, the learning curve initially is slower for the snowboarders, but once they get going, they can advance quicker than skiers into pretty awesome boarders. The question becomes, as a parent, are you willing to get those extra lessons and be patient with your child until they learn? My advice, if they have that passion, you don't have a choice. Brennan has a little advice and if you're wondering about the outfit choice, he's a HUGE Steelers fan:

So from the mouths of babes, they have dreams and aspirations just like adults and it starts with having a passion and great role models. We are lucky to live in Utah where my kids are exposed to those Olympic hereos who stood just like Brennan and said "this is what I want to do."  I'm so happy I never said "no, you can't snowboard yet", because we certainly wouldn't be where we are today. I'll leave you will this video of Bren boarding. Keep in mind, I can't keep up and the video is shaky. If you have advice for parents or just want to share your experience, I'd love to hear it! 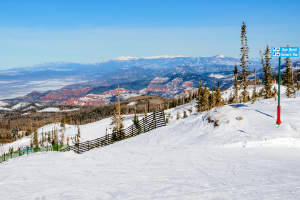 Terrain based learning at Brian Head! 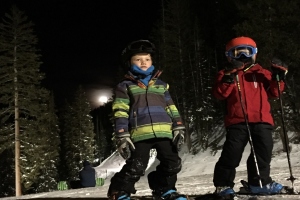