I don’t often find myself at chain restaurants but if a place is rumored to serve good food and have an atmosphere skiers might enjoy, I go. I’m happy to report that Texas de Brazil fits the bill.

Texas de Brazil is a churrascaria, featuring the tradition of churrasco-style cooking, where various cuts of seasoned meats—beef, lamb, pork, chicken and sausage—are slow-roasted over an open-flame, a cooking tradition adopted by gauchos, or Brazilian cowboys of Rio Grande do Sul region of Southern Brazil.

You can’t exactly transport the rich heritage of the Brazilian ranchland to a table in a shopping mall (it’s a gorgeous mall, by the way, City Creek Center, with tons of parking) but the perfectly seasoned, charcoal-roasted meats, carved at the table by the restaurant’s young “gauchos,” is enough of a glimpse to make one curious about the culture and cuisine.

This concept isn’t new, but Texas de Brazil is proud to have a native Brazilian gaucho as their culinary director since day one and is also still family-owned and operated. The menu is tight and doesn’t change much, to maintain the image and cultural behaviors of the region.

Upon entering the restaurant, diners are greeted with bold red walls and explosions of (faux) flowers. It’s a modern space, with lots of mirrors, sleek finish materials contrasted by Spanish-style chandeliers, and a floor-to-ceiling glass wine cellar (containing wines from all over the world with an emphasis on South American varietals).

The service is snappy and the best part is that you control the pace of the meal and your intake. It’s all you can eat for one price: $42.99 for all the meat you can eat and salad bar, or $24.99 for salad bar only. For big groups of hungry skiers fresh off a full day on the slopes, Texas de Brazil is a great choice. As soon as greetings are swapped with the server, the salad bar is open game, which is loaded with ample grilled vegetables—another churrasco dish—as well as green, grain and seafood salads, lots of pickled bites, imported cheeses and salamis, smoked salmon and a selection of soups. The lobster bisque was delicious.

After sampling the salad bar (be sure to put some chimichurri sauce on your plate to accompany the beef dishes), the parade of gauchos bearing swords of meat begins. Simply turn your paper disc to green from red (each guest has their own) and you will be offered one meat after another, more than you can possibly consume. It may be Brazilian, but the bounty is totally American. Back to the meats though: Every cut is perfectly seasoned and cooked, charred and juicy, just absolutely delicious. The picanha is the specialty, a tender sirloin cap with a flavorful crust. Only slivers are served, which is a relief because the men keep coming with filet, bacon-wrapped filet, braised ribs, lamb chops, pork ribs, leg of lamb, lamb chops, parmesan chicken…up to 16 selections. Pace yourself!

In between bites of meat, spoon a taste of pão de queijo (cheese bread) or cinnamon and sugar banana, meant to act as palate cleansers.

Oh, and then dessert. I don’t know how anyone could ponder dessert after willingly participating in such a meat fest, but it is tempting. I managed to fit in a bite of cheesecake and carrot cake with a coconut cream frosting but truly, the house cocktail, the classic caipirinha, was enough for me.

Texas de Brazil is a bit raucous and super polished, a well-oiled machine with a formula, but it works for a fun night in the city. Stroll the streets while the snow falls, recounting your day and walking off a “little” taste of the Rio Grande do Sul.

Note: This is a sponsored post by Texas De Brazil.

A Return to The Farm and Mountain Comfort Food 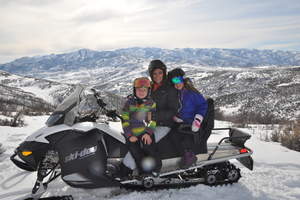