The Best Après Drink at Every Ski Utah Resort

Even in these unprecedented and uncertain times, there’s a ritual in this world of skiing and snowboarding that remains sacred. No matter what happened during your ski day—whether you get caught by a patroller going a little too fast down Docs Run or you're celebrating pow turns or perfect groomers—there will always be the consecrated practice aptly dubbed “après-ski” venerated by skiers and riders around your Utah mountain of choice.

Although we pledge to remain faithful to this sacrament, things may look a bit different this year. But wherever you choose to worship—be it at the traditional barstool or sipping a brew at your car—know that après-ski is an important rite and one to celebrate often.

To help you plan your season of devotion to après, I’ve listed Ski Utah’s (and my) recommended adult beverages available at each alcohol-serving Utah resort below. 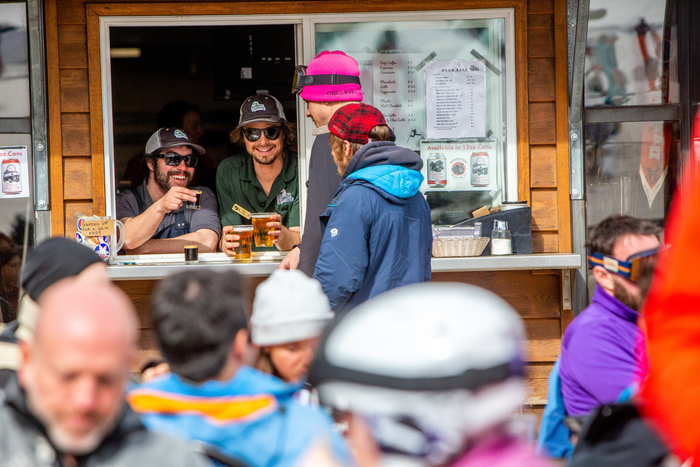 Whether you had the most unbelievable powder day or a fun few hours finding stashes from last week’s storm, Alta provides one of the most well-known après drink in the state: the Alta Bomb. It’s a double shot of espresso dropped into a PBR, meant to be chugged, so you can get a caffeine buzz while getting a little buzzed. The Alta Bomb is only sold at Goldminer's Daughter Lodge, so snag one (or two) at the end of the day. Just be sure to have someone drive you down Little Cottonwood Canyon.

While this article is focused on boozy drinks, Alta is the home mountain of my little brother, who doesn’t drink alcohol. So in his honor, I’m also including a non-alcoholic drink of choice at the resort. It’s called Susie’s Special—a chai with a double shot of espresso—and you can get this caffeine rush at Alta Java. You don’t need alcohol to be a ripping skier and enjoy the après-ski culture. 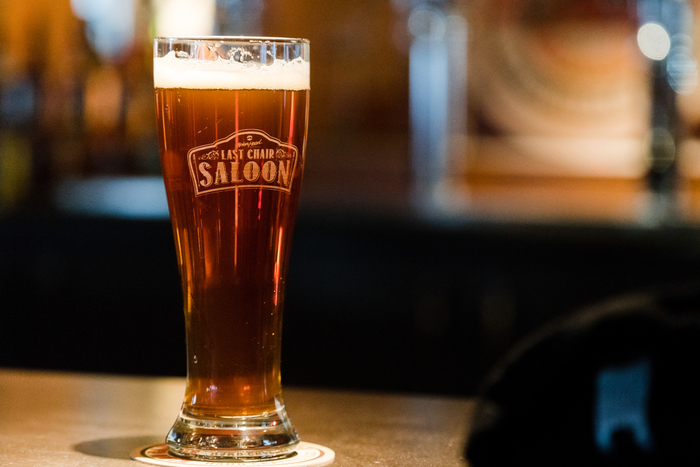 Though Brian Head doesn’t have a full bar, the locals down south say that the appropriately named Last Chair Saloon is the go-to on-mountain spot for an après beer after a day making turns. They offer a number of local beers, including Roosters Brewing's Blood Orange IPA, which is a solid beverage to toast a great day on the mountain with friends. 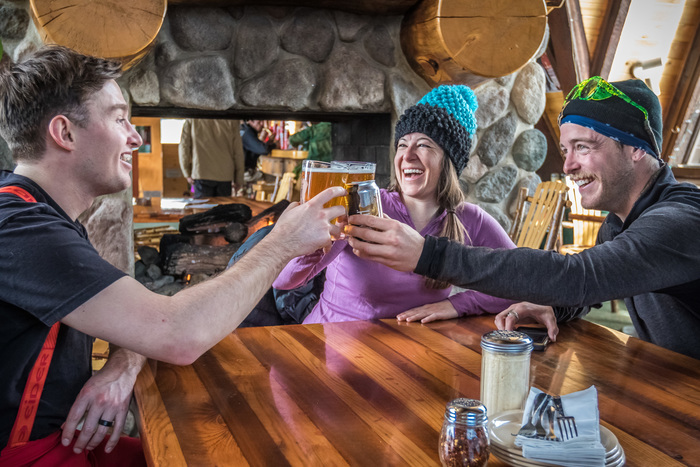 After a chilly day riding Brighton, head over to Molly Green's, a classic après-ski spot on the upper floor of an A-frame, to warm up by their cozy fireplace with an LMC. Named after the snowcat, it has peppermint schnapps, 151 rum, hot cocoa and whipped cream and as Molly Green’s manager told me, “It gets the job done.” 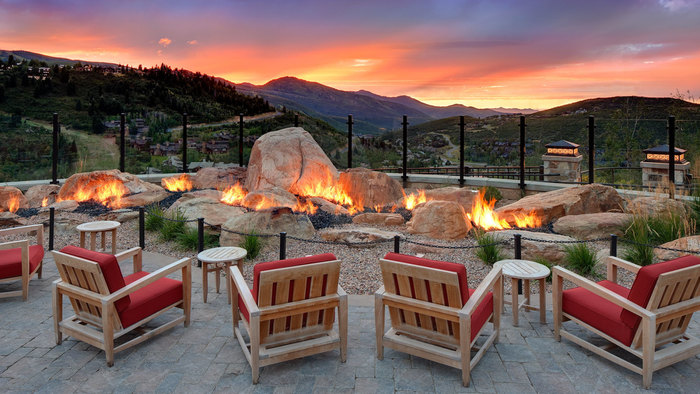 Deer Valley is my home ski area and while we generally drink beers in the back of our truck after skiing, whenever I have friends in town, I take them over to The St. Regis Deer Valley for the absolutely delicious 7452 Mary. Sure, it’s a little pricy, but skiing to the hotel and sitting on their stunning patio overlooking the slopes is unbeatable. The cocktail combines the St. Regis’ famous bloody mary mix with local vodka in a wine glass rimmed with black salt and includes a pipet of spicy wasabi-celery foam. It tastes luxurious and you’ll feel refreshed after a day cruising DV. 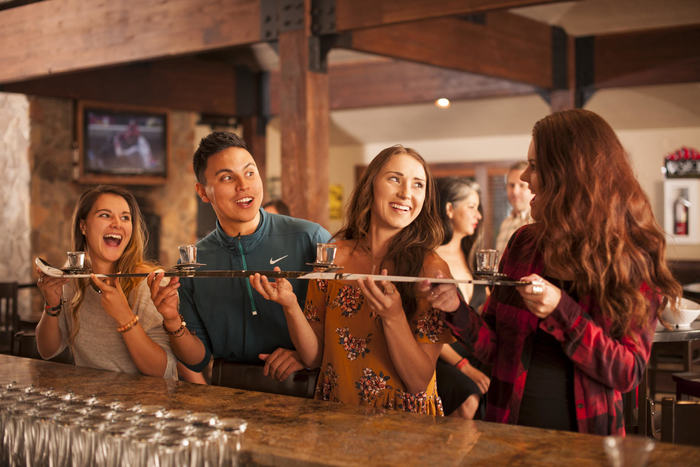 While Beaver’s Eagle Point Resort doesn’t have a lavish après-ski menu, after a day of family-friendly ski turns, you’ll want a solid brew. I recommend the Eagle Point Ale, a beer specially brewed for the resort by the much revered Moab Brewery. But if you want something harder, Eagle Point does boast a shot ski and a good whiskey list. 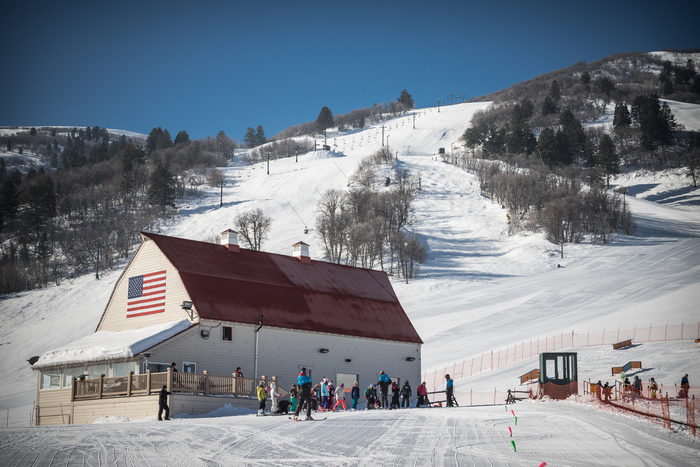 There’s no need to mess with a good thing. There’s one restaurant at Ogden Valley’s Nordic Valley—the Nordic Valley Cafe—and the establishment will always recommend the most classic of après drinks: the PBR. Get it while it’s cold. 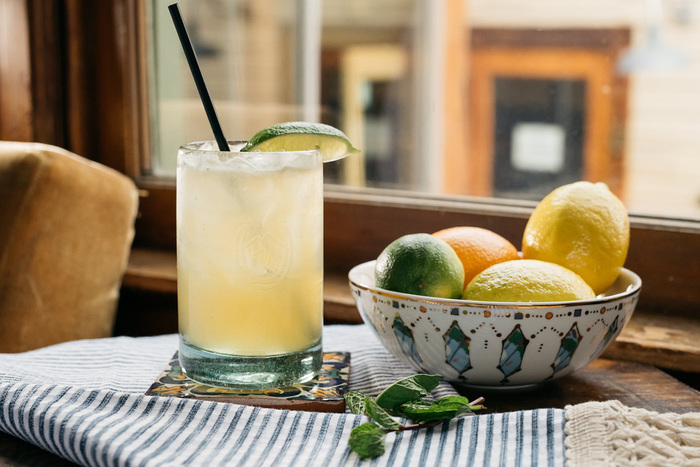 Park City Mountain has offered great bars around the resort over the years, but due to social distancing, full-service bars will not be open on the mountain this winter. But they will still be selling packaged beer and wine at most of the lodges, so snag your drink of choice and sit outside!

However, one of Park City Mountain’s best features is the ability to ski into the adorable town of Park City. And right at the bottom of Quit’n Time lies Park City’s famous High West Distillery and Saloon, a gorgeous restaurant where you can sample some of the tastiest whiskies this side of the Mississippi. I recommend the Dead Man’s Boots cocktail—a combination of High West’s American Prairie Bourbon, reposado tequila, lime and ginger beer. Park City Mountain’s town lift stops running at 4 p.m., so be sure to finish your après drinks in enough time to get back up and over via skis, or hop on the free bus back to your home base. 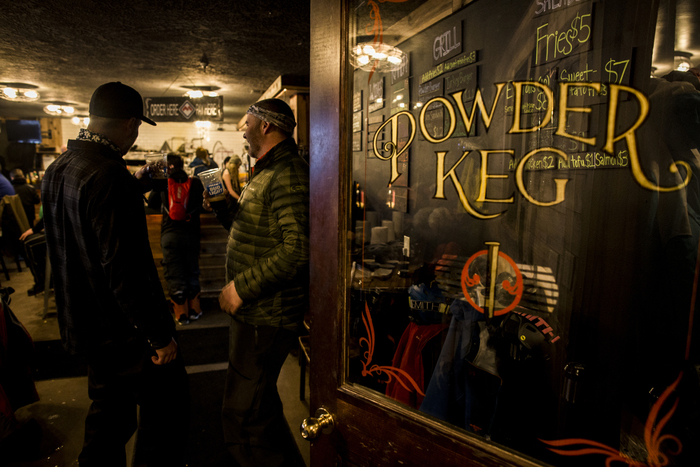 Powder Mountain sells only beer at their resort, and while you can get the classics at their bar The Powder Keg, Powder has come up a pretty killer collab brew with local company Uinta Brewing called the Pow Mow Pilsner. This year, only outdoor seating is available at Powder Mountain Powder Keg, but the view is beautiful and the beer is delicious. 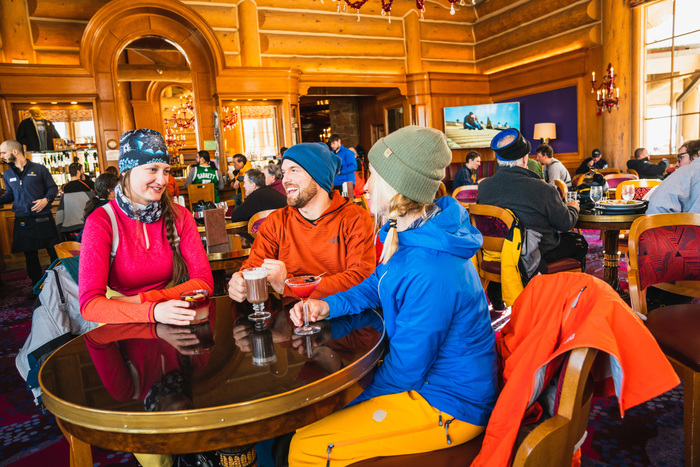 Stepping into Snowbasin Earl's Lodge, you’d expect an extravagant après scene to accompany the gorgeous decor—and you’d be right. After a day of skiing at of the most picturesque resorts in Utah, you’ll be craving something tasty and warm, so head over to the Snowbasin Cinnabar Lounge for their Bourbon Maple Cider. It’s made of High West Distillery’s American Prairie Bourbon, ginger liqueur, maple syrup and hot apple cider with fresh cracked black pepper and it pairs nicely with Snowbasin’s live music every weekend during après hours.

But breaking news in the aprés-ski scene, Snowbasin just added a new food and beverage spot for 2020–21 in the Snowbasin Needles Lodgecalled The Overlook and because of that, we're giving them an additional recommended aprés drink. Check out The Overlook Coffee, which combines Porter's Peanut Butter Whiskey (local from Ogden!), Godiva Chocolate Liquor, Daily Rise Snowbasin-Blend coffee topped with whipped cream. 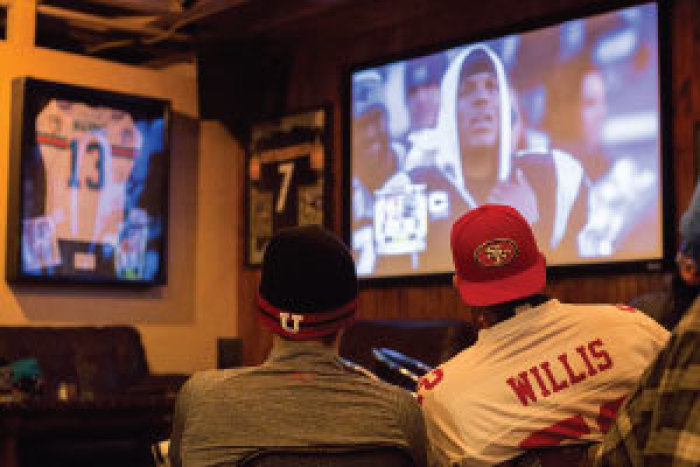 Some resorts have fancy restaurants and high-end bars, but Snowbird has Snowbird The Tram Club, and it’s perfect. You look out of place here if you’re not nursing wind-burned cheeks and housing nachos, so the only thing that makes this scene better is the esteemed shot and a beer that puts a smile on après-ers’ faces everywhere. The deal? Buy a shot and get a draft for $1. My favorite combination is tequila and a PBR, but you do you. 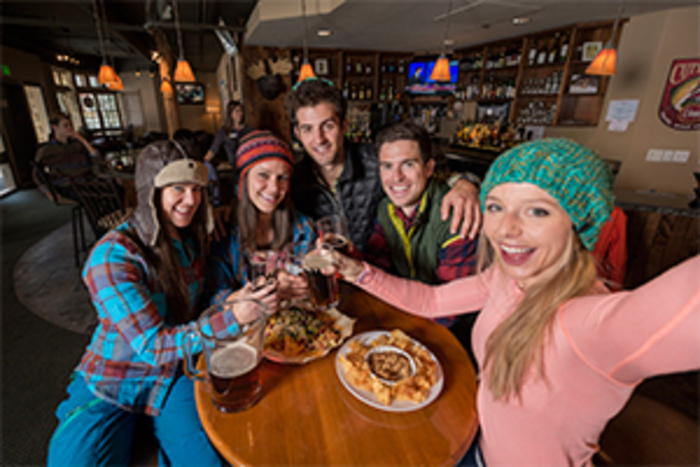 Solitude has gained popularity over the past few years with the advent of the Ikon Pass, but many tourists and visitors still don’t know of the Thirsty Squirrel, a little bar at the base of Apex. It has pool tables, the game on TV and a pretty unbelievable beer selection for a ski mountain. My favorite drink after a day chasing rope drops on Honeycomb is the Marvella from Red Rock - Park City Junction, but at 11%, it’s hard to drink multiple. So instead, my recommendation is my husband’s favorite—hard seltzer on tap. 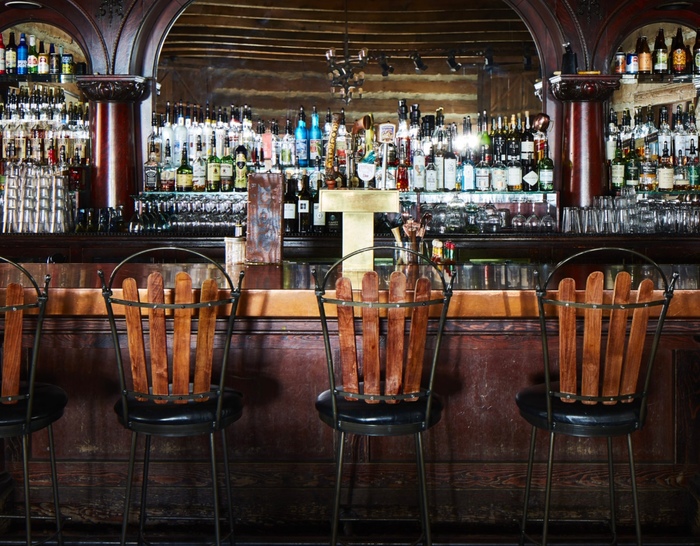 There's nothing like sidling up to the gorgeous Sundance Owl Bar tucked into the Sundance Mountain Resort base, and feeling like you've gone back in time. Once frequented by Butch Cassidy, the restored 1890s bar offers delicious cocktails that pair perfectly with its old-school interior. The Owl Bar recommends their Hot Toddy as an aprés warm-up—Sugar House Rye Whiskey, hot water, lemon, agave, clove, rosemary, cinnamon, ginger and cayenne—but for your second cocktail, I'd go for the Naked Tickle Fight—spiced rum, coconut rum, pineapple and cranberry—because I'm determined to learn the circumstances on which the name was born. 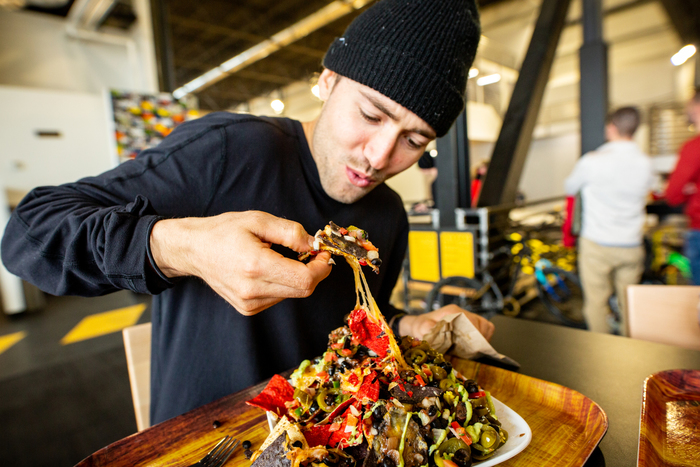 The newest member of our Ski Utah family, Park City’s Woodward hides a cool little bar inside their massive indoor/outdoor facility called The Grind Café. Whether you’re waiting for your kiddo to finish a camp or you’re celebrating a new trick learned out on the park, try the Hotlaps Honey Apple Hot Toddie. It combines Black Feather Bourbon, hot apple cider, honey, fresh-squeezed lemon juice and is garnished with a lemon wedge and cinnamon stick. Delicious.

While this is a solid list to get you started, I’m sure we missed something. Let us know your favorite spots and drinks in the Utah après-ski scene! 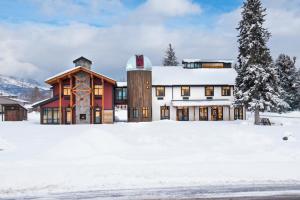 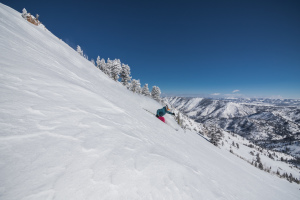 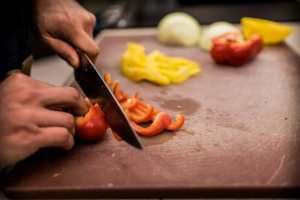