I've never done the Alta-Bird connect before. The closest I've come is hitting Keyhole from the Wildcat lift at Alta a couple of years ago when there was about 16" of new. We lapped Keyhole 6 times until people finally caught on that it was open and the bus that took us from Snowbird back to the Wildcat base filled up faster than the Sitz after the lifts close.

But that's not the true connect. Like many of you I've been at Alta coming off the Sugarloaf Lift and skied past the turn stalls. But I've never experienced the joy of crossing the border.

Unfortunately today wasn't going to be my first. But my buddy Chris has a season pass at Snowbird and another buddy had an extra Ski Utah Gold pass which gives access to all the resorts. So we decided to meet at the Baldy gate. After spinning a lap through the Glory Hole from the Germania lift I rode Sugarloaf with a couple of gals who were headed back to Snowbird. They couldn't say enough about how fun it was to go back and forth between the two resorts.

Bidding goodbye to the ladies I met up with Chris who was waiting at the gate. I gave him the Ski Utah pass and with a "beep" of the gate he had crossed the border into Alta.

Taking the Secret Saddle if you stay high and skiers right traversing under the big cliff and around the lake you'll end up near what locals call the Bat Cave. The Bat Cave is a tight chute on the far skiers right of this zone that is just wide enough to straight-line at the top and then with whipping speed you exit onto a wide open apron. Adrenaline rush at its finest. 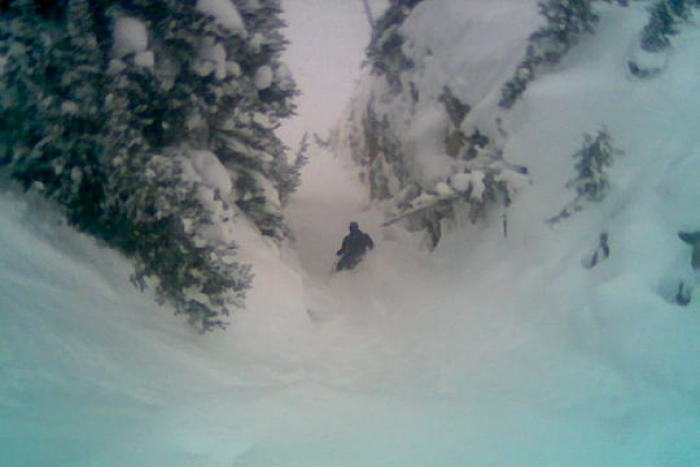 There is a tree that at the time if you were not careful it'd take your head off about half way down. Since this photo there have been a couple of storms and the tree is gone - either buried or removed.

There are other options to drop into this area but this entrance known as the Bat Cave is spicy and worth checking out. Since I didn't have my camera along with me the above camera phone image of Chris half way down will have to work.

While Chris said that Snowbird was a bit scratchy today we found snow falling early on and untracked stashes amid cut up powder from the previous storm. We hit Glory Hole a couple of times and since visibility was a bit limited in the morning we headed for the tree zones of Supreme. It was the right call. A couple more laps here and we had an appetite for whatever the Watson Shelter was cooking up.

The prices at the Watson Shelter are roughly the same as the other offerings at Alta but the views can't be beat. There are two options at Watson Shelter; 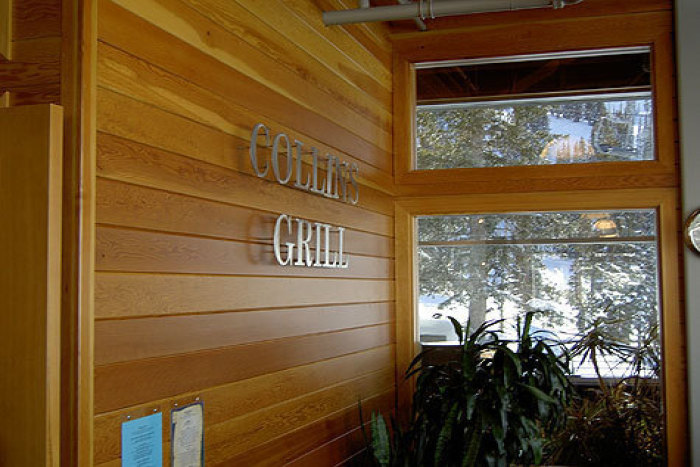 The other option at Watson Shelter is the cafeteria style which despite the visual “cafeteria” may create this is a pretty good option. I had the Baldy Burger which is one of the biggest burgers I've ever eaten. Think everything on it, everything. Add to that a bucket of fries which can easily be split between a few people and you're set. Two Baldy Burgers and a med bucket of fries set me back $21. 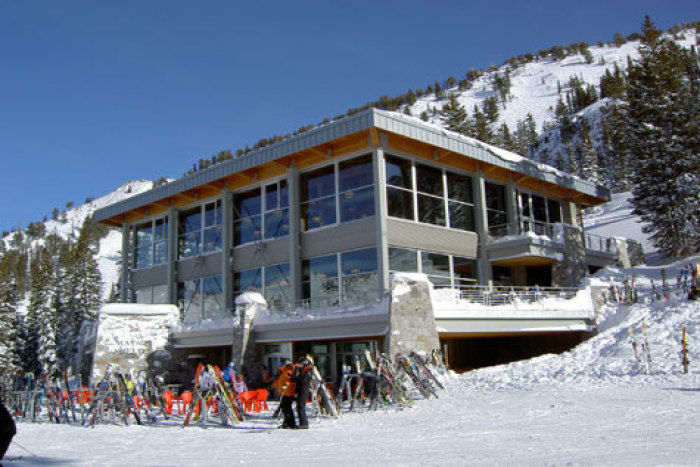 After the late lunch we made a couple more laps and called it. The Baldy Burger was talking its toll and I had to call an audible. I'll consider splitting a burger next time and getting a med bucket of fries to top it off. My wallet will thank me and unless you've got a bottomless stomach you'll be better suited for a full afternoon of skiing. 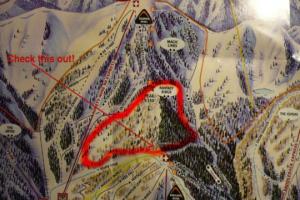 Top Runs at The Canyons

Snowboarding and Skiing? There must be a better werd

Tele Tribe at The Canyons

Top Runs at The Canyons

sweet dreams are made of these