From gloom to skiing

It was the 1930s and the country was mired in the Great Depression. The mining boom along the Wasatch had gone bust. Miners had tunneled into the mountains, hauled off the ore and left. Pioneers had stripped away the trees and granite for building materials. Hungry sheep nibbled away the last remaining vegetation. Alta was a wasteland at the top of Little Cottonwood Canyon, and it was often slammed by avalanches and mudslides.

Then several events occurred. Congress established the U.S. Forest Service and charged it to find a use for the vast undeveloped lands that it was stuck with. Almost simultaneously, Scandinavians thronged to Utah and organized ski jumping competitions that brought whole towns out to watch. Excited by the jumping, citizens began to put on skis for winter recreation.

And then, just one day after famed Norwegian skier and ski jumper Alf Engen became a U.S. citizen, he took a job managing a Civilian Conservation Corp camp near the base of Big Cottonwood Canyon. The Forest Service recognized his powerful cross-country skiing ability and sent him up the canyon to do a feasibility study of barren Alta.

Engen looked down from Catherine Pass into Alta and said: "Ya, I think Alta would be good for skiing." He added that the first tasks would be to chase the sheep back to Heber and close hundreds of open mine shafts that riddled Alta. 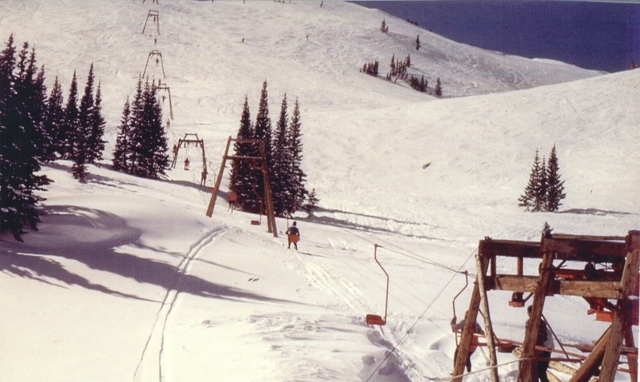 Plans developed, and in 1938 the enthusiastic Winter Sports Association made a deal to buy the old aerial tram that had carried ore from Alta's mines down the canyon to the Tanner's Flat rail head. The aerial structure was torn down and rebuilt on the face of Collins using timbers from mines for towers, phone poles to support the cable and chairs that replaced the ore bins.

But the whole contraption was plagued by so many mechanical problems that an old timer said he carried his lunch in his pocket so he wouldn't starve if the lift shut down for a long time. Finally, in mid January 1939 the Collins lift ran for most of the day, making it the second  chair lift in the world. By then the lift had a moniker: "Men were of steel and towers were wooden." Lift rides cost 25 cents each or $1.50 for all day.

During 1939 the Rio Grande Western Railroad took action attempting to compete with Union Pacific Railroad which was developing Sun Valley, home of the world's first chairlift. The Rio Grande contributed $25,000 to construct Alta Lodge for overnight guests and build a J-bar to Peruvian Ridge.

Other lifts followed, including a funky but unsuccessful "barge" that pulled several  skiers at a time uphill. But the story of Alta's lifts is wrapped with the Collins lift – and it was a steep learning curve. Chairs hung so close to the ground that they were often buried by heavy snowfalls. Skiers would get free skiing if they helped dig out the lift. As snow piled up through the winter, the lift corridor became a deep trench.

In 1949 the wooden towers were finally replace by steel towers, and in 1973 Collins was upgraded from single chairs to a Yan double chairlift. Then in 2004 a Garavanta quad chairlift replaced both the Collins and Germania lifts. Looking back, the original Collins chairlift was named  one the "100 Treasures of Utah" by the Utah Museums Association.