Avalanche Guns and Skiing in the Dark

My friend Johanna Kirk submitted this awesome story a while back about going out with ski patrol at Snowbird to shoot avalanche guns. It is so easy to forget the amount of effort resorts put into snow safety so we can continue to enjoy worry-fee powder days. Check out Johanna's account and feel free to check out her blog as well at: http://joshutterbugmama.blogspot.com

Avalanche Guns and Skiing in the Dark 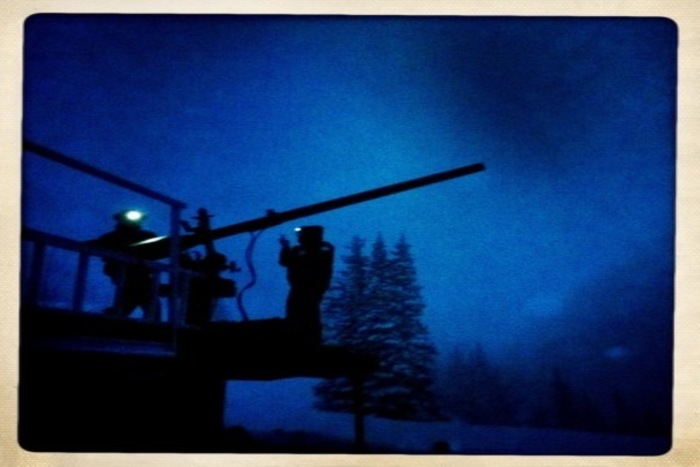 I'm skiing blind. It's pitch black and cold. I concentrate on the sound of the skier in front of me somewhere in the dark. He takes a left, I think, over what seems like an edge, and down. I bite my lip and follow blindly. Come what may. The slope gets steep, really steep, and I get the sensation that I could drop off into an invisible abyss at any moment.

The powder hits my face as I'm turning through the deep snow. A strange dream-like rhythm of breath and turn, breath and turn. All I can see is the small area lit up by my headlamp. A tiny spot of light, illuminating the falling snowflakes, and the rest, darkness. A few hundred yards ahead, I suddenly see a tiny light. It's Chris turning his head, probably watching my little light make its way down the mountain, like a lone firefly in the night. It's enough of a glimpse for me to see what direction to aim for. I relax my shoulders a little and continue down. Somewhere behind me, I hear faint sounds of turns by Dean, the ski patroller picking up the rear of our small group.

One thought resonates over and over in my mind: "JUST DON'T FALL". I have a couple of close calls, as my knees buckle when I ski over invisible bumps of hard pack under the soft new snow. Mind over matter, I feel my way down, trust my instinct and stay on my feet. "Thank God" I whisper as I wobble but remain upright and eventually reach the two little lights in front of me: Mike, the ski patroller, and Chris, my husband. The four of us eventually come to a stop and I see the barrel of the avalanche gun towering above us a few feet away, up on a big metal platform. We're here!

A few hours earlier, as the snowstorm was hitting Salt Lake with ferocity, my phone rang. It was my husband Chris, and judging by the sound of his voice he was excited. "Can you believe all this snow? Tomorrow is going to be epic"! He quickly blurts out predictions of powder depth and possible road closures. He wants to go up the canyon right now before it closes to sleep at his cousin Trindl's in Alta and thus bypass the crowds and morning commute up the canyon. I'm feeling lukewarm on the idea.
I'm already cozied up inside, fire lit, snow blazing outside, dinner cooking and a glass of wine in my hand. Staying home sounds pretty comfortable but his enthusiasm makes me waiver, a bit. I'm thinking he'll change his mind when he gets home.  A few minutes later he bursts through the door and says he's set it all up. We're staying at their place and we're meeting up with Mike, our ski patrol friend at the bird in the am. He's taking us out to shoot the avalanche guns, something Chris has wanted to do for years. He's practically bursting with excitement. One look at his face and I have to give in.

I manage to calm him long enough to have dinner and put the kids to bed. My family is in town over the holidays so we're lucky to have built-in babysitters at the house. We pack up and then drive in the night up Little Cottonwood Canyon with the storm raging around us. 35 minutes later we pull into the small town of Alta, where every car seems to be buried in a thick blanket of snow. It's cold. As we park, the Marshall pulls up. They are gearing up to close the road for the night and interlodge the area for risk of avalanches. We give them the names of where we're staying and get permission to park by the UDOT spaces.

There's no road to Trindl and her husband Chris' house. We grab our skibags and sleeping bags and begin trudging through the snow up the mountain. We pass a blinking sign for ski tourers to check their avalanche beakons before heading up Mt. Superior. Can this be right? Do they hike like this every day to get in and out of their place? Apparently they do, and I quickly understand why they're in such great shape as I stumble upwards in deep snow breathing heavily.
After about 10 minutes we see something. Trindl is turning on and off her living room light, and her small cabin blinks like a lighthouse signaling to lost ships in a storm. We finally reach it and despite the relatively short hike, I can't help but feel relieved to be inside in the warmth. Trindl greets us and we set up our sleeping bags on their floor. Her husband Chris, who works for UDOT and handles avalanche control of the canyon and roads, barges in through the door shortly after us at 11 p.m., covered in snow after a long shift in the cold. He gets to sleep in tomorrow as he has the "late" shift at 5 a.m.. The other guy starts at 3:30 a.m. Whatever they're paying these guys, it's not enough, I think to myself. (A thought I repeat continously during our subzero adventure that continues the following morning with him and skipatrol at Snowbird).
We quickly settle in our sleeping bags. Not a lot of sleep ahead with alarms set for 5 a.m. I read a little, then turn off the light. Blink blink....I'm wide awake in the dark and feeling a little nervous for the coming events. Tossing and turning, 5 o'clock comes too quickly and we're up again. Still pitch dark, snow is still falling but lighter now. We dress hurridly, strap on avalanche beacons, backpacks and shovels and Chris guides us down the path with headlamps to the road and drives us down to Snowbird. The area is interlodged, the roads are closed, and the only vehicles out are huge machines clearing the parking lots and roads.

At Snowbird everything is dark.. We walk to the tram, our boots echoing as we make our way through the empty building.  I would kill for a cup of coffee and I look longingly around for a sign of an open store but everything is closed this early. Up at the tram, a couple of ski patrol are pacing the floor. We meet up with Mike and Dean, Assistant Director and Director of Snowbird Ski patrol.

A small group gets on the tram, patrol, tram operator, two affectionate avalanche dogs, and us. The tram slowly makes its way up the mountain in the dark.  The regular 5 minute ride takes twice as long since they had to knock off the rime on the cable, and we finally emerge on top of a frigid peak and make our way into the patrol shack on the top. Mike brews coffee and I nearly cry I'm so grateful. Something warm and familiar in an unfamiliar world. I feel safe and excited. Dean and Mike get the instructions of how many shells to shoot and where and silently give each other a quick nod and I gulp down my small cup of coffee and strap on my headlamp as we head out the door and back out in the darkness.

At the avalanche gun, my peaked attention to detail start dwindling quickly. The guys and Chris talk excitedly about ex-military artillery, 1950s shells, Howitzers, range, etc. I can't keep track of exactly what kind of gun this is or the artillery we're about to shoot but by Mike and Dean's strict safety protocol and repeated warnings, I know what I need to know:The gun is big and artillery heavy and I better stay out of it's way if I want to live. That's all the detail I need. 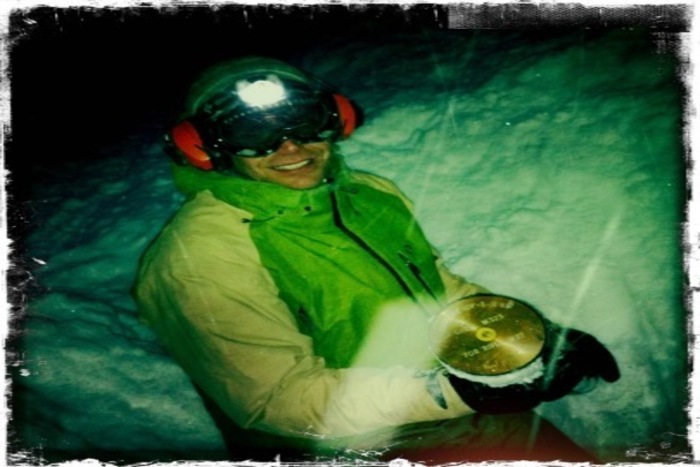 The freezing cold prevents me from photographing much. I resort to just taking out my cellphone a few times and in seconds my fingers freeze. It's still too dark to get any proper photos so I helicopter my arms around to get blood back into my frozen digits. The gun is powered by compressed gas, and after the gas is turned on, the artillery loaded and the four of us safely behind the protective concrete wall, Mike and Dean give us earplugs and big earmuffs. "Breathe out when I say fire", Mike yells with a smile and Dean adds "prepare to flatten your eyeballs."

He yells: "FIRE" and as the big gun explodes I get the sensation of someone kicking me in the chest. WOW, it's not just loud, but so loud my whole body shakes. We all burst out laughing with excitement and relief.

Four pieces of artillery later, we pack up, lock up, put up the protective fences around the gun bunker and ski down the remaining way in early dawn light. We're done, it's 7:30 a.m. and most everyone else is still sleeping. We ski two more trams before the mountain officially opens and by the time we sit down for breakfast to thaw our frozen toes and fingers, the crowds arrive for fresh tracks. Well, almost fresh tracks that is :).

Faceshots for Everyone! Pow Video

Stein Eriksen Is Back At It

The Future of the Canyons are in your Hands.