Eagle Point opened for business yesterday with smooth, buttery skiing and untracked runs to be had from first chair to last.  Before reading on, it’s ok to admit that you’ve never even heard of Eagle Point, a resort in its second year of operation.  Eagle Point is a ski resort with incredible north facing terrain that is found in southern Utah. To be exact, 18 miles east of Beaver sits Eagle Point which is gorgeously framed by Delano and Holly’s Peak.  While Eagle Point’s remote location requires a healthy road trip the adventure is well worth the effort, as never before had this furry Yeti skied all morning to realize that by noon, not a single person had rallied any other turns over the Yeti’s lift-line run.

This year alone has provide quite a wild run for resort management, as Lane Tucker, Eagle Point’s marketing director was the first to admit that he was incredibly relieved and beyond pumped to finally get the season started.  Low snow totals this winter kept the resort from opening until yesterday, January 27th, 2012.  Lane stated that Eagle Point’s season is “all on mother nature. . . we are an all natural resort.”  Better late than never, last week’s four foot storm allowed the resort to open with 75% of all terrain open.  Relying on mother nature worked out just fine last year, as the resort scored 650'' of snow.  With that sort of reputation, far more snow has to be on its way for the remainder of this season.

Three great months of skiing await you at this gem of a resort that delivers uncrowded slopes, north facing steeps, a mountain taxi and a place that no one has ever heard of.  It’s safe to say that your next road trip has been planned. 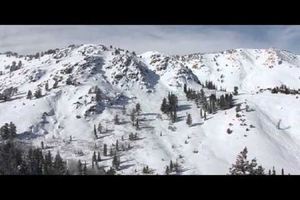 Back to Brian Head