For George Jedenoff, 95, skiing is a way of life. You’ll find him skiing Alta’s slopes every day when he’s in Utah, and he still has a knack for finding untracked powder days after a storm. What’s more, he holds a Lifetime Season Pass to Alta – and he’s still using it.

George was transferred to Utah in 1960 to be the general manager of the Geneva Steel Plant. He was athletic and he thought he should take up skiing. He learned from the best: Alta’s legendary Alf Engen, Snowbird’s iconic Junior Bonous, and Earl Miller, the granddaddy of release bindings.

“While buying my first pair of skis in Orem, I ran into Earl Miller who offered to teach me how to ski. Of course I used Miller bindings – the only safe bindings available at that time. We used the rope tow at Alta Lodge for my first lesson.”

Miller demonstrated how his bindings released by showing photos of himself making some sensational falls, George said. One day he paid me quite a compliment. He said: “You know, George, you have made some falls that I have never seen before!”

He grew to love Alta’s powder skiing with and without falls.

When he was transferred to Indiana in 1967, community leaders honored him with a gift to lure him back.

“For my community service in Utah, I was honored by KSL Radio and Eldon Tanner of the LDS Church. They presented me with a Lifetime Season Pass to Alta.,” George said. “I have made good use of this wonderful present.”

But how does a 95 year old stay in shape? He has five fitness machines in his home’s basement and he works out every morning before breakfast. He’s motivated by his love of skiing.

He’s the oldest skiing member among Alta’s Wild Old Bunch, the group of senior skiers that enjoys skiing and socializing together.

Here's recent footage of George doing what he does best in his debut ski film, Forever Young!

How do seniors kick up their heels during Spring Break? 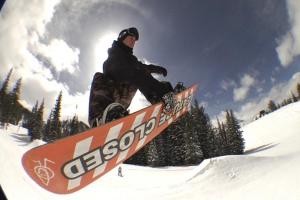 How do you still “live the dream” when you quit working for a ski resort?