Snowbird’s tram station on Hidden Peak offers one of Utah’s, well actually, the planet’s most stunning views. It straddles the intersection of three high-mountain drainages—Mineral Basin, Gad Valley and Peruvian Gulch—that are towered over by craggy granite peaks. It’s a jaw-dropping sight even if you don’t ski, and for skiers and boarders, it presents a stoke-inducing buffet of terrain. However, until now, besides the views, there wasn’t much at the top to linger for. But this season you’ll be able to stop and take it all in at the new Summit Lodge, a dream 44 years in the making.

“What we’ve had up there for more than four decades is a construction trailer,” says Operations VP Dave Fields. “It was put up there to build the tram and we’ve used it as a warming hut ever since.”

Snowbird’s founder Dick Bass was a man who liked to dream big. He was the first man to climb the world’s highest peaks on all seven continents. When he met Alta Lodge’s manager Ted Johnson in the 1960s, the duo teamed up and Bass brought his mountaineer tenacity to open Snowbird in 1971.

“From day one Ted Johnson and Dick Bass wanted to build a lodge on Hidden Peak,” Fields says. “It’s an amazing time to see it coming into reality.”

And fitting. Bass passed away last July and the new Summit Lodge on Hidden Peak will open this season and serve as a powerful memorial, the culminating project of his Snowbird dream.

“Dick always felt that Snowbird should be a place for everyone,” Snowbird’s General Manager Bob Bonar explains. “While he was able to climb the Seven Summits of the world, not everybody could do that, so Dick made sure this building was a nice spot for everyone to enjoy.”

But looking around at the rugged terrain off the tram, it’s plenty easy to see why the lodge wasn’t the first priority four decades ago. Bass and his crew had their hands full learning how to tame this mountain. Bonar saw it all come to pass. One of Snowbird’s first ski patrollers, he can tell you there was a lot of learning and improvisation in the early years.

“The first year we were open was a big snow year, especially in the fall,” Bonar recalls. “So we were immediately dealing with the challenges of our location.”

By “challenges” Bonar means avalanches. Little Cottonwood Canyon is one of the snowiest places on the planet. An average of 42 feet of fluffy flakes fall on this snow-rich canyon each winter.

“We were pioneers,” Bonar says. “We had to wrap our heads around this part of the canyon and figure it out. The safety of our employees and guests has depended on it.”

Bonar is being modest, of course. While managing the huge snowfalls and steep slopes of Little Cottonwood Canyon, both Snowbird and Alta’s safety crews along with the Utah Department of Transportation literally wrote the book on avalanche control in America and have laid down impressive safety records.

But that was the reality Snowbird had to work with. Remember, this wasn’t just testing out a business plan and sitting in boardrooms for interminable meetings. This was real work, at elevation, in all kinds of weather. An effort that took a lot of passion and maybe even a little crazy to get off the ground. And, after 40-plus years of work, they finally got that dang lodge built up on Hidden Peak.

“Dick’s determination was inspiring for all of us,” Bonar says. “When he climbed the Seven Summits, it was not an easy feat for anyone, much less a guy in his 50s with little climbing experience. His ability to stick with it inspired a lot of us from those early days to stay at Snowbird and help him realize his dreams here.” 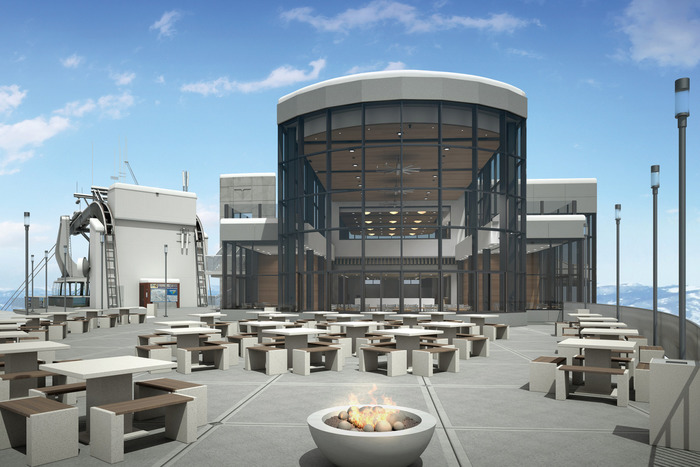 The 23,196-square-foot lodge will match and complement the existing tram station in height and will offer views that only tram maintenance crews have seen before. In keeping with Bass’s vision, the building is ADA compliant and open for everyone of all ages and abilities. In every season, there is finally a reason to linger at the top of the tram, a refuge to soak in the views and take a moment to think about the man who, in a sense, got you up here: Dick Bass.

Did we mention there are over $100 million dollars in Utah ski resort improvements becoming a reality this winter? Check out the photo gallery showcasing the new gondolas and hard work. Read more about the new Park City, the largest resort in the US, or check out the changes at Solitude. 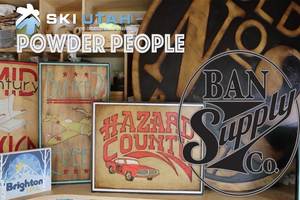 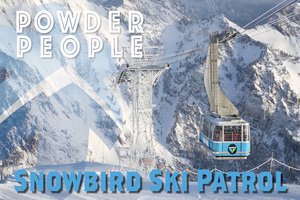 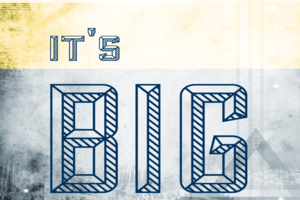 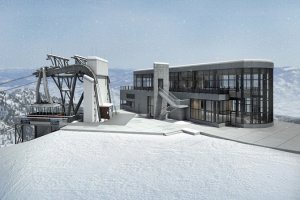