Ski industry icon Junior Bounous, 88, is a mover and shaker who continues his passion to keep people skiing throughout life. In a nutshell, he tells seniors: Just "keep moving."

His career spans nearly seven decades with a list of accomplishments and awards that's longer than my arm: Intermountain cross country and national gelande jumping champion, national race course setter, ski patroller, founding member of Professional Ski Instructors of America, father of today's American Ski Teaching System, advisor to ski manufacturers, ski trail designer for resorts including Snowbird, and director of skiing at resorts in California and Utah, including Sundance and Snowbird where he has inspired three generations of skiers. He was inducted into the National Ski Hall of Fame in 1996.

He takes his own "keep moving" advice. To celebrate his 80th birthday he skied Snowbird's treacherous Pipeline chute lined with jagged rocks with no room for error.

Bounous was the youngest of six children in an Italian farming family in Provo, Utah.  His first ski experience was on the family farm at age 8 when he attached barrel staves to his feet and skied down a slope trying to miss the manure piles at the bottom.

Fast forward to 1948, when at the age of 22 he became one of the first certified instructors in Utah, and he began a long-lasting relationship with his cherished mentor, Alf Engen. For the next 10 years, Bounous was Engen’s primary assistant in Alta’s Alf Engen Ski School known worldwide for teaching students how to ski powder. His ski career accelerated from there. Once Snowbird ski resort opened up in 1971, Junior Bounous became the first Ski School Director.

Balance and coordination are major factors for senior skiers. "Older people have trouble with their eyes and ears, but you can extend the life of both senses if you practice," he said.

Cross train is his advice. "Stay active. Do not confine yourself to just skiing. Play golf, ride a bike, take a walk. Do whatever you enjoy – but do it. It will help you get out of the bathtub, get out of the car, and go up the stairs."

Improve your balance by skiing slightly different terrain and snow conditions. Don't get stuck skiing on only a favorite trail or only on bluebird days. "It boils down to just doing it. Stay active in as many ways as possible," he said.

In addition, "Find somebody to ski with. Many older people drop out of skiing because they don't have anyone to ski with. They are physically capable, but they've lost the social fun of skiing."

Take Junior's advice: Just do it.

Harriet Wallis has been a ski writer, editor and photographer forever. She learned to ski on a dare when she was in her mid 30s and has been blabbing about it ever since. Read more from Harriet on Ski & Snowboard News. 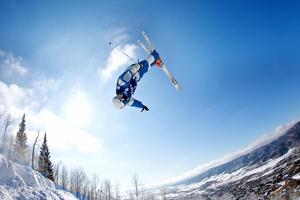 Heber Valley - Something For Everyone