As part of Ski Utah's never-ending quest to tell the stories of Utah's colorful characters whose lives revolve around the snow and mountains, in this latest Powder People installment, Ski Utah sits down with Greg Paul.

Greg Paul recently stood on top of the world after his third attempt. This past May, Greg was the first non-professional, American climber in three years to summit Mount Everest. 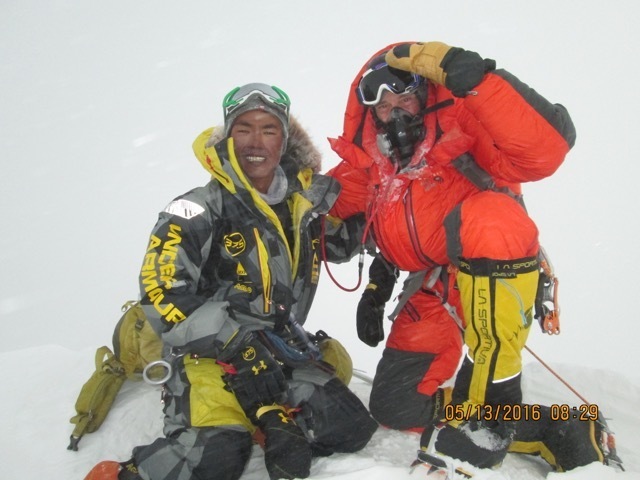 Friday, May 13, 2016, Greg stood on top of the world with Nawang Tenzing at 8:05 a.m. On the final accent at 5:45 a.m. the pair were hit by an Everest squall, delivering 35 mph winds, white-out conditions and a windchill factor of minus 30 degrees. Finally reaching the top of the world, the two friends spent 40 minutes on the summit. This rest of this story takes us behind the scenes and into Greg's psyche leading up to, and after, Greg's successful foray to the top of the world. Ski Utah: How long have you had your sights on Mount Everest?
Greg Paul: Ohhhh boy, I guess ever since I started loving the mountains. I grew up in New Jersey and saw real mountains for the first time when I was 14, while visiting relatives in Utah to ski. In my late 30s I started climbing volcanoes such as Mount Shasta and Mount Rainier then Elbrus when I was 43, Aconcagua at 45 then Denali at 50—this natural progression leads to Everest. In January of 2012, I went out to lunch with Utah native Nancy Feagin who was the 11th American woman to climb Everest. Another friend, Martin Frey was there as well, whose climbed the seven summits and sailed the seven seas. What a slouch, ha ha. Martin introduced me to Russell Brice, a legendary Everest expedition leader who mentioned that he had a spot on an Everest trip in March. How could I say no when everyone at the table had climbed Everest? What a fateful lunch that was! I spent the next two months at REI buying equipment. 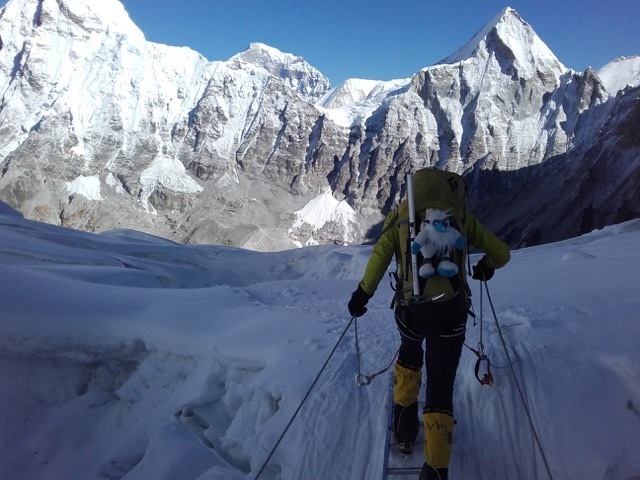 Ski Utah: What did your training schedule look like?
Greg Paul: I've always used my backyard, the Wasatch mountains to train. That’s the beauty of living here. In the winter I try to ski tour as much as possible and the rest of the year I tackle the longest mountain bike rides and races I can find. And for the few weeks leading up to the expedition, it was important for me to really eat and eat. Sure I was fit, but I added at least an extra five pounds before flying to Nepal.

Ski Utah: Do you really have two bionic knees?
Greg Paul: Yes, it's the real deal. I have two artificial knees. In 2008 I had my right knee replaced and then in November of 2012, after my first Everest expedition, my second knee was replaced. After the second knee replacement, I followed an intense training program that involved lots of stretching, Crossfit and, against doctor's orders, skiing as early as Jan 1st. Skiing was a key to my fast recovery. . . as long as I was careful. One it was fun and two, it worked the correct muscles. The following fall I took my knees for a test drive and attempted the north ridge of Ama Dablam—the Matterhorn of the Himalayas. Then feeling ready, I went back to Everest in 2014 for my second attempt as my 2012 expedition was canceled due to dangerous conditions on the mountain. Everest went unclimbed for two consecutive years. Unfortunately, the 2014 season ended abruptly when 16 Sherpas were killed in an avalanche in the Khumbu Ice Fall. Everest was “shut down” again in 2015 when an earthquake caused an avalanche that swept through base camp killing 19 people.

Ski Utah: What’s the greatest lesson you've learned from the mountain?
Greg Paul: What goes around comes around. Somehow, after all these years, five trips to Nepal and three attempts to climb Everest, it all worked out. Trying to give back, karma is the backbone of Buddhism and a dominant theme among the Sherpa people. Since my first trip to Nepal I've tried to make it a point to be more mindful of, and appreciative of, the Sherpa people and to give back when I can. The Mother Goddess of the world, Sagamartha ( the native name for Everest) was on our side on summit day, she was benevolent to us. I almost felt watched over and protected by the mountain. It was magnificent! 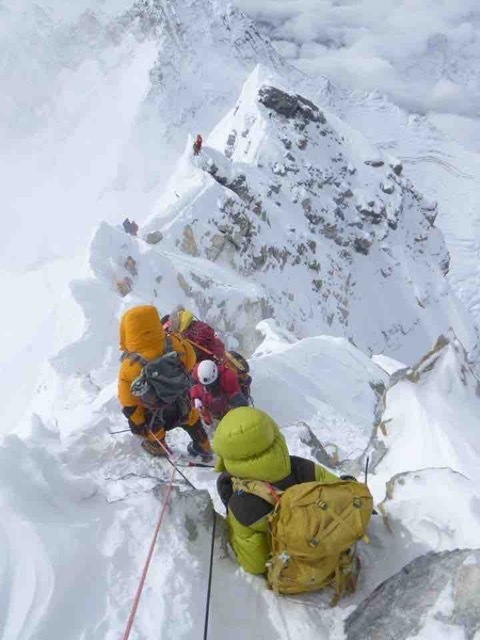 The Hillary Step pictured here with Tibet dropping off 12,000 feet to one side and Nepal, 10,000 feet to the other.

Ski Utah: While on the mountain, what was your high five moment?
Greg Paul: Nawang and I were the last to leave the South Col and, passing 30 people, the first to summit on May 13. Serendipitously, we had the summit all to ourselves for 15 minutes. I was the first commercial expedition member of the season to come off the summit and out of the icefall into basecamp. Shortly after entering basecamp I was greeted by the Ice Fall Doctors: the highly respected Sherpas who on a daily basis maintain the ropes and ladders through the precarious Ice Fall. This is easily the most dangerous job on earth. Anyway, they all gathered around me and nearly carried me to their tents to congratulate me and celebrate. They all wanted their pictures taken with me when it should really be the other way around. They were honoring me because of my successful summit and safe return, as an ordinary climber, I represented a shift to normalcy on the mountain. Everest was back in business after years of disasters. They were celebrating something bigger than me, but I was in the middle of all of it... and it was very special. 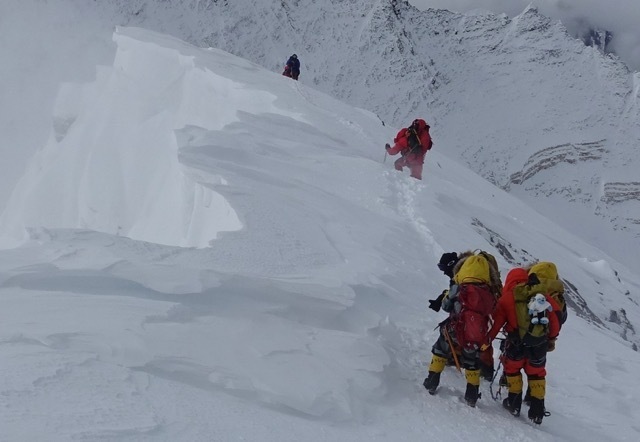 Ski Utah: What's the greatest lesson you've learned from the Nepali people?
Greg Paul: Wow, this culture is so happy, humble, gracious and strong. The Khumbu Valley is really Shangri-La. You can’t say enough about them...being around them makes you want to be a kinder, better person. It’s a privilege to climb with them as they're the most talented and natural alpinists on the globe.

Ski Utah: As a co-founder of Momentum Climbing Gyms in Utah, have you incorporated any Himalayan inspiration into your climbing routes?
Greg Paul: Not yet. I don’t think our climbers would appreciate replicating below zero temperatures. (Greg chuckles) One thing I'm really proud of is that we raised money and are providing ideas from our talented designers to help build a climbing wall at the Khumbu Climbing Center in the village of Phortse near Everest. The mission of the climbing center is to be a first-class instruction and training facility for Nepalese mountain workers so they can be better prepared for their work on the big mountains.

Ski Utah: What's next for you?
Greg Paul: A good winter in Utah where I can enjoy skiing without constantly thinking about training for an 8,000-meter peak. Also, my Sherpa climbing partner Nawang hopes to get a visa, come to Utah and stay with my family this winter. He will train at the Momentum climbing gyms, climb with local climbers, learn to ski, improve his English and hopefully develop his photography skills by working with some local talent. All of the above will hopefully enable Nawang to earn a better and safer living in Nepal than he would as an Everest guide. You may be asking yourself, what's the deal with that Yeti doll strapped to Greg's back? Greg hauled Eddie the Yeti with him throughout the entire expedition and to the top of Everest. Why carry this guy with him to the top? Just to have a piece of Utah's mountain culture with him at all times and as something to remind him of his 13 grandchildren knowing they will enjoy passing Eddie around over the years ahead.

Want to keep the conversation going with Greg or would you like to connect with him about a speaking gig? Feel free to email Greg directly at gregclimbing@gmail.com.