The Return of El Niño

Our good friends at Wasatch Snow Forecast look ahead to next winter and how El Niño will impact Utah's mountains:

There are few climate phenomena that are as well-known or as greatly hyped as El Niño.  Even if you’ve never read a meteorology textbook or skied a mountain in your life, chances are you are at least aware of the existence of something called El Niño, as well as its sister phenomenon La Niña, although you may not understand what they actually are.  Not to worry, Chris Farley’s got your back on this one:

Over the past several months, there has been increasing chatter in both lift lines and online ski forums of an impending El Niño event brewing for the 2014/15 winter season.  This is a direct result of NOAA’s Climate Prediction Center (CPC) releasing statements since the beginning of the year stating there appears to be signs of a developing El Niño event.  The CPC has even grown confident enough to issue an El Niño Watch for later this summer into the fall, when El Niño is likely to develop.
During closing weekend at Snowbird a few weeks ago, I rode the chairlift with a gentleman who enthusiastically told me, “El Niño has formed and it’s moving slowly across the Pacific Ocean toward Utah.” This experience, among others, has made me realize that despite the hype surrounding El Niño, there is still a lot of confusion regarding what it actually is, and furthermore, what it means for Utah. So let’s go ahead and clear up the confusion and tackle those exact questions…

What is El Niño?
El Niño is part of ENSO (El Niño Southern Oscillation), which is a large-scale climatological cycle that affects oceanic and atmospheric activity throughout the world.  In short, there is an area of the equatorial Eastern Pacific Ocean (roughly off the coast of Ecuador) known as the Niño 3.4 region.  ENSO is the cycle of cooler or warmer than average sea surface temperatures (SSTs) in this region of the Pacific.  The variation in SSTs compared to average is what defines El Niño (warmer than average) or La Niña (cooler than average).  To be considered an El Niño, the temperatures in the region must be 0.5°C or greater above average.  Strong El Niño events of the past have seen this temperature spike to more than 2°C above average.  While this might not seem significant, this area of relatively warm water can have a huge effect on how and where the jet stream carries storms into the United States during the fall, winter, and even spring months.

Where do we stand now?  Will El Niño develop?
Currently, temperatures in this critical Niño 3.4 region stand at approximately 0.5°C above normal.  So based on the definition above, El Niño right? Not quite.  In order for us to be in El Niño, we have to have 3 consecutive months of SST readings at or beyond that +0.5°C threshold.  June will likely go down as the first month to register an ONI (index name for +/- temperature) of greater than 0.5.  That means that if El Niño continues to strengthen as expected, we’ll like be in an official El Niño by late August or September.
If you look at the CPC’s forecast for El Niño probability chart, you can see they expect us to have >80% chance of being in El Niño by October: 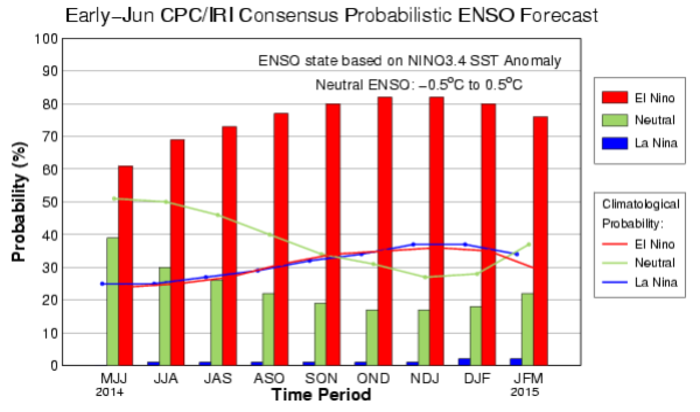 It seems to me that at least a weak El Niño event is inevitable based on trends we’ve seen over the past two months or so.  Now that we have established what El Niño is and the fact that it’s looking more likely, the question now becomes, “What does it mean for us in Utah?”

What does El Niño mean for Utah?
If you’ve lived in Utah for a while, and I mean a long while, perhaps you remember the Flood of ’83 when State Street was converted into a makeshift river to keep businesses downtown from flooding. 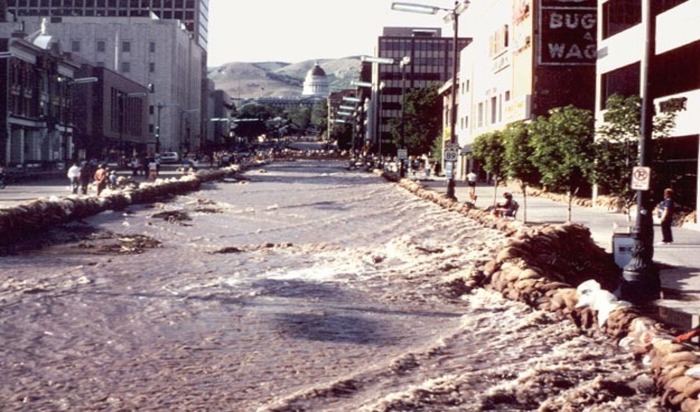 The catalyst for these historic floods was record warmth (90°F in the valleys) over Memorial Day weekend after a record winter snowy season which extended well into spring.  The cause for the record snowfall?  You guessed it, El Niño.  The 1982/83 season was one that has been remembered fondly in memories of Wasatch skiers ever since.  Depending on who you ask, the Upper Cottonwoods reported 800-900” of snow that year.  In fact, several sources have the winter of 82/83 as the most snow ever recorded in Utah.

1982/83 was a unique season throughout the country with extreme weather events ubiquitous across North America.  Record snowfalls were also observed in Tahoe and Southern California. It was El Niño’s coming out party, if you will — the first time national news outlets widely reported the phenomenon as the cause for all the extreme weather.  Because of this, many residents of Utah came to believe that this was typical of any El Niño event.  But 1982/83 was atypical as the ONI index not just passed the +0.5°C threshold, but reached as high as +2.5°C above average.  You can see strength of 1982/83 relative to other years here: 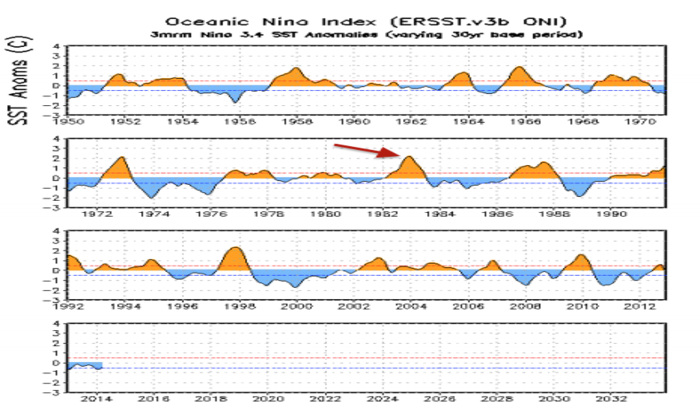 So how about the other, weaker El Niño episodes shown in the chart above (smaller orange humps)?  Where do they stand in pantheon of epic Utah winters?  That depends on your location.  The most pronounced effect of El Niño in the United States is a strengthened southern branch of the Jet Stream. Because of this, moderate strength El Niño events of the past have featured near normal snowfall for Northern Utah, while Southern Utah has experienced above average snow in most El Niño seasons.
This map shows the typical October – December precipitation amounts during El Niño:

As you can see, the farther south in the state of Utah you go during El Niño, the greater your chance for above average snowfall during October-December.  January-March period is more or less the same story with above average precipitation for Southern Utah and the southwestern United States:

Climate forecasting is far from an exact science and it is impossible to do more than speculate on how the winter of 2014-2015 will play out for us.  However, unlike the last three years which have been ENSO neutral, this season looks like we’ll have at least a moderate El Niño on our hands — something tangible to drive our winter season climatically speaking. Southern Utah should have a good chance at an above average winter while there is reason for cautious optimism in Northern Utah as well.  Personally, I’m hoping for a strong El Niño that will mimic that of 1982-83.  Is it too early to start snow dances?

How to Properly End a Ski Season