Bryce Canyon looks spectacular with its endless colorful pinnacles contrasted against a fresh blanket of snow.

Visiting Bryce Canyon in the winter is quite the experience full of green, red and orange colors mixed with snow.

Zion National Park in the Winter

Nothing makes a jaw drop as quickly as that first glimpse of Zion during the winter.

What a view from Brian Head's charlifts.

The stars in Southern Utah are out of this world.

Bryce Canyon looks spectacular with its endless colorful pinnacles contrasted against a fresh blanket of snow.

Visiting Bryce Canyon in the winter is quite the experience full of green, red and orange colors mixed with snow.

Zion National Park in the Winter

Nothing makes a jaw drop as quickly as that first glimpse of Zion during the winter.

What a view from Brian Head's charlifts.

The stars in Southern Utah are out of this world.

Well the good news is that this is 100 percent possible because Utah’s red rock resorts, Brian Head Resort and Eagle Point Ski Resort, have these beautiful areas right in their backyards. This year El Nino is coming in hot, and it tends to favor Utah mountains specifically the ones in the south. This means the red rock resorts are projected to get way more snowfall than usual. In other words, if you want to experience seriously snowy adventures, this is the year for ski and snowboard fanatics to visit these two resorts.

What makes visiting the Mighty Five during the winter season so special is that there are way less people, so you can snap photos and explore these spots without the summer crowds. The days may be shorter but that only brings the beautiful Utah sunsets earlier, and there will most likely be blankets of snow covering these world-class landscapes – what a sight to see.

So the question is: Where do want to ski and explore on this fun-filled ski trip?

Just a three hours drive from Las Vegas, Brian Head Resort has the highest base elevation of any resort in Utah, standing at 9,600 ft. It has become a Southern Utah favorite due to its family friendly activities (like tubing) and its cozy hospitality: The Grand Lodge at Brian Head.

The resort has a welcoming local vibe to it with fun rolling slopes to fly down and two terrains parks collectively named The Training Grounds, which have 20 plus features. The mountain is pretty tranquil, but that doesn't take away from its lively aprés deck and amazing BBQ joint that are must-do's after a long day of skiing.

When skiing at Eagle Point Ski Resort, it feels like you have the entire place to yourself. It’s closed on Mondays, Tuesdays and Wednesdays; so when it opens up for the long weekend it encompasses a backcountry ambiance where powderhounds have the opportunity to ride up its lifts and shred untouched snow stashes all over the mountain.

Eagle Point has a small resort feeling to it with an extremely peaceful main lodge and old school condos to rent. This makes it easy to kick back with a hot chocolate and a good book after an amazing pow day.

Eagle Point is scheduled to open this season on Saturday, December 19, 2015.

If paying a visit to Brain Head, Cedar Breaks National Monument is a must see because they are literally next door to each other. Utah locals consider this area a smaller version of Bryce Canyon, and it’s a great site to get some snowshoeing and cross-country skiing in. If you're limited in time, its the perfect place to get a taste of what the national parks close to these resorts have to offer.

Bryce Canyon looks spectacular with its endless colorful pinnacles contrasted against a fresh blanket of snow. To get to this breathtaking view, you have to wander through a pine forest and juniper stands making it an experience full of green, red and orange colors mixed with snow. For those seeking to turn this into a more active adventure, there are a number of nordic ski trails to explore in the area. Ruby's Lodge is also a great option to consider for anyone interested in making this longer than a day. Bryce Canyon is roughly 58 miles from Brain Head and 88 miles from Eagle Point.

A visit to Zion is like looking into a real-life postcard with its vast canyons, peaks, ridges and rivers. The east side of the park is perfect for photographers who want to get the perfect winter shot, because honestly – nothing makes a jaw drop as quickly as a glimpse of Zion during the winter. Zion is about 72 miles from Brian Head and 129 miles from Eagle Point.

For those seeking to get the full Southern Utah winter adventure, Brian Head and Eagle Point are only 65 miles a part from each other. It’s possible to visit both resorts along with the both national parks in one trip.

The three other Mighty Five national parks – Capitol Reef National Park, Canyon Lands National Park, and Arches National Park – aren’t much further east from Eagle Point and Brian Head. They are without a doubt worth the drive and could be something to consider if on a road trip or heading back to Salt Lake City to catch a flight. 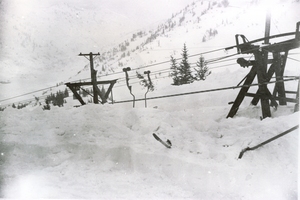