Dogs rule! When I asked seniors how they use their cell phones, I expected to be bored by photos of grandkids. Nope. Instead, they showed shepherds, labs, retrievers, pugs, mutts and a ferret.

Once past the doggie intro, I found that seniors are practical. They want information, not entertainment. Favorites links include weather, road and avalanche conditions. Ted summed it up: "Kids are 'screenagers.' They want their games and music, but I want to know if I can get to the mountain."

All of the ski tracking apps are mittens down favorites. So I pursued the love affair to discern what aspect of ski tracking seniors like best. While on the gondola at Deer Valley, two guys turned on that app. I had them cornered. "What feature of tracking do you like best? I asked. Vertical feet skied? Max speed?" I got nowhere. "The whole thing," they snapped in unison.

You can't hide from your ski tracking app. My friend Nick showed the red roly-poly line it recorded when he tumbled down the slope.

Maprika got rave reviews from a gaggle of New Englanders as they logged on to their phones at Snowbird. When everybody logs on, you can see where your ski buddies are all over the mountain. Hmmmm. Whatever happened to skiing together?

Seniors have other angles on cell phones.

Hard core skier Larry offers a warning with a play on words. "Before you buy a 'smart' phone, be sure it's a 'bright' phone. Take it outside. Be sure you can see the screen in sunlight. No phone is useful if you can't see what's on the screen."

Women's favorites are shopping deals and dining coupons. "I check for what's on sale at the stores I'll pass on my way home," said Lydia, a locker room buddy.

And Marie from New York has her own "phone booth" at the top of Brighton. She has a favorite big pine tree. She skis behind it to make a phone call or get a boarding pass. "I'm out of the weather and it's quiet," she said.

There's a down side to cell phones. Mountain hosts are being brushed off when they graciously offer to explain the mountain to visitors. "No thanks. I loaded the map on my phone," many say.

But there's a very positive side to all this. Alta has spotty cell phone service. Skiers actually talk to each other. Now isn't that novel!

Harriet Wallis has been a ski writer, editor and photographer forever. She learned to ski on a dare when she was in her mid 30s and has been blabbing about it ever since. Read more from Harriet at Ski & Snowboard News. 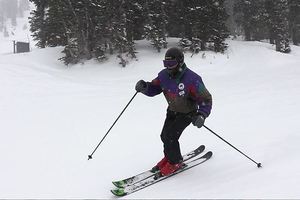 Library to the Lift: Powder Mountain