Après-Adam here with my Après report from early-December in the Wasatch.

If you know me personally, or are fortunate enough to follow me on Instagram, you probably knew that my birthday took place this past week. And while most people celebrate their birthdays for a few hours on the same day every year, I like to #GoBigGetBabes. That’s why I celebrate what I call “Birthday Week.” Since my I was born on the 8th of December, that means I start celebrating as soon as I tear the November 30th Quote of the Day off the bathroom calendar.

One of my favorite quotes from said calendar comes from Hester Browne:

Sometimes we all just need a reason to celebrate something. Which is exactly my motivation in celebrating my own birthdays ad nauseum. In reality, I'm not really even celebrating my own birthday. I mean, what's so great about being a 35-year-old-divorced-ski-bum, instead of a 34-year-old-divorced-ski-bum? Nothing. But I have some amazing friends who need an excuse to break away from everyday life, celebrate the skiing lifestyle in Utah, and just live a little. Birthday Week is that excuse.

Birthday Week 2016 kicked off when I woke up December 1st on a couch in Mexico, drank a poolside margarita, checked the Ski Utah snow report, and hopped on a plane back to Utah. I landed a little before midnight, and eight hours later, I was waiting in the Wildcat Lift line for Alta's Opening Day.

December 3rd: I joined in celebrating Conrad Nagel’s birthday back at Alta.

December 4th: The celebration continued with Sunday Funday with the Powder Posse at Park City Mountain.

December 6th: Tuesday was bluebird and Kevin Learned and I rode the Park City Terrain Parks.

December 7th: Opening Day at Sundance. It was cold enough that the Yeti was out. And he showed us how to shred!

December 8th: My actual Birthday! So naturally, Powderhound Matt and I celebrated by spending the day skiing powder in the backcountry.

December 10th: Saturday delivered an atmospheric river and another seven inches of snow to the Wasatch. Kevin Learned and I were at Alta and Snowbird to investigate.

December 11th: Sunday brought a 14” of snow to Park City. The Powder Posse was there to ski it all.

December 12th: Monday's bluebird skies allowed Solitude to open Honeycomb Canyon for the season. Naturally, Kevin Learned, Mike Mathews, and I were there to check it out.

It’s safe to say, “Birthday Week” is off to a pretty good start. Eleven consecutive days (and counting) of celebrating skiing with friends.

And it’s not over yet. Wasatch Snow Forecast is expecting another atmospheric river this weekend. I don’t know if my legs, or my liver, can take it. But I’ll be out there. And why wouldn’t I?

We're not even halfway through "Birthday Month" yet. 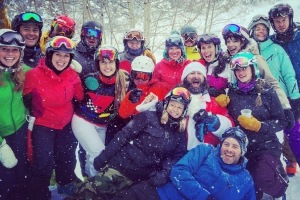 How to Simplify A Ski Vacation

25 inches in 24 hours at Snowbasin was BOTTOMLESS!