“What can you tell me about skiing Brian Head Ski Resort?” my husband Jamie queried.

I chuckled at his optimism. “I can’t remember the ending to movies I’ve repeatedly watched...and you expect me to remember a resort I skied once...20 years ago?!”

Turns out, I underestimated the impact this Southern Utah resort tucked away in Dixie National Forest had on me. It all came flooding back as I stood on the summit marveling at Cedar Breaks National Monument’s 3-mile-wide stratified limestone cliffs in crimson, beige and orange, its hoodoos, arches and fins dusted in winter white. With 360 annual inches of fluffy, light snow, this resort redefines “desert” red rock country.

Brian Head boasts the highest base elevation in Utah.

After a cozy night in the Best Western Premier Brian Head Hotel and Spa, my husband and kids, Hadley and Bode, met our guide, Public Relations Coordinator Mark Wilder. He has has a 40-year history with Brian Head and lives and breathes the mountain--in fact, he has helped build many of its facilities over the years.  If you somehow can’t catch your own glimpse of this mountain’s charm, look through his lens.

Covering over 650 acres and 1,370 vertical feet, the resort has two connected mountains, Giant Steps and Navajo, offering 71 runs, 8 chair lifts, and 3 surface lifts. Navajo Mountain has gentle slopes for beginners and intermediates while Giant Steps Mountain caters to intermediate and advanced terrain with moderate bump runs, roller-coaster cruisers and a moderate terrain park. There is limited extreme terrain but If you don’t mind a short hike to the summit of Brian Head Peak, you’ll find some great vertical bombing down a number of expert chutes.

And nothing can beat the price tag: an adult weekday pass is $45; on regular-season weekends, it’s only $62.

Brian Head boasts the highest base elevation in Utah--9,600 feet--and that translated to a cold day during our visit. Mark started our adventures on the Navajo Express (Chair 4) that whisked us to the top of Navajo Peak. Oldtimers know the chairlifts by numbers, but all are named, with many of the lifts and runs being a nod to the area’s Native American history (i.e. Navajo, Dineh, Ute and Apache Pitch) and its Vegas demographic (The Strip, Roulette and Double Aught).

We linked to Wildflower (Chair 1), skiing down a few intermediate groomers with two inches of untracked snow, crossed the ski bridge that connects the two mountains, rode up Alpenglow (Chair 8) and warmed up with a hot chocolate break in Giant Steps Lodge. 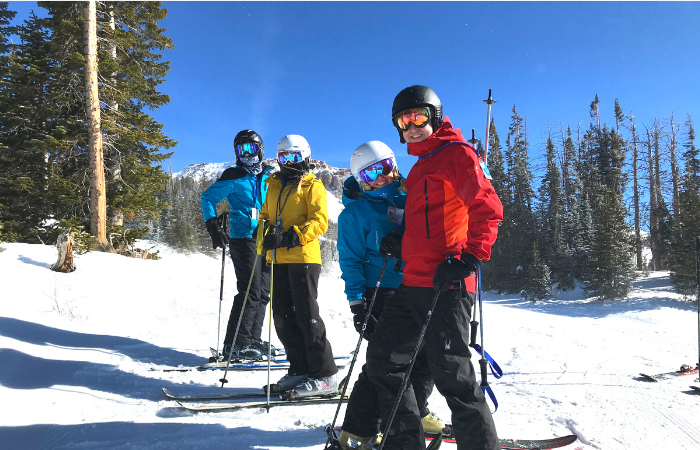 Afternoon was a whole different experience exploring Giant Steps Mountain. The Arctic temps lifted and we were able to stay on the summit long enough to enjoy the views. A new layer of white intensified the North Rim of the Grand Canyon to the south, to the west we could see Wheeler Peak in Great Basin National Park, NV and just north, the white-capped 12,000-foot peaks of the Tushar Mountains.

A pine beetle infestation thinned many of the trees on the marked runs, which gave us all-mountain access with a whole lot of routes. Our favorite area was off Roulette (Chair 5), and we loved bobbing and weaving down the fall line of Straight Up’s bumps. Every run was a race to sundown as we discovered protected powder stashes and soaked up every last minute.

That night as we indulged on Black ‘n Blue Burgers and Pickle Spears at Last Chair Saloon in Giant Steps Lodge, a wave of nostalgia washed over me. Brian Head was reminiscent of my childhood skiing in Canada, and though I appreciate the high-speed conveniences of today’s modern resorts, they suddenly just felt so...corporate. What Brian Head may lack in bells, whistles and size, it makes up for it with affordable prices, minimal crowds, staff that feels like family and awesome terrain.

If you’re more of a purist, sled down the moderate slopes of the newly-minted Bristlecone Park in the heart of Brian Head. 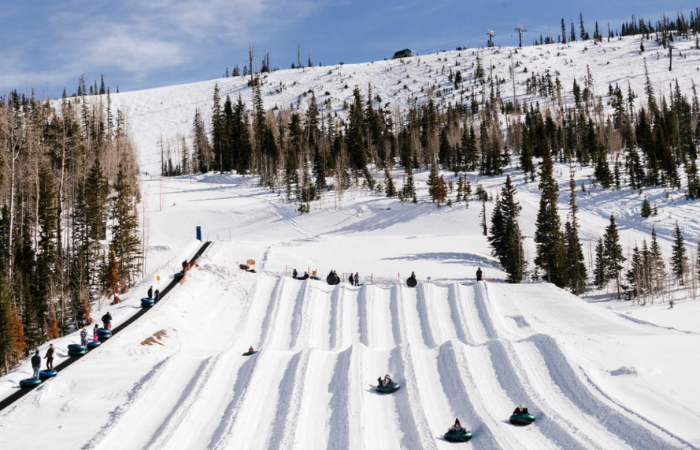 We figured the steeper Giant Steps Tubing Hill would pack more punch for our teens and lo, were we correct. For a bit of background on 15-year-old Hadley: she once slipped off a 25-foot-tall blowup “iceberg” in Jordanelle Reservoir and busted her shoulder. If there is a chance of trouble in the most obscure places, she will find it.

The tubing hill was no different despite the fact that Brian Head goes above-and-beyond to ensure a safe and fun experience. After our safety briefing, we were transported up the magic carpet. At the top of the run, we carefully selected our lanes and the race was on.

It was on her final run when Hadley forever became a legend in the annals of Brian Head Tubing History.

As we launched off the top, I focused only on my survival down the steep, thrilling slope, and very intentionally dragged my toes near the end to safely slow myself down before the cushioned barrier.

Laughter echoed as our run came to an end until I realized not all of us had finished. I looked over to Hadley who was sheepishly dragging her sled across the lanes, looking dazed.

“I fell off my tube. I hit a bump and face-planted,” she confessed.

“How? Weren’t you holding on to the handles?”

“Wait. You’re supposed to hold on?”

We let her recover for a while but encouraged her to get back on the horse...errr...tube to take a few more runs.

It was on her final run when Hadley forever became a legend in the annals of Brian Head Tubing History. Once again, we were lined up at the top ready to race with another family. Hadley got a strong start and must have been fueled by the need for speed because she forgot one key element (no, not holding on; we already covered that one). The one about dragging your feet to slow down at the end. Our fellow racer, Tuan Phan, caught her shining moment on video before she plowed into the padded barrier at the bottom. Face-first. Again.

Stunned by the cushy impact...and then doubled over in laughter, she limped over to the sidelines. While the rest of us stood in awed silence, a Brian Head staffer deadpanned the best response, “Wow, way to finish strong.”

There’s no business like snow(mobile) business and Thunder Mountain Motorsports delivers quite the punch. Not all outfitters are created equally and I have been on excursions with an uninspired train of 20 snowmobiles. From the get-go, Thunder Mountain was different, maxing out at just six riders per group and offering 1.5-hour, 3-hour or all-day tours.

We had the best guide in the business. Sixty-two-year-old Ted Cooke has a deep history and appreciation for Dixie National Forest and guides summer backcountry tours in the Tushar Mountains, likely with the same enthusiasm with which he snowmobiles: like a trick rider on a horse. 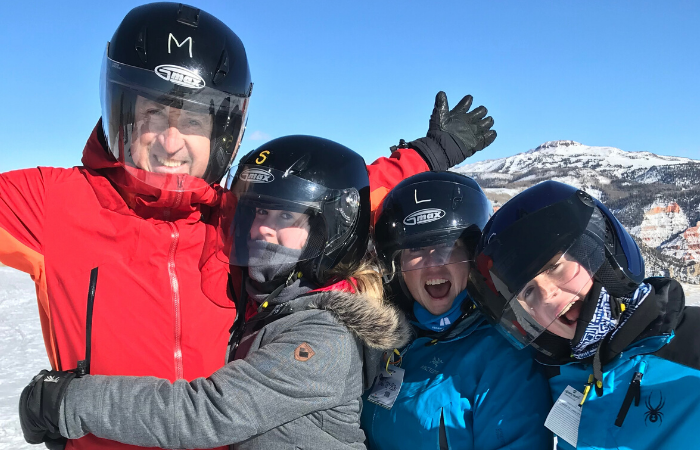 After getting outfitted with helmets and a safety debriefing on our Ski-Doo Grand Touring 900 LE, we set out along the freshly groomed trail to explore the forest’s whirl of white. As we wound past snow-dusted trees and frozen rivers, we would occasionally stop to gawk. Bear Canyon. Summit Canyon. Cedar Canyon. Parowan Canyon. We played in an expansive meadow, a scene that could have been lifted from a classical landscape painting.  Bode was thrilled to switch places and drive with Ted for the first time, leaving snowy billows behind his snowmobile in powdery contrails.

We paused in the “Haunted Forest.” Brimming with emotion, Ted spoke of the 2017 Brian Head Fire. “Aspen trees are the largest living organisms on earth and 70,000 acres were burned in that fire.” He went on to explain how aspens have the unique ability to produce genetically identical offspring through offshoots from their root system. “The forest service didn’t have to replant these seeds. In the first year following the fire, the aspen trees were already 3-4 feet tall. The elk and deer are thriving here. Everything in nature replenishes itself.” 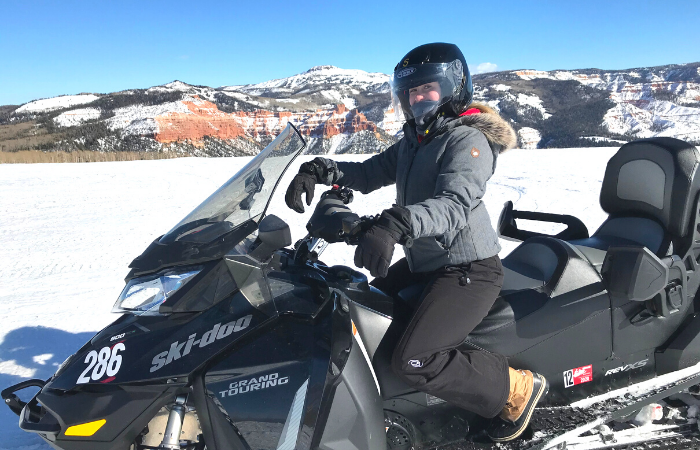 The climax of our tour was at Tink’s Racetrack overlooking Cedar Breaks National Monument where settlers would bring their horses for endurance training. Snow was etched in every crevice and joint, showcasing the amphitheater’s deep textures. Snow, ice, and air glistened and it was awe-inspiring to catch this rare glimpse of winter splendor.

If you want remote, wild and untouched red rock backcountry, welcome to paradise.

One morning, Bode and I swung by the iconic Georg’s Ski Shop, renowned for the hottest winter and summer sports gear...and for serving up the best tips of the area. Owners Georg and Stephanie Hartlmaier were Brian Head’s first full-time residents in 1965 and Georg, a world-class skier and coach from Germany and Austria, was the resort’s first Mountain Manager. The shop is still family-run today.

Bode and I rented classic Nordic skis for some backcountry explorations with Brian Head Ski Patrol Brandon Reiner. If you’re looking for a groomed classic Nordic track, you’ve come to the wrong place. If you want remote, wild and untouched red rock backcountry, welcome to paradise.

We followed Highway 143 a few miles to the junction with Highway 148 and parked at that Panguitch Lake turnoff. We glided along the rim of Cedar Breaks National Monument as wind crashed into the plateau that rises over 10,000 feet above sea level. 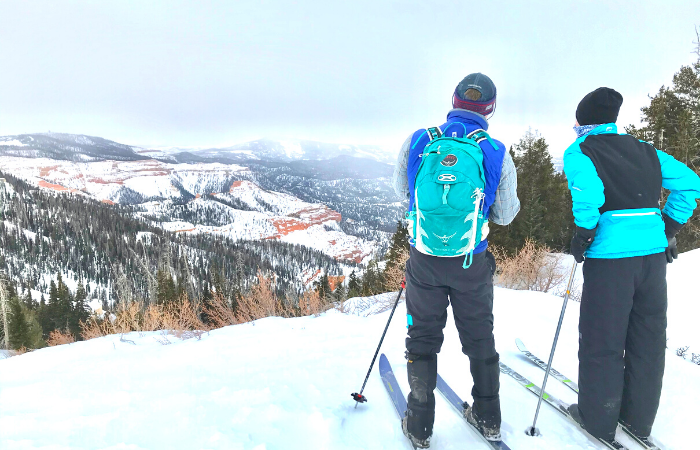 Brandon offered us reprieve from the elements by ducking into the 2-mile Alpine Pond Trail loop, a popular hotspot in the summer. We trekked through the deep powder-sugared snow that wound through subalpine meadows and spruce-fir forest. We broke our own trail, frequently stopping for stunning vistas of the fabled amphitheater, a sea of snow clusters drowning the red tentacle-shaped hoodoos. The spring-fed frozen pond was barely noticeable in the grove of gnarled-weather-beaten Engelmann spruce, subalpine fir, and quaking aspen.

As we climbed back, snowflakes whirled around us, the final 15 minutes a cold, beautiful slog. When we finally reached the car, I triumphantly felt I had run a marathon. Or at least a half.

The dude needs a lesson from fishermen on how to inflate numbers but at least our family adventures in Brian Head gave us innumerable memories to last a lifetime. 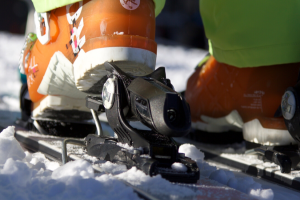 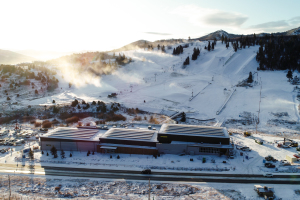 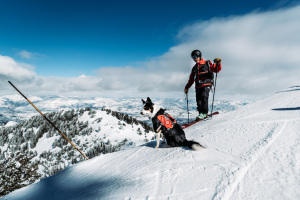 Q&A With an Avalanche Dog Handler 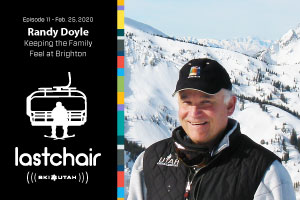