Falling. It goes against our instincts and most of the time we avoid it at all cost. Then there is psicobloc. Also called deep water soloing, psicobloc is a style of rock climbing that skips the ropes and harnesses in favor of a freefall into water.

In 2013, Chris Sharma partnered with sponsors to bring a psicobloc climbing competition to Park City, Utah. The inaugural Psicobloc Masters Series was a resounding success, thrilling spectators and competitors alike. The stage for the event was a 50’ wall with a 25’ overhang. One wrong move and the climber fell into a pool below. Simply breathtaking, as in, I held my breath for much of the climbs. It was that exciting.

The Psicobloc Masters Series returned this year, offering up more breathtaking moments. Even knowing the climbers are safe falling into the pool, you can’t help but gasp the first time you see someone fall from such heights.

My favorite moment was when 14-year-old Kai Lightner pushed to complete the climb in spite of his competitor, Jimmy Webb, having already reached the top. Webb, along with the entire crowd, cheered him on as he refused to quit. It’s how we persevere in the face of defeat that determines our eventual success; I’m convinced this young man is destined for great things.

I appreciated the strength and skill of the climbers even more when I looked through the photos I shot of the competition. Seeing their moves frozen in time had me uttering, “Whoa!” over and over. Above are some of my favorite shots of the finals event held August 8th, 2014.

To see the results and some great video clips, visit the Psicocomp RESULTS page. 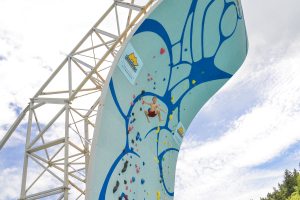 Wasatch Wildflowers are in Bloom!

Paddling through the Dog Days of Summer