I've enjoyed skiing Park City Mountain Resort this past season. If there was one thing I'd change it would be to improve the uphill capacity from the base. They must have been reading my mind.

On Wednesday they announced $10.5 million in improvements for the 2008-09 winter season including a new high-speed chairlift, terrain enhancements and renovation of the Mid-Mountain Lodge.

The new high-speed quad chair lift, Crescent lift, will replace and realign the existing Ski Team fixed-grip double chairlift. Unlike the existing lift, which begins several hundred yards uphill from the main base area along the Homerun trail, the new lift will begin near the base of the ski resort and extend to Crescent Ridge, also known as Ski Team Ridge. The new lift will lessen the load on the PayDay high-speed six-pack lift during peak times, and provide increased access to the ski area's front-side runs, which are some of the resort’s best advanced ski terrain. The new lift takes guests almost twice as far as the existing Ski Team lift and in less time. In addition, the new lift will provide access to a majority of the resort and direct access to lifts including Silverlode, Bonanza, King Con, PayDay, Town, Pioneer and McConkey’s.

I'm already looking forward to the first day of riding the Crescent lift next season! 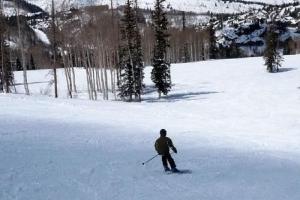 The Winter that Keeps on Giving

Don't Hang up the Boards Yet