The History of Brighton Resort

Unique Character:  As Utah’s oldest resort, the history and character of Brighton Resort is apparent the moment you arrive. Brighton is one of the few resorts that has high-speed access to all points in the resort and tons of night skiing acreage. Brighton is often the first resort in Utah to start spinning lifts each season. 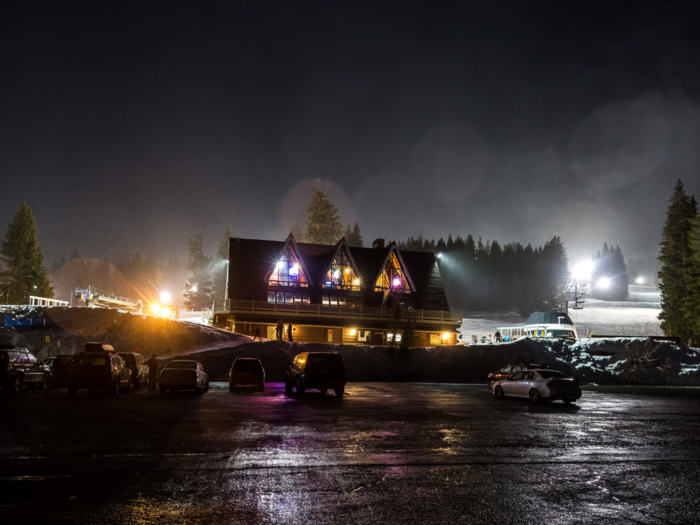 What’s in a Name: Brighton
Brighton Resort is named after a Scottish immigrant named William Stuart Brighton. He brought his young family overseas in the 1850s and they made the grueling journey west as Mormon pioneers to seek their fortunes in Utah. Brighton obtained 80 acres at the top of Big Cottonwood Canyon and he and his children and wife Catherine spent the summer in a small tent before constructing a one-room cabin the following summer near Silver Lake.

The family conducted a bustling business catering to the miners who traveled between Park City and Alta, many of whom loved Catherine’s home cooking.   In 1874, the family opened the Brighton Hotel with seven small bedrooms to accommodate their many visitors and eager Salt Lakers looking to escape the summer heat. The Brighton Hotel was renowned for its savory meals, fishing, bonfires, a lively dancehall and the beautiful scenery and wildflowers. By 1895 the Brightons had opened a store in the old one-room cabin, a post office and a second three-story wooden hotel. It is for the legacy of this intrepid and welcoming family that Brighton Resort is named. Member of the Wasatch Mountain Club going over the pass separating Park City and Brighton, circa mid 1920s
- Thanks to the J. Willard Marriott Library, University of Utah Ski Archives Special Collection

Founding
Long before Brighton came to be, it was a frequent overnight stop for miners traveling between Park City and Little Cottonwood Canyon. Hardy souls would navigate the rugged terrain on rudimentary skis as they searched for silver. You can learn more about the silver mining heyday in our Alta and Park City history accounts.

True to the resort's approachable atmosphere and humble ethos, few realize that in 1936, Brighton earned the distinction of becoming Utah’s first ski area. Back in 1936 there were only 15 ski areas across the United States and none in Utah. It was no easy task for early enthusiasts to find their way up Big Cottonwood Canyon during its deep, harsh winters. Avalanches roared down the steep granite canyon, often making the roads impassable. After big storms, it could take several days to clear the road!

As winter arrived in Big Cottonwood Canyon in the last months of 1936, a primitive T-bar juddered to life thanks to a length of ½-inch wire rope, an old elevator drum and the determined efforts of the Alpine Ski Club (which later became the Wasatch Mountain Club). In its early years, Brighton was composed of several private ski companies and clubs who owned and operated a variety of unreliable T-bars and surface tows to transport skiers up the slopes of land publicly owned by the U.S. Forest Service. The Alpine Ski Club then erected a T-bar in 1938 to compete with the “newfangled” infrastructure installed by Alta in 1937. (For Alta Ski Area's history, click here).

At the time, each club or ski company required a ticket or membership for riders to use their lifts. It would be some time (and a backbreaking amount of work) before the unification of all the lift infrastructure came together under one ticket. In 1943 during WWII, Zane Doyle, a butcher at the Hill Air Force Base, purchased a T-Bar from Jesse Kimball “K” Smith, a locally renowned ski instructor. When he switched the disused lift on, wooden towers collapsed, requiring extensive repairs! As the war dragged on, Doyle cleverly made a deal with the Army, providing GI’s a ski ticket for $1 per day in exchange for plowing the notorious canyon road. By increasing the accessibility of Brighton in the winter, Doyle played a role in popularizing the sport among Salt Lake's denizens. After the war, in 1947 K Smith installed a chairlift on the flanks of the iconic Mount Millicent for a private company called Brighton Recreation. This state-of-the-art single chairlift was constructed of American Steel and identical to the lift installed at Sun Valley Resort in Idaho. It was far more efficient than the slow and cumbersome T-bars. This was a huge milestone for skiing in Utah and the dedication ceremony actually attracted a crowd of 2,000-3,000 Salt Lakers who enjoyed free lift rides on opening day. In 1955, to keep up with the competition on Mount Millicent, Zane Doyle purchased the first two-person chairlift in the Intermountain West and installed it himself. Boring 9-foot-deep holes into the solid granite with a single jack and a sledgehammer for the lift footings took Doyle all summer and resulted in a 50-pound weight loss! It was a smashing success and shortly after, a second double chair, The Mary Chair, was added where today’s Crest Express now stands. 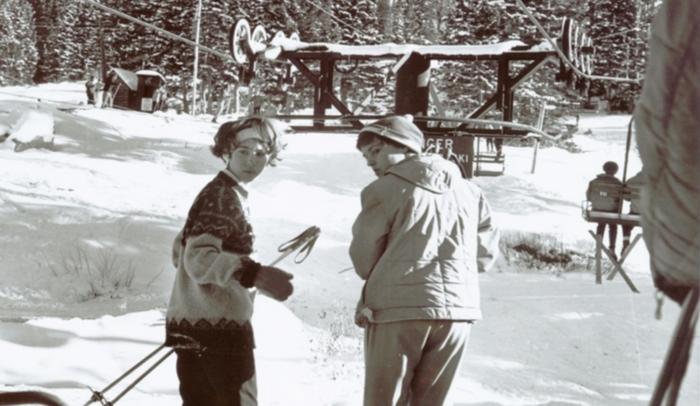 In 1963, in partnership with his father-in-law, Doyle purchased Brighton Recreation and its Mount Millicent Lift. By consolidating the hodgepodge of lift companies, equipment and the base area, Doyle became the father of Brighton as we know it today. Skiers could finally enjoy the area with a single lift ticket.

As equipment technology and the winter access to the resort continued to improve, skiing gained great popularity in the late 60s. Salt Lakers loved traveling up to the mountains to ski and socialize and readily adopted the glamorous skiing lifestyle. Families flocked to the resort and Brighton readily catered to the enthusiastic visitors who were keen to learn or perfect the art of skiing. 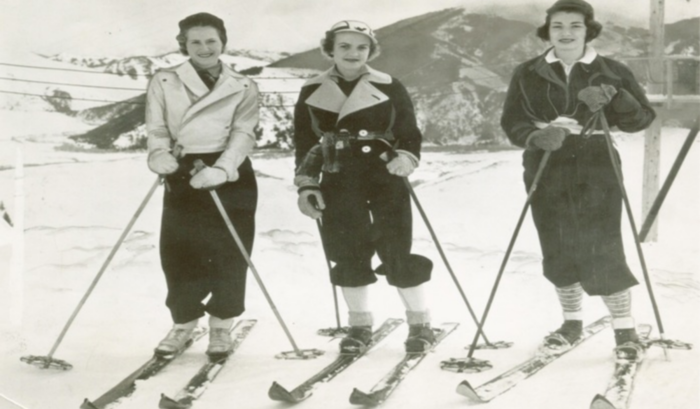 After a few sleepy decades, Boyne USA purchased Brighton and began to invest in infrastructure updates and additions in the 1986-87 season. One of the first high-speed quads chairlifts to grace Utah’s fabled slopes was erected here, at Brighton in 1991, following Solitude's installation of Eagle Express in 1989. (For Solitude Resort's history, click here). Boyne quickly added two more high-speed quads, a triple chair, and expanded night skiing terrain, snowmaking and completed base lodge improvements. Boyne brought Brighton to the next level—increasing amenities, acreage and access for guests. 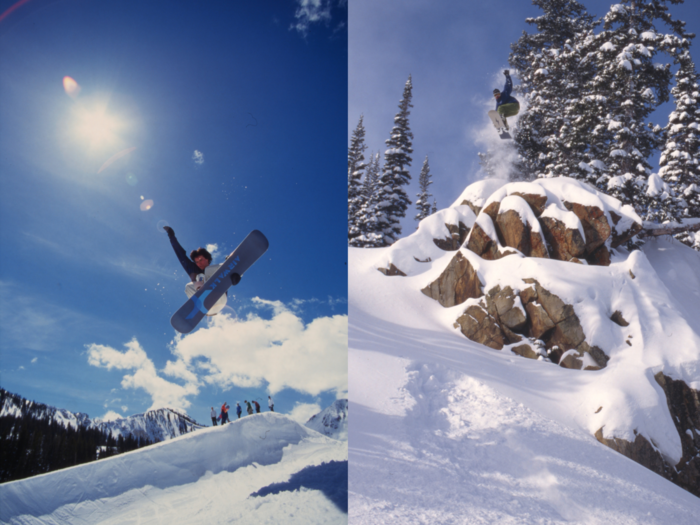 Brighton was one of the first resorts to allow snowboarding alongside Powder Mountain and Alta. At first, the management wasn’t quite so sure what this new snowboarding craze was all about. Snowboarders were permitted to ride at Brighton once concerns surfaced around the dangers of boarders hiking in the backcountry in avalanche terrain. Says Jared Winkler, a longtime Brighton employee who grew up at the resort, “Brighton really embraced snowboarding and supported it. At Brighton, everyone’s invited.”

“The topography here is crazy...Brighton has the highest concentration of jumps and cliffs and pillows.” - JP Walker, Pro Snowboarder

For the 1994–95 season, Brighton was connected to its western neighbor, Solitude Mountain Resort via the SolBright connector trail.

In 2007, Brighton was purchased by CNL Lifestyle Properties, though it continued to be leased and managed by Boyne USA with the Doyle family in leadership and management roles. In 2018, Boyne USA went back to CNL and purchased Brighton.

Thanks to the Doyle family and the legacy of generations of Salt Lakers flocking to Brighton’s slopes, the resort harbors a rich culture rooted in history and community. Since day one, Brighton served as a retreat for people to disconnect, enjoy the beautiful scenery and revel in nature. As one of the first resorts to offer free skiing for children, there are thousands of youngsters who took their first turns at this beloved resort. Having catered to local skiers since the very beginning, the spirit of skiing and snowboarding at Brighton is truly something special to experience. The broader winter sports community is only just discovering the wonderful atmosphere of Brighton Resort, which generations of Utah skiers and snowboarders have worshipped for decades.

Looking to the future, Brighton is making plans to improve the beginner terrain for new skiers and snowboarders which will also enhance access to the Snake Creek Express chairlift. Famous for its Snow Sports School, Brighton has always welcomed newbies to the slopes. Improvements for the future aim to keep generations of families returning to Brighton, like they always have. Gorrell, M. (2018, March 14) After running Brighton Ski Area for years, Boyne will own it again. The Salt Lake Tribune. Retrieved from: https://www.sltrib.com/news/business/2018/03/14/after-running-brighton-ski-area-for-years-boyne-will...

Winkler J. (personal communication/interview, October 16, 2020) discussed the history of Brighton and the evolution of the resort. 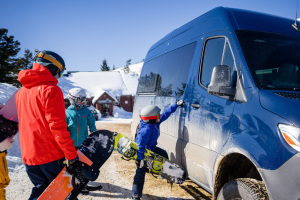 RV'ing and Skiing Through Utah's 15 Resorts