If you follow the weather, you may have heard some new buzz words lately. Pineapple Express and Atmospheric River are two that have recently been thrown around regarding the most recent storm cycle that has overtaken the West.

The Pineapple express is simply the term used to describe a Jet Stream of moisture that originates around the Hawaiian Islands and slams right into the West Coast.  An Atmospheric River in it’s simplest form is just a ton of moisture from the tropics that gets caught up in that Jet Stream and is then transported to places that don’t necessarily see those quantities of water in their storms.  Anyway, what the heck does all this mean?  Well simply put it means we receive copious amounts of snow and a ton of water weight in that snow.  In Utah we are normally recipients of the light, dry fluffy stuff. This storm and the next one coming on Thursday are anything but normal.  They are heavy wet dense storms, the stuff folks in California and Washington are used to. Heck I’ll take it, if it’s white and it’s falling from the sky, then I can promise you, you’ll never hear me complain.

Here is a look at the Snowfall totals that Wasatch Snowforecast put together from our most recent event.

“Final snowfall totals?  I just went through both resort reports and snotel data from the last four days.  Final totals look like this:”

Enjoy the video I put together from Snowbasin, on Friday, Park City on Saturday, Canyons Sunday and Solitude Monday. You’ll get to see the storm from all over the Wasatch!

It's only getting better! 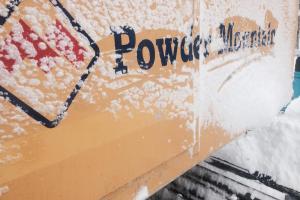 A promise delivered at Powder Mountain