All photos generously provided by the Utah Department of Transportation.

The stark sound of heavy artillery reverberating off the mountains often accompanies bigger storms here in Utah. For the uninitiated, the sound of warfare on the mountain delivers quite a shock in the dark hours of the early morning. For a seasoned local, the rumbling cannonade serves as a welcome alarm clock, signifying future face shots.

In a sense, avalanche mitigation within and around Utah's ski areas is a never-ending battle between humans and Mother Nature’s snowy bounty. Avalanche forecasting and mitigation is an essential service provided by numerous snow safety professionals to ensure roadways and ski runs are safe for travelers, skiers, and snowboarders.

The birthplace of avalanche forecasting and mitigation in North America actually began in the craggy and narrow confines of Little Cottonwood Canyon at Alta Ski Area. Thanks to the dangerous combination of steeps and deeps that visitors to Utah so adore, the town of Alta itself was destroyed multiple times by historic avalanches. Lives were lost and catastrophic damage to structures was a regular occurrence. From the beginning, Alta’s denizens—miners and skiers alike—were highly motivated to better understand snow and avalanche mechanics to prevent the loss of life and town.

More than half of Highway 210 in Little Cottonwood Canyon is composed of avalanche runout zones and over 75% of the town of Alta also lies in avalanche paths. 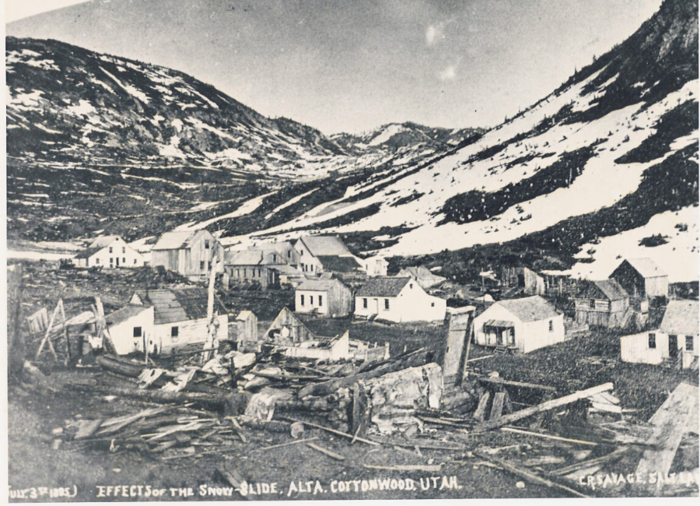 In 1939, when Alta Ski Area was born, the United States Forest Service (USFS) hired Douglass Wadsworth as the first Forest Service ‘Snow Ranger’. The Snow Ranger Program of the USFS was devoted to the study of avalanche science, tasking Wadsworth with minimizing the lurking avalanche hazards. Wadsworth was initially charged with developing basic safety protocol for travelers and skiers in Little Cottonwood. He often closed Highway 210 for 1-4 days following a storm. This allowed time for the newly loaded snowpack to settle and natural avalanche cycles to run their course. Frothing skiers were often forced to wait days after a storm until the road was deemed safe for travel and or cleared of avalanche debris. 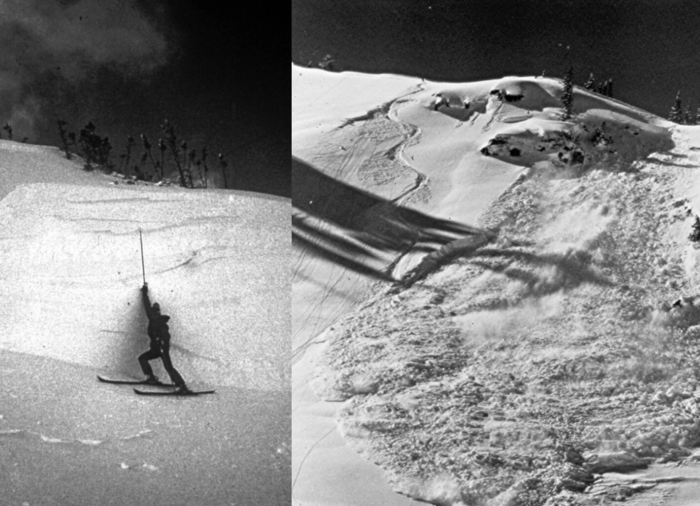 In February of 1939, Wadsworth and the Ski School Director, Karl Fahrner, are credited with the first attempt to use explosives in North America to trigger an avalanche on Mount Superior. This iconic peak looms above the highway to the north of Alta and harbors numerous and notorious avalanche start zones. They detonated their charge and were surprised by the lack of results.

The following day, the two returned with a bigger bomb and it is believed they remotely triggered a colossal slide measuring 3.5 miles in width. This deadly avalanche thundered down Superior Gulch, covering over 2,000 feet of the highway under 14 feet of snow. The slide destroyed the band of trees Wadsworth and Fahrner had used for shelter the day before! The two were lucky to have sought shelter from a greater distance with the detonation of their larger bomb. Needless to say, there was still much to learn... 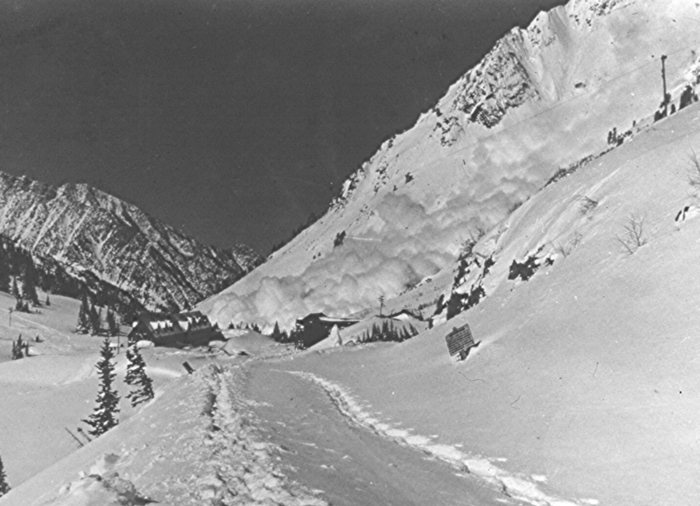 In 1940, Sverre Engen was hired on as a Snow Ranger and continued to hone the technique of using explosives to trigger avalanches. Engen began to ski cut slopes, starting smaller slides on less consequential slopes. He also began digging snow pits to study different layers within the snowpack. By gathering observations and data from the layers, Sverre began to understand the conditions that correlated with avalanche activity. In 1941 the first Alta Ski Patrol was formed.

In 1946, a bold skier named Monty Atwater succeeded Sverre Engen as Snow Ranger after being discharged from the 10th Mountain Division in World War II due to injury. (Can you guess where Alta’s avalanche dog, Monty, got his name?) A few years later, Atwater began to use small hand charges to protect the skiing public. By triggering avalanches after each storm, Atwater hoped to prevent the larger and more catastrophic avalanches that tended to crash to the floor of Little Cottonwood Canyon. He experimented by drilling holes into overhanging snow along ridgelines, placing explosives in the depressions and detonating them electronically. In 1949 the USFS developed the first Avalanche Center at Alta, thanks to the availability of detailed records about snowfall and avalanche activity. 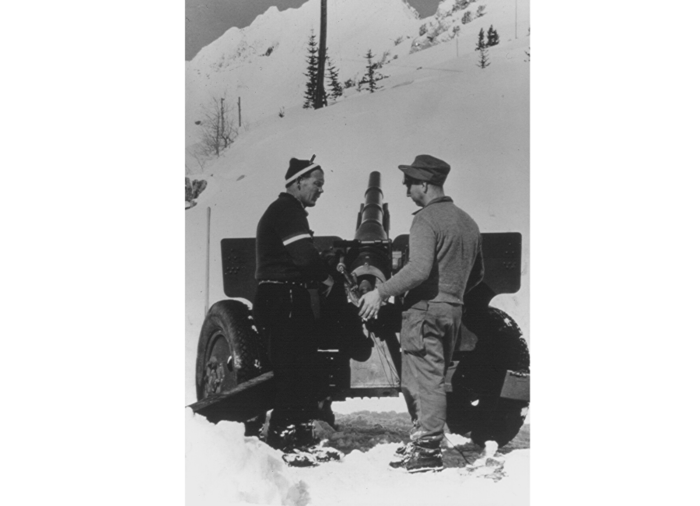 That same year, Atwater began running Howitzer tests with the Utah National Guard. Having witnessed avalanches triggered by military artillery in Europe during WWII, Atwater knew this technology was an effective way to generate avalanches from afar. Atwater would direct the Guardsmen to sight the proper start zone and they would fire the gun.

Eventually, in 1952, Atwater finally gained permission from the National Guard to operate the gun. There had been instances when the Guardsmen, stationed in Salt Lake City, were unable to reach Alta to operate the gun during storm cycles accompanied by road closures. Several times in this scenario Atwater had actually fired the weapon without authorization. It took several years and some clever bargaining, but permission for the Snow Rangers to legally fire the weapons was eventually granted by the National Guard, the Governor of Utah, and the USFS.

These pictures from the Utah Department of Transportation clearly depict the humbling and destructive force of the avalanche problem. 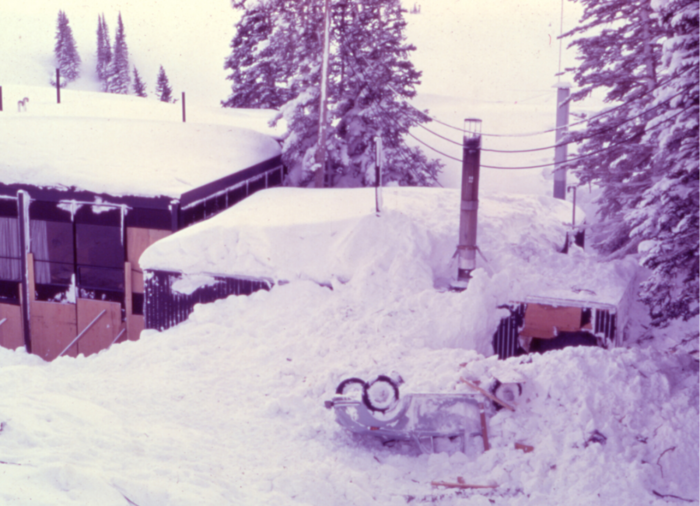 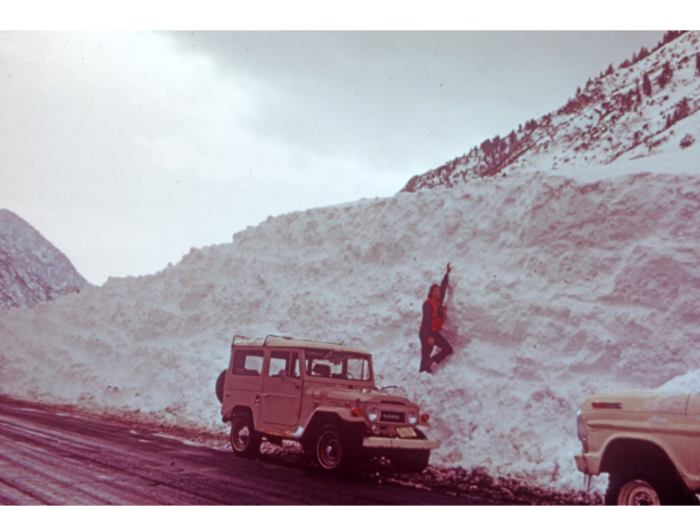 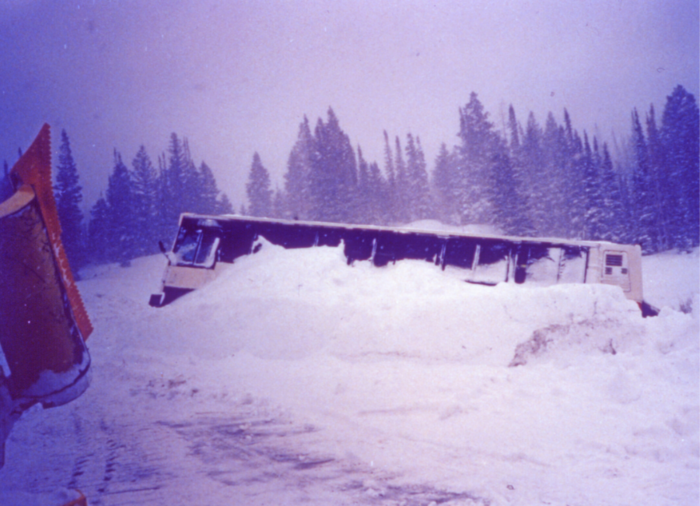 Atwater and other Snow Rangers continued to perfect protocols for using hand-delivered explosives to augment the use of military artillery. Since only a finite surplus of the military ordinance would be available, there would come a point in time where it was no longer feasible to use artillery, and other methods would be required.

In the late 1950s, pondering alternatives, Monty Atwater and a fellow inventor developed the Avalauncher. This device resembles an oversized potato gun and employs pressurized nitrogen to launch a projectile with approximately one kilogram of explosives several hundred meters away. Though Avalaunchers lack the accuracy or force of military-grade artillery, they are still in use today. Their advantage lies in that they are effective and require fewer men to operate than the Howitzers with the added benefit of far less governmental oversight and red tape. Avalaunchers are a civilian tool that can deliver a smaller explosion at a shorter range to mitigate avalanche risk. 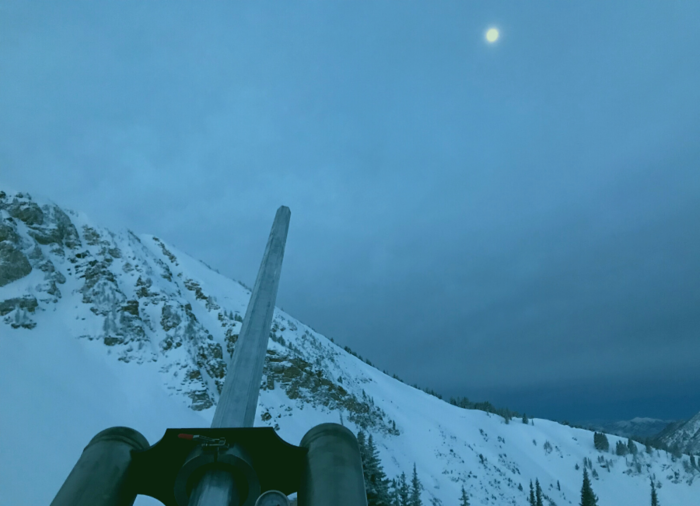 Alta’s newest Snow Ranger in the mid-60’s, Bengt (Binx) Sandahl, was keen on the idea that Snow Rangers should work alongside Alta Ski Patrol to better understand and manage avalanche risk at the resort and along the highway. Binx spent years developing routes for ski patrollers to deliver hand charge explosives at Alta to further reduce the area’s reliance on military artillery. He installed the first remote weather station atop Cardiff Peak, largely financed by his own pockets.

In 1972 the USFS formally determined that it would no longer be responsible for avalanche mitigation within private ski areas; they wanted out of the avalanche business. The first privately employed avalanche forecaster in Little Cottonwood Canyon was David Harmre. He developed the modern terrain atlas and avalanche mitigation plan still in use at Alta today.   Throughout the 70s and 80s, artillery use was eliminated from some locations and added to others in Little Cottonwood with the opening of Snowbird. The responsibility of keeping the highways and ski areas safe was handed off by the USFS to ski patrols and the Utah Department of Transportation (UDOT).

Broadly speaking, technology has been evolving to eliminate or replace artillery in avalanche mitigation globally.

Says Dave Richards, Director of Alta's Avalanche Department, “Alta seeks to eliminate military artillery in the near future, possibly as soon as 2026, replacing it with alternative methods of avalanche mitigation.”

UDOT continues to work in tandem with ski resorts, patrols, and the avalanche forecasters at the Utah Avalanche Center to perform forecasting, avalanche mitigation, and rescue across Utah. (Click Here to find our recent interview with the Utah Avalanche Center's newest forecaster, Nikki Champion.) In the interest of eliminating artillery, ski area operations, ski patrols across Utah, and UDOT employ a variety of other technologies you might observe when skiing or snowboarding.

Gazex
You may have spied Gazex exploder systems across the state. These are installed in known avalanche paths that frequently slide. You can easily spot one to the looker’s left at the top of the Milly Express lift at Brighton.

The portion you can see is a twelve-foot-long tube that pipes into an underground oxygen and propane storage system. This pressurized gas is mixed and then triggered by remote control. The resulting shock wave travels through the tube and collides with the snow surface beneath. By frequently deploying the Gazex shock waves in known avalanche paths after every storm, bigger and more dangerous slides are avoided.

Wyssen Towers
Backcountry skiers and splitboarders may have observed the Swiss-made Wyssen Tower installed on Cardiff Pass, north of Alta. These tall metal towers contain an explosive magazine equipped with charges similar to those thrown by hand. Through a secure remote control, a blast from the Wyssen Tower can be deployed to trigger avalanches. The force of the explosion is what instigates failure within a weak layer of the snowpack and any resulting avalanches in the vicinity of the Wyssen Tower.

This technology is less intrusive than Gazex systems and the Wyssen Tower can be reloaded with explosives by helicopter. UDOT installed a number of Wyssen Towers on the ridgeline north of Alta in the summer of 2020 to assist with mitigation above the town and Highway 210. 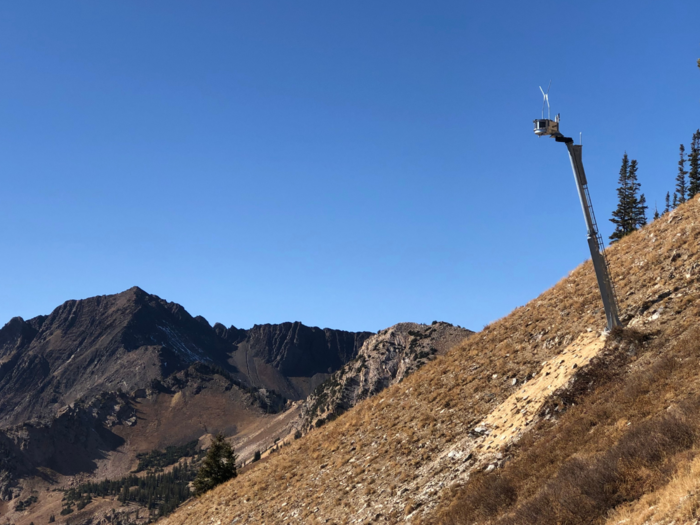 O’bellx
You may have seen O’bellx modules scattered around the east-facing side of Mount Baldy at Alta, another remote avalanche mitigation system used by Utah resorts. These egg-shaped cones, often mistaken for alien pods, offer an innovative solution to avoid humans handling explosives. The modules safely store oxygen and hydrogen at low cost, which can also be remotely deployed.

Snow Fences
Though not cutting edge technology, good old fashioned snow fences act as an anchor in the snow, helping to reduce avalanche activity. You may have seen them installed in Austria, Switzerland, or Japan. In areas that do not benefit from frequent skier compaction (which helps to improve snow stability), snow fences can be installed in inaccessible start zones. Expect to see new snow fences popping up around Park City. Alta will soon be installing snow fences in the East Castle area.

Next time you see a ski patroller or mountain operations specialist, pause for a moment to give them a high five. Many of Utah’s resorts would not function without the knowledge and expertise of these individuals. As always, please respect and obey all ski area boundary signs and closures, as it takes a lot to keep our snowy slopes safe for skiers and snowboarders who relish the joy that recreating in avalanche terrain provides. 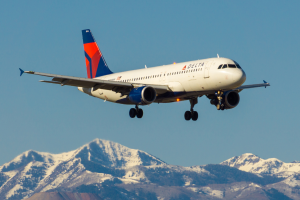 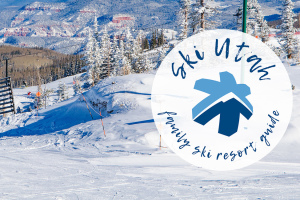 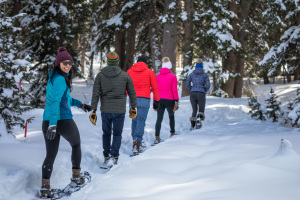 The 5 Best Snowshoeing Trails in Utah 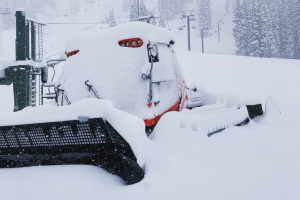 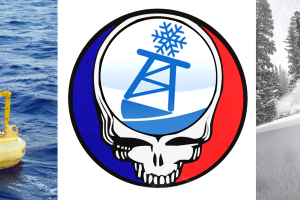