5 Après-ski Places to Get a Drink in Utah

After carving up the slopes in Utah, sometimes skiers and snowboarders need a break, some revelry and—let’s face it—a beer.

The Expedia Viewfinder team is all about finding adventure spots at mountain resorts, but also places to celebrate post-slope accomplishments. We turned to our friends at Ski Utah to highlight some of the best watering holes in Utah where skiers and boarders can cheers to a good day on the trails, while still sporting their ski and snowboarding boots.

A hot spot in Park City since the late 1870s, High West sports the label “saloon” for a reason: It’s a central meeting location and a rustic place to fill up on delicious grub and fancy spirits. Straight from the slopes, skiers and boarders can ski in and warm up with the distillery’s creative cocktails. High West specializes in hand-crafted spirits and Rocky Mountain whiskeys. The One Sunset concoction is a favorite at this joint, as it artfully blends amber lager with vodka, grapes, mint leaves, and lemon for a distinctive flavor that’s man enough for the hardcore whiskey connoisseur.

Although it offers hot coffee and scrumptious breakfast items, the Corner Store is perhaps better known for its full bar, local craft beers from the Squatters and Wasatch breweries, and the aprés-ski crowd. Since the 1970s, the Corner Store, located in the Plaza at Park City Mountain Resort, has become a familiar party place for locals and visitors alike. After a day of shredding up the slopes, guests decked out in their ski boots can lounge by the heat lamps on the outdoor patio and pair a juicy burger with a frosty brew.

Located in an A-frame house at the base of Brighton Resort’s 10,500-foot mountain, Molly Green’s is open to skiers, boarders, and those who are simply craving a cold one. They all flock to this full-service bar and grill for heaping plates of nachos and something strong. Ski in to this sit-down restaurant and warm up around the cabin’s fireplace. If it’s been a successful day on Brighton’s slopes, raise a celebratory toast as you take in the magnificent view of the mountain.

Nestled in the upper level of Snow Park Lodge at the Deer Valley Resort in Park City, Edgar’s Beer and Spirits Lounge is the place to knock back a few and brag about the day’s runs. Forget about changing out of all that snow gear, just finish that last run and head straight to the bar for some Goose on the Loose or an Edgartini that’ll warm the heart and soul. Turn up the heat with some mulled wine or indulge with some hot buttered rum. Edgar’s also serves up tasty treats like curry-spiced cashews and turkey chili nachos for those with the post-slope munchies.

Wasatch Brewery, Utah’s first brewery, is more than just beer and bar food. It has upscale appeal and a variety of food and beverage options. From its surprisingly non-spicy jalapeno beer to its decadent chocolate stout, Wasatch’s craft beers pack a lot of flavor into those pint glasses. Many of the menu favorites even blend brews into their recipes, bringing about unique flavor that appeases the heightened senses of a hungry skier. The brew pubs in Salt Lake and Park City are open late into the night, inviting guests in for post-skiing merrymaking. Plus, Wasatch Brewery just opened up a brand spanking-new location in Salt Lake's Sugarhouse neighborhood.

People travel to Utah for the unrivaled trails, fresh powder, and after-skiing drinks around the fireplace. Hit the Utah slopes all day, and then warm up with a cold one at these local taverns.

Utah Resorts Open with a POW!! 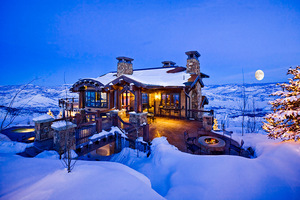