Art All Around at The New SLC

If you’ve ever peered out the airplane window as your flight makes its final approach into Salt Lake City, then you know. There, framing downtown Salt Lake City’s distinctive urban core, is the majestic Wasatch Mountain Range, home to some of the world’s most renowned ski and snowboard resorts, located just minutes from where your plane is about to touch down. And so it is fitting that, when the Salt Lake Department of Airports began concepting a new airport terminal, it looked to those nearby mountains—as well as the state’s red rock canyon country—for inspiration. The end result is called The New SLC, which opened on September 15 and October 27, 2020 (Phase II will open in 2024), a state-of-the-art, amenity-heavy airport terminal where passengers are greeted by original art honoring Utah’s renowned natural beauty at every turn.

For most airline passengers, the first stop following deplaning is most often the restrooms. Recognizing this opportunity to make a first impression, Salt Lake airport planners partnered with the Salt Lake Arts Council and the Salt Lake City Mayor’s Office to create the Whimsy Walls Project, unique vinyl wall wraps created from original artwork adorning the walls of each of The New SLC’s 24 restrooms. Each restroom features a different piece of art, but all reflect the culture, community, landscape and spirit of Salt Lake City.

Untitled, a Whimsy Wall Project piece by Ogden-based artist Levi Jackson, was inspired by aerial photos of four-wheeler tracks across the desert. “The thing that made me most excited about this project was that I trusted that the quality they were looking for would be higher than what you would normally see in an airport,” Jackson says. “It’s more specific to the place and the people here. As soon as you get off the plane, it sets the tone for what Utah is about.” (For more information about each Whimsy Walls Project artists, scan the QR codes located outside of each restroom with your smartphone.) 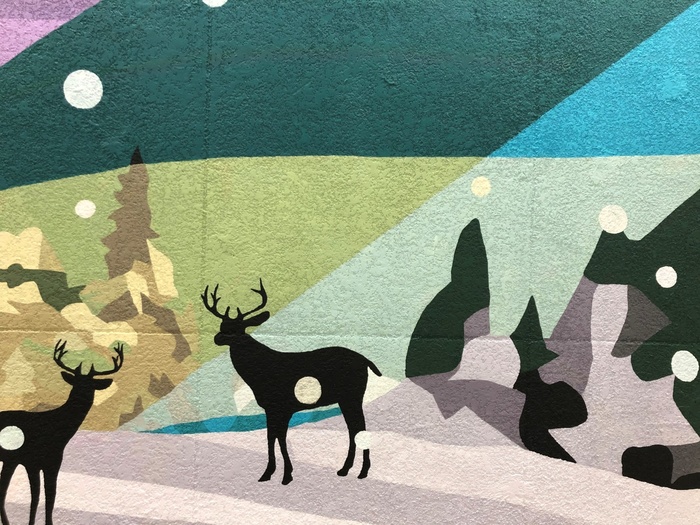 The New SLC’s two linear concourses (A and B) are connected by a mid-concourse tunnel. Again, instead of relegating the quick trip through the tunnel as strictly utilitarian, terminal planners used it as an opportunity to provide passengers with another Utah-specific art experience. There, muralists Tracy O’Very Covey, a Utah native, and the Austin, Texas-based artist, DAAS, painted a series of four concurrent murals titled Autumn, Summer, A Winter Snowscape and In Bloom. “As a native Utahn who enjoys traveling the varied regions of our state, I perceive these seasons emotionally then filter those feelings through my imagination to create art that is a stylized interpretation of what I see and experience,” says O’Very Covey, who concepted and painted the mid-concourse tunnel’s Fall and Summer murals.

Then, as you walk through Concourse A to retrieve your bags and exit the airport, you’ll arrive at the heart of The New SLC, a voluminous space flanked by 50-feet-tall, floor-to-ceiling glass windows framing sweeping views of the Wasatch Mountains called the Plaza. There, you’ll also be treated to what is arguably one of the most impressive airport art installations in the world: Gordon Huether’s The Canyon. 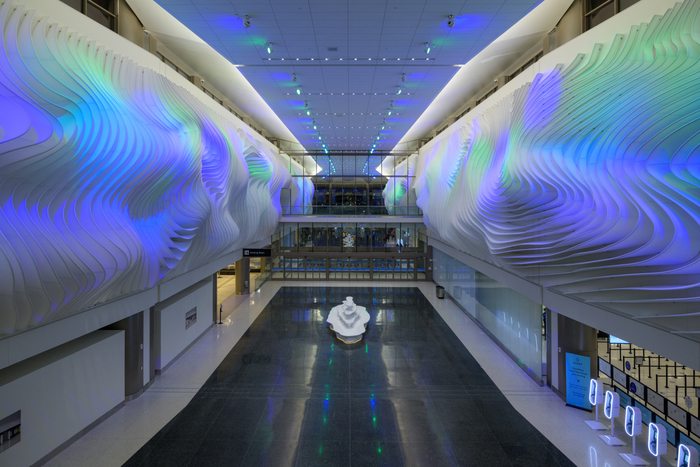 Occupying the space high above the Plaza’s shops and restaurants for the length of a football field, The Canyon art installation is an awe-inspiring experience on the scale of traveling through an actual canyon. This piece, which was concepted from the beginning of the terminal’s architectural design phase, is made up of more than 500 fabric-covered fins in varying sizes and flowing shapes, which change color and simulate movement thanks to a programmable lighting system. “The fins are meant to mimic the textural elements resulting from how water and wind erode stone away over millennia,” Huether said. Lights on the ceiling are reminiscent of how the sun penetrates a slot canyon from above. The Canyon’s wavy patterns are repeated below in four 18-feet high by 17-feet wide Column Plates, which serve as architecturally integrated seating areas throughout the Plaza. 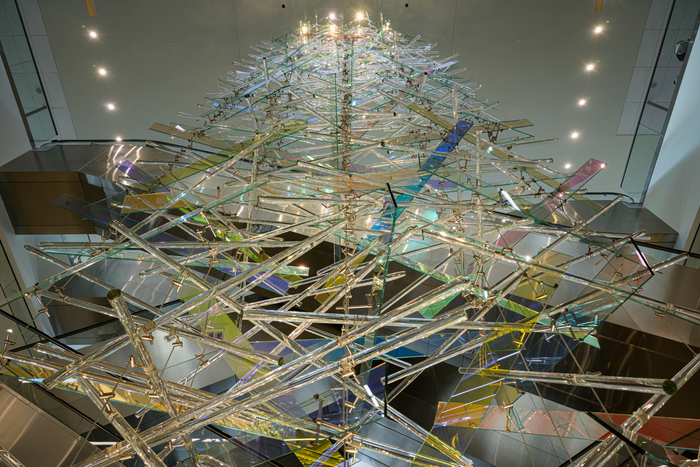 As you make your way out of the terminal and into baggage claim you’ll see the lower portion of yet another grand art installation, The Falls. This dichroic and hand-pulled-glass sculpture, also created by Huether, cascades the length of a three-level escalator well. “Since slot canyons are formed by water, created a prismatic installation inspired by the movement of water just made sense to me,” Huether said. 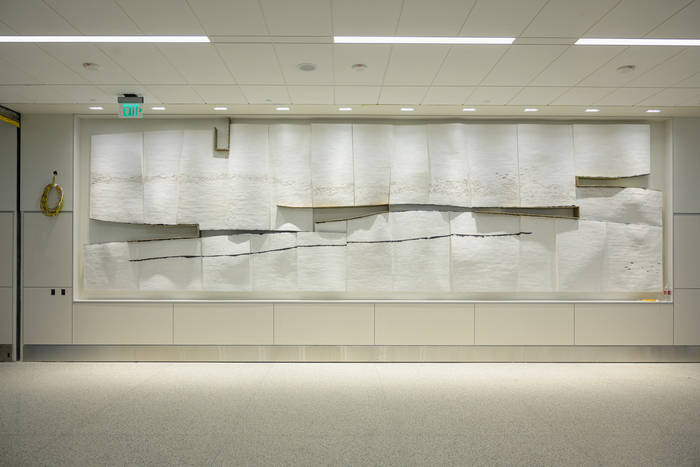 The Whimsy Walls, the mid-concourse tunnel mural and Huether’s attention-demanding installations aside are really just the beginning of the art on display within The New SLC. On a wall facing the TSA security checkpoint area is Near Distance—an eight-feet by 30-feet piece representing our “shared horizon” made of salt, charcoal, plaster and copper by the Salt Lake City-based art team of Soonju Kwon, Reihaneh Noori and Hannah Vaugh. Jenkyn Powell’s 1970s-era stained glass art installation, You Are Here, was dissembled and retrieved from the airport’s old terminal, and then redesigned and reinstalled in The New SLC by Huether’s artist team. The World Map, a tile installation that resided in the old terminal from when it was built in 1961, was photographed, reproduced and now hangs within The New SLC’s Greeting Room.

For those who live in and love Utah, the Salt Lake City International Airport terminal’s artistic homage to the state’s beauty is an appropriate tribute to this amazing place. And for visitors, it should be considered an invitation to explore all inimitable experiences Utah has to offer.

This post is sponsored by Salt Lake City International Airport. 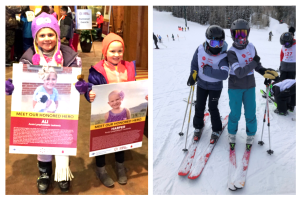 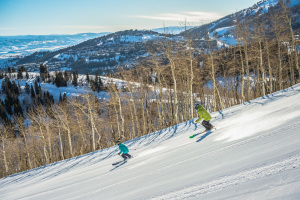 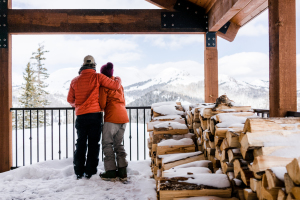 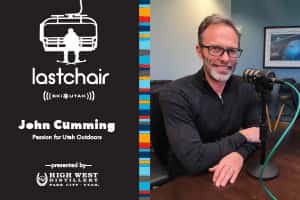