First Major Snow In the Wasatch

Nice Morning For A Drive

First Turn of the Season

First Three of the Season

Nice Day For A Hike

The Moment We Realized We Could Ski That

First Major Snow In the Wasatch

Nice Morning For A Drive

First Turn of the Season

First Three of the Season

Nice Day For A Hike

The Moment We Realized We Could Ski That

Après Adam here with step 4 of my 12-Step Program for après-Ski Conditioning. I’m here to help you have the best après-ski season of your life!

I'm an Eagle Scout. And while it's been a good 15 years since I earned my last merit badge (no, après-skiing wasn’t one of them) and I've forgotten every knot I ever learned, I will never forget the Scout Motto: Be Prepared.

It's why I always carry tele straps, extra snacks, a Leatherman tool and a couple beers in my avalanche pack. It's why I always bring an extra dozen bagels and cream cheese to the hill each morning to share with friends. It's why I usually keep an extra pair of skis, poles and a Shotzski in roof box on my car.

And it's why, when a freak September Storm dropped between 6-12" of snow on the Wasatch this past weekend, I was more than ready to get in my first two après-ski days of the season!


The storm rolled in last Thursday night, causing accidents on the roads, some flooding, a tornado in Ogden, and, worst of all, the cancelling the Teton Gravity Research premiere in Salt Lake City. But by midnight, the heavy rains had turned to snow in the higher elevations. I went to bed watching the snowfall figures start to build in the upper Cottonwoods. A few hours of sleep and a two cups of coffee from Park City Bread and Bagel later, I was on my way to the top of Guardsman Pass to check out the fresh snow covering the fall colors. 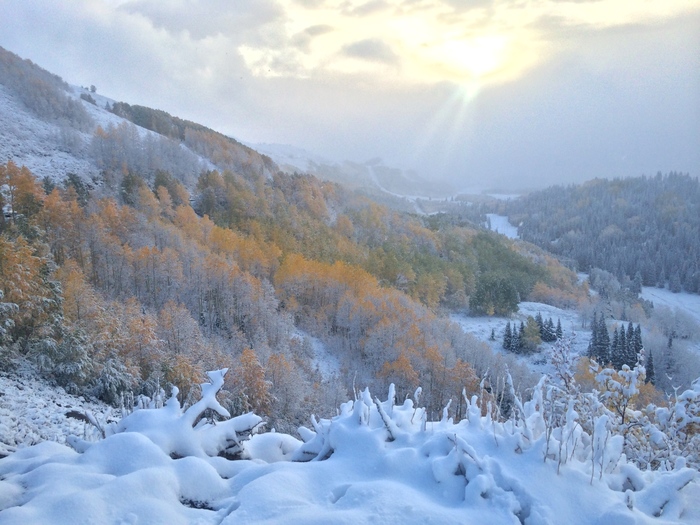 While leaf peeping, I made sure to keep an eye out for spots where, with a few more inches of snow, I could maybe sneak in my first-ever September turns, the only month I'd never previously après-skied.
I hate to admit it, but I wasn’t the first one to ski or après-ski in Utah this season. While driving around Big Cottonwood Canyon, I saw a few guys with gear, headed up to “ski” some bushes. Back at work, I saw some friends had posted photos of turns in the Uintas, then celebrating with a very fitting PBR.

I was envious of those turns and that beer and I knew what had to be done. A couple of hours later my buddy Kyle and I were back at the top of Guardsman Pass with ski gear, a couple of beers and a GoPro. This was the result: 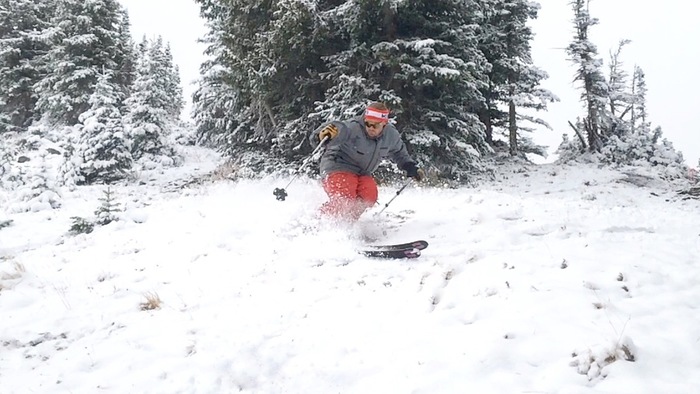 I’ll be the first confess that I’ve been known to ham it up a time or two for a good Instagram, but the photo I posted this time wasn’t at all indicative of the actual “skiing” that took place that day. I started to feel a little guilty as we enjoyed our first-après-ski session of the season at No Name Saloon. I woke up feeling worse and decided to put together a video showing the reality of our glorified “ski day,” while maybe poking fun at everyone else out there that were posting the same Epic-first-day-of-the-season!” We obviously had a blast at Park City Mountain.

While piecing together the banger edit From yesterday’s epic September shred sesh, I made sure to keep an eye on the growing snowfall totals in Little Cottonwood Canyon. After seeing some videos of people making real turns that morning, I wrangled together a posse and we set off to Alta to see if we couldn’t atone for our first “ski day.”

We arrived at Alta and were pleasantly surprised to find snow and cars in the parking lot. Other people had the same idea we did. A little ways up the hill, a crew was sessioning a little booter as a couple people picked their way through the rocks on Corkscrew. It looked thin, but we were going to be able to ski.

We geared up and started skinning, admiring the fall foliage powdered with September snow. Along the way, we stopped to watch some local skiers and photographer, Rocko Menzyk, capture some of the first backflips of the season on a little booter. Kevin asked to hit the jump and threw his first 360 of the season. A pretty good sign that the day and the season were off to a good start. 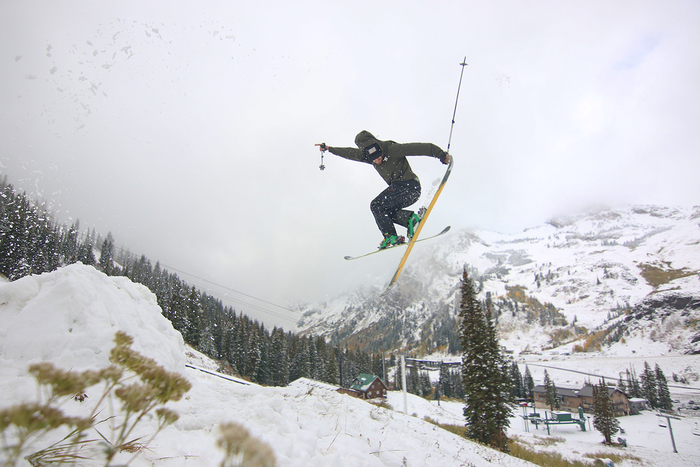 We didn’t have any idea what we were going to ski, so we just kept skinning and surveying the options. We past up some great looking lines and made a note to find them on the way down. As we neared the top of Collins Lift, the fog cleared and we couldn’t help but stop and stare at Main Chute and what looked like ski tracks coming out of the bottom. It looked marginally rideable. Hmmm. 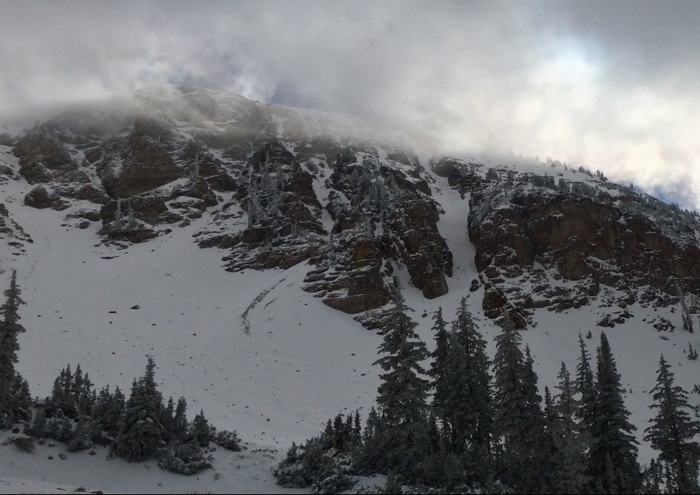 For the sake of full disclosure, I have to admit that skiing Main Chute on September 24th wasn’t a last second idea as we were skinning. A week before the storm hit, when Powderhound Matt sent out a group text about the possibility of a winter storm hitting the Wasatch, I mentally ran through the options for preseason turns. Seeing as how my 2015-2016 season ended with a run down Main Chute on June 20th, I was naturally drawn to the idea of starting my season on the same line just three months later. I called up my buddy Joe Johnson, who had skied it last preseason with similar coverage, for some intel. This is my best recap of the conversation:

“Honestly I forgot we did that. I think it was so bad I blocked it out of my memory. The entrance is sharky. The middle fills in and skis pretty well. The bottom is a minefield of boulders. As long as you’re ok with survival skiing the top and walking out of there, it could be done. You’re not serious, are you?”

I wasn’t 100% serious. Just making sure I followed my one take-away from ten years of Boy Scouts: Be Prepared.

Standing in Collins Gulch and looking up at Main Chute, our group deliberated for a few minutes. Kyle had dinner plans with his girlfriend, and made a respectable, yet heckled, decision to bail. Kevin, who was also had dinner plans with his parents, knew his dad would be more upset if he didn’t try to ski it. Zach was hesitant, but confident, and said he could go either way. I knew that he opportunity to ski an iconic line (#GoBigGetBabes) in September was too good to pass up. I made the call to go for it, or at least, “see how we feel when we get up there.” Which really means, “I don’t want to jinx it, but we’re going for it.”

The hike from EBT to Baldy was a little dicey. With no visibility and without a bootpack up the ridgeline. We had to negotiate some icy rocks as we blindly made our way up the ridge. We then post-holed our way up towards the top of Mount Baldy, stoked that the snow was deeper than expected, but also exhausted from the three hours of hiking and skinning behind us. 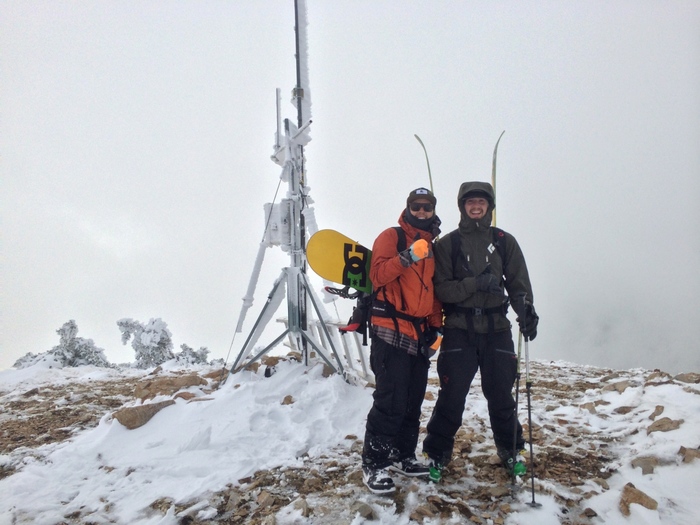 We found the top of Main Chute around 6pm. While it would have been nice to wait for better visibility, we were running out of time. We took a couple cliché looking-down-Main Chute pics and dropped in. 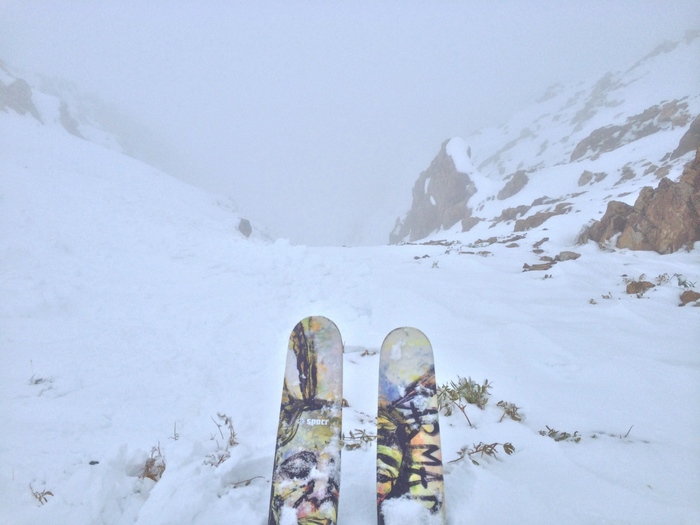 The skiing was exactly how Joe had described it. Survival skiing to get into the chute. Better than expected powder turns through the middle. Super thin coverage at the exit, which dropped us into an un-skiable minefield. Standing at the bottom of Main Chute, we didn’t care about the core shots behind us or awaiting us on the way down. We were elated to have accomplished our goal of experiencing September powder turns in Main Chute.

We traversed as far as we could out of the Ballroom, then skied towards the lines we had passed on the way up. Feeling invincible, we dodged rocks and hopped over bushes, managing to find some great snow on the way down. It got thin as we approached the base, but we found some lines that connected, even stopping to hit the little booter on the way to the car. 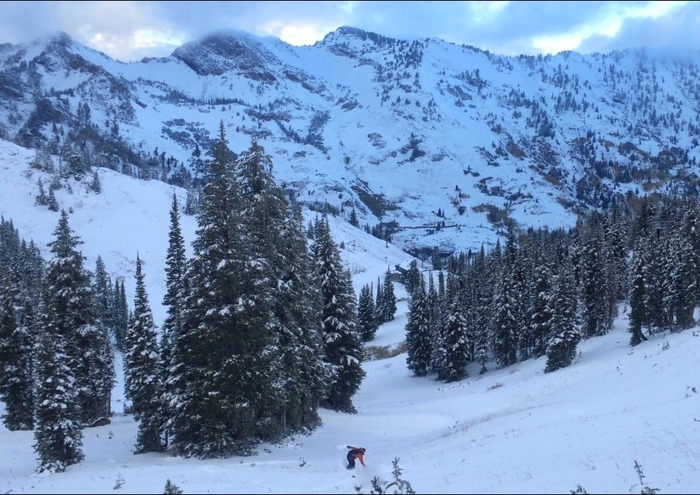 We high-fived, took a celebratory shot ski (Be Prepared) and shared a couple beers as we recounted our ski day and watched the September sunset over the Salt Lake Valley.

It was the perfect après-ski day to kick off the new season. You never know when your first après-ski day might be, so remember Step 4: Be Prepared.
Video Photo Snow + Weather 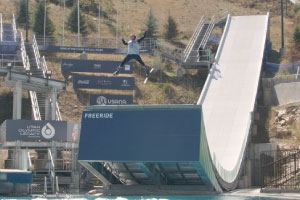 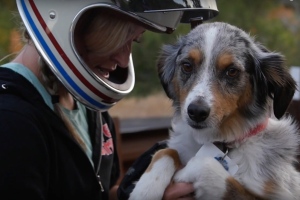