After the Party Is the After-Party: Deer Valley World Cup and Yeti Bash

If you missed out on the party that was Sundance 2017, don’t worry. Because the unofficial Sundance after-parties are set to kick off this weekend—and that’s where the real fun begins!

The Deer Valley FIS Freestyle World Cup takes place this week in Park City. This is the weekend the locals have been waiting for all season. The festivities start Wednesday night with opening ceremonies on Main Street, Park City. There will be a free concert by The Revivalists, followed by fireworks. This is typically a really fun night as the locals come out from Sundance hibernation to take back their town - if only for one night.

World Cup Weekend continues at Deer Valley Resort on Thursday with Men’s and Ladies’ Moguls qualifiers, and finals under the lights of Deer Valley.


Aerialists get their turn Friday afternoon and night, followed by fireworks and a fundraiser at Fuego benefiting The Speedy Foundation.

Saturday night is one of the best nights of the season as most of Park City shows up to watch the Men’s and Ladies’ Dual Moguls under lights at Deer Valley. Mogul skiers ripping bumps and sending huge airs side-by-side as a riled-up crowd cheers from below. Music will be blasting, flags will be waving, fans in costumes will be dancing, and lots of warm cocktails will be consumed as the NBC cameras will be rolling until the last firework has been lit. Then everyone heads to Main Street to keep the (after)party rolling. You don’t want to miss this.

Back for a second year, the Wasatch Yeti Bash takes place Friday night at the Ogden Amphitheater and Saturday at Wolf Creek Resort.

Friday night features a Winter Sports Expo, yoga, a community fat bike ride, an art stroll and, and an awesome beer garden. I can’t wait to see the Yeti try all of these in one night.

Saturday is the on-mountain celebration at Wolf Creek highlighted by the Sweaty Yeti Fat Bike Race. This race should be an absolute blast.

Sunday has a chance of being a pretty good day on the slopes too. The Wasatch could see a good bit of snow on Saturday before clearing out by Sunday morning. I’m headed to Snowbasin or Powder Mountain to shred some bluebird pow with the Yeti. I’ll see you there!

This past Sunday marked the end of the 2017 Sundance film Festival. And what a ten-day party it was! No, I’m not talking about the films, the celebrity appearances or the swag bags - I’m talking about the powder skiing!

What was forecasted to be a couple weak storms welcoming the first days of Sundance, turned into one of the biggest sleeper storms of the season in the Wasatch. The feet of snow may have had a negative effect on the Sundance opening weekend attendance numbers and local traffic, but I didn’t see too many people complaining about it on the slopes. I heard even less after another, stronger storm moved into Utah a day later. While the wind, snow and power outages made life a little more difficult for Sundancers, the powder skiing was as good as it gets.


For the 16th consecutive year, I failed to make it to see one movie during the festival, but that didn’t stop me from becoming inspired to create my own unofficial Sundance film entries, all filmed entirely during the 2017 Sundance Film Festival… or should I say, Snowdance Film Festival? Check out my three entries and an honorable mention from Powderhound Matt. 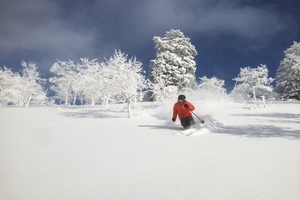