It’s no secret that winter got off to a bit of a slow start here in Utah. While reading stories of record snowfall in Alaska and even some snow in Hawaii, we were patiently waiting for storms to find their way to the Wasatch. A little over a week ago, the forecast looked less than promising and even the most optimistic ski bums were starting to turn into a bunch of Scrooges. Temperatures were cold enough to allow for the snowmakers to do their thing, but mother nature was taking her sweet time delivering the Greatest Snow on Earth.

Well, that all changed this past week. Suddenly, the models began hinting at some potential snow just in time for Christmas.

We were visited by three spirited storms, The Storms of Christmas Past, Present, and Future.

Just in time for the Christmas holiday, Storm #1: the Storm of Christmas Past, rolled into the Wasatch on Wednesday night and followed the recent trend of storms splitting and underperforming the forecast. I was lucky enough to head to Brighton just as what was left of the storm rolled into Utah. We skied powder at night under the lights of Brighton’s night skiing operations.


The next morning I found myself at Alta Ski Area skiing the half-foot of new snow on some of the best coverage available in Utah. With four lifts running, lots of traverses and short bootpacks open to the public, it wasn’t hard to enjoy the fresh snow, occasionally finding spots significantly deeper than the Ski Utah Snow Report totals.


Just as the first storm was making its way out of Utah, a second storm began to appear in the models. While understandably skeptical, a couple of my weather-nerd friends became cautiously optimistic.

What happened next was nothing short of a Christmas Miracle!

Storm #2: The Storm of Christmas Present, arrived the 22nd and 23rd of December, and delivered much needed snow across the state, over-performing the forecast and providing some incredible powder skiing for all.

With Beaver Mountain opening on the 21st, we knew it would be the perfect place to ski 18’ of blower powder and avoid any holiday traffic. We absolutely nailed it! Powderhound Matt, Justin Morgan, and I rolled into Beaver Mountain at 10am on the first Saturday of Christmas break and joined less than 25 cars in the parking lot. We skied untracked powder until our legs couldn't take it anymore. Don't believe me? Take a look below:


This was my first time skiing Beaver and I can't believe it took me this long. The vibe is laid back, a throwback to the family-owned resort era of skiing. Fun terrain, no crowds, incredible food, and, oh yeah, some of the best powder skiing I can remember. While I'm a huge fan of steeps, cliffs, and getting rad, there's something magical about simply skiing untracked powder with your friends. I can't wait to Ski the Beav again very soon.

Storm #3: The Storm of Christmas Future, visited us on Christmas Eve as the Torchlight Parade made it's way down Snowbird. This storm rolled in warmer and put down some base-building snow that gave the resort some much needed coverage and allowed us to start opening more and more terrain. Storm #3 yielded around 9” of snow from the 1” of precipitation. Higher density than our traditional Utah powder, but it was exactly what we needed for our snowpack here in Utah. The surfy pow was a blast to ride and even provided a little extra workout for the legs. More importantly, the slightly denser snow went to work, applying a layer of spackle to the rocks and stumps, while building a base for the next series of storms.

Check out Powderhound Matt’s video from the third Christmas storm at Alta:

The Three Storms of  Christmas Past, Present and Future were exactly what we needed. Our much-maligned snowpack has made a pretty good recovery. Even though we still sit around 55-75% of our usual snowpack, the resorts are making snow, and the skiing is getting better with each day as new terrain opens across the state. Oh, and the apres-skiing has been all-time too! 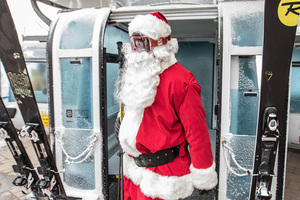 The 7 Habits of Skiers: Sharpen the Skis 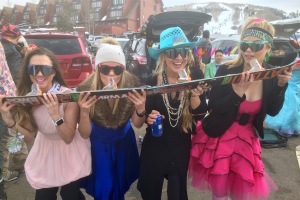 The 7 Habits of Skiers: Synergy, In Defense of the Shotski

3 Great Gifts for Your Parents