From a US Ski Team Press Release

CAVTAT-DUBROVNIK, Croatia (May 22) – Utah's Deer Valley Resort continued its preparations for the 2011 FIS Freestyle Ski World Championships with a presentation of its draft schedule to the International Ski Federation's Freestyle Committee. The meetings were a part of the annual FIS Calendar Conference in Cavtat, near Dubrovnik, Croatia. It will mark the second time that Deer Valley has held the major international event.

A provisional event schedule for the Feb. 2-5, 2011 World Championships was accepted and will now go to the governing FIS Council in June for its final approval.

Since being named as the host by the FIS in 2006, Deer Valley has continued to hold an annual World Cup, including special test events for two of the newer freestyle disciplines of ski cross and halfpipe. A year ago, Deer Valley held a test in ski cross down its Solid Muldoon run. American Casey Puckett (Aspen, CO) finished second. Ski cross will make its Olympic debut in Vancouver next February.

Deer Valley partnered with Park City Mountain Resort to hold a skier halfpipe event last January as a part of its annual World Cup. While not yet an Olympic event, ski halfpipe and ski cross have both been conducted in the FIS World Championships. American Jen Hudak (Park City, UT) took bronze at this year's World Championships in Japan.

"Deer Valley is proud to be the host of the World Championships a second time," said Deer Valley Events Manager Carrie Budding. "We feel very close to the freestyle community through our annual World Cup events and it's an honor to be hosting this event."

While Deer Valley is the host, it is partnering with Park City Mountain Resort for the halfpipe event. Aerials and moguls events will be at Deer Valley on the Olympic courses, along with ski cross on Solid Muldoon. The skier halfpipe event will be at the site of the 2002 Olympic snowboarding superpipe.

"Deer Valley is the premiere stop on the FIS World Cup for freestyle skiing. Combining with Park City Mountain Resort in 2011 only will elevate this status," said Chief of Competition Konrad Rotermund. "Our experienced team of volunteers that have supported so many local events, give us great confidence that we can continue to push to achieve our best."

Deer Valley is also partnering with Park City community, with support from the Park City Chamber/Bureau and the Utah Sports Commission.

"Deer Valley has become a real favorite of athletes and team officials from around the world," said U.S. Ski and Snowboard Association Vice President, Events, Calum Clark. "The Teams had a great Championships in Japan this past season and are now looking forward to returning to Deer Valley in less than two years."

The full event will span from Sunday, Jan. 30 through Sunday, Feb. 6. Competitions are scheduled Wednesday through Saturday, Feb. 2-5 with a mix of daytime and night finals.

Deer Valley will play host to an important Olympic qualifying World Cup this January before the U.S. Ski Team heads to Vancouver for the 2010 Olympic Winter Games.

The Future of the Canyons are in your Hands. 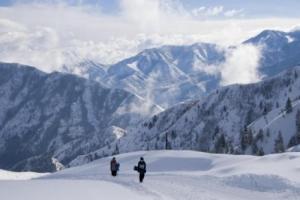 The Easter Bunny is coming, the ski season is going.