A lot of times we take skiing for granted. We may live in Utah, close to a resort, own a quiver of skis, and enjoy a lot of powder days. Some people on the other hand, and I say this carefully, could care less. They look at the mountains and view beauty and grandeur, but when the snow starts falling, confine themselves to the shelter that their homes and work offer.

Spencer King is a good friend of mine, and was raised in the "Lone Star State". After being in Utah for school for a few years now, he decided to take the powder plunge and try skiing with me last Friday.

He was eager, he was anxious, and Brighton was the perfect place to learn to slide the slippery slope. The Explorer lift at Brighton was where I learned to ski many years ago during a youth activity with my church. I remember being cold and wet, wearing my dad's oversized gloves and ski jacket. After making thousands of turns at Brighton over the years, I wanted to share that same joy with Spencer this snowy February day.

This is a post that is a good deal longer then anything I have written here so far. The full article is after the break, and contains a story of a day of skiing. If you take the time to read it, I applaud you, there a lot of words there. Tuesday, I will post part two, which takes me to Park City, and chronicles my Dad, a Principal at Hillcrest High School, conquering the terrain park.

As we drove up to Brighton that morning, I tried to conjure up every skiing lesson that I had learned over the years. Skiers stance, fall line, pizza, snow plow, all of these were drilled into his head. I realized very quickly that the lesson that I should have been teaching was not how to get down the hill, but how to get back up when you fall.

We got in line at Explorer and prepared to board the lift. "Just sit down like you are sitting in a chair," I eagerly cautioned. He did, and we were off. We made it about 25 feet before the lift slowed down, and we were brought to a stop. Apparently someone had a hard time getting on the lift... I praised Spencer for boarding the lift successfully on his first try.

As we ferried up the mountain, Spencer took in the sights, finding a line for his eventual destiny. As we were about to unload, I cautioned that we needed to get off the lift, and then move to the right, to get out of the way of the skiers that were behind us on the lift. I was nervous, and for good reason--steep hill, new skier, and big heavy chairs that like to bonk people on the head when they don't get out of the way fast enough.

And this is where Spencer amazed me.

With the finesse of a drunken figure skater, he cleaned off the lift, rode down the ramp, and turned and came to a graceful stop. I stood back in shock and applauded his efforts. After this stunning act, I knew we would be skiing powder before then end of the day. (There was about ten feet of fresh stuff up there, and I was anxious to get to it. Not really ten feet, but when there is powder, and you are stuck on the bunny hill with a friend, inches = feet.)

We skated around the lift, and prepared for the descent. After the aforementioned lift dismount, I was pretty sure that it would be smooth sailing for the rest of the hill.

That is where I was wrong.

The current ski status quo is that there are a few people who are naturally good, however, the majority of people are not advanced skiers the first time they clip into bindings. This is deftly where Spencer fit in.

To say that Spencer fell a few times would be an understatement--he brings new meaning to the phrase head over heels. At one point I was sure that his leg was twisted in a way that was only possible for cartoon characters. After about a hundred feet of this, and some fine coaching by yours truly, Spencer regained his recently crushed confidence, and we were on our way down the hill. This time without falling.

He made it all the way to the bottom of the hill without incident. We hopped on the lift again, and once again, we lapped the bunny hill, without incident. Spencer was turning, connecting the curves like a honed slalom racer. He was confident, and enjoying the day on the hill.

After spinning a bunch, we decided to ante up, and make the move to Majestic. Now, the Majestic lift offers everything from greens to blacks, and Brighton's world-class terrain park is nestled between everything. As we rode the lift, I scouted the features and prepared my line for the terrain park. My thought was to roll through a few greens, and then have Spencer roll through the park with me. I wanted to give him a taste of what skiing in Utah is all about.

To make an increasingly long story short, the blue that we had to ride to get to the greens proved to be a little bit more then Spencer was ready for. After struggling for a few hundred yards, we reached the combed corduroy cascading down the mountain.

We decided to take a break, and the lodge eagerly invited us in. We feasted on burgers and fries, and regained the calories that we had lost over the day so far.

I had been worried all day that the falls may have taken a toll on my friend, that his confidence would be tried to its breaking point. With a big smile, he assured me that he was having a great time.

It didn't matter that he had fallen several times. It didn't matter that he was a little colder, and that maybe his gloves were a little wetter then when he started the day. Spencer was empowered. Before we arrived that morning, he had never felt the joy of skiing. But by the time we left, he had conquered the mountain. He had elevated his abilities, and left feeling like he could conquer anything. That is what skiing can offer a person. The ability to trounce the obstacles that stand before us. When you leave the mountain, you have elevated yourself above the common man, and have vanquished those personal demons that stand before you. I doubt anyone gets that feeling going to work at the office everyday.

Spencer had a great day. He left anxious to return again. Once he had tasted a fruit that sweet, can you blame him for it? So, maybe you have a friend that has never been, a long-time local who is a little nervous about taking the plunge and starting to ski.

Be warned, they may never be able to their former ski-less life. Their status quo may end up permanently altered.

In part two of this series, I write about my dad, and about conquering Pick and Shovel Park at Park City.

More To Skiing Than Skiing, Right? 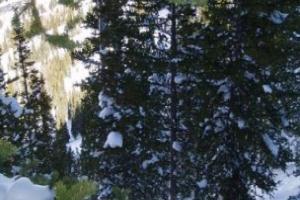 sweet dreams are made of these

Tele Tribe at The Canyons