We're 4 out of 5 weeks into Brennans snowboard lessons at Brighton.  We had Marco the first week filling in for his instructer Molly who he's had the last 3 weeks.  He's gone from the tiny Explorer lift to the Magestic lift which has some great long green runs.  In the process, we've now turned 5!  A big moment for Bren, maybe not so much for me.  My baby is 5 and I'm struggling.  You Moms know what I'm talking about!

I'll share a few pictures of the big day.  We decided to highlight his board obsession with a cute picture of him on his cake a friend of mine made.  His eyes lit up as he saw his cake.  He had a great day, lots of excitement and sugar.  The problem, the next day we had to go boarding.  I decorated his helmet to highlight the day and he had to wear his new snowboard shirt!  He was tired!  Molly did a great job trying to motivate him, but have you ever tried to haul a little fella down the hill bent over?  Not easy.  I guess that is what happens when you have too much fun partying at 5 years old.  I asked Molly what to do in this situation.  She just asked him if he wanted to board or not.  If they aren't feeling it, you can't make them do it.  He decided on his own he wanted to go.  That's the thing with kids...if they are done, your day is done.  As I watch Brennan and his snowboarding, I realize it is hard!  At this age, kids don't have the muscles developed in their ankles like an adult.  I watch him turning and doing his heel and toe stops...I'm proud!

Emily and I skiied and she tried the terrain park.  Again, video tells the story.  She said "I think I'm going to wait until I'm a grown up".  I'm a grown up and I don't want to try.  Kudos to her for trying.

Fast forward one week.  A big dump at Brighton!  25" in 24 hours.  Wasn't sure how the snowboard lesson would go in the deep powder.  Brilliant!

He's getting it.  Molly was thrilled at his effort and check out how he's coming along at a good speed, toe/heel turns...on his own!  Next week...the big race to end the 5 week lessons at Brighton.

And guess what?  Emily got her own equipment!  Ski' N See has some awesome end of season deals going on right now!  She got skis and boots.  Poles are coming.  She said "my feet are so warm and cozy and I think my skis help me turn really well".  While Bren was crusing down the hills on his board, Emily and I were trying the powder shots...OK, we were crashing.  Video....  I know, but guess what, she got up and giggled!!  Tough girl!  See, these lessons have paid off!

Enjoy the videos this week! 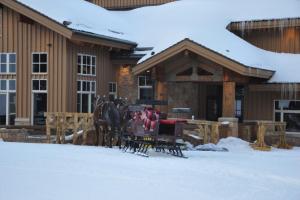