The excitement is at a fever pitch as the first BIG storm of the season hits Utah. It moved in Friday on cue with a lot of snow allowing many of the Utah resorts to open up with amazing conditions for the first weekend of skiing. I have to admit, I didn't make it.  Yes, it was me, not my kids.  Emily and Brennan were fired up, but decided to give it a week and instead they played in the yard-poor kids.

With all that said, the question remains: Does Utah really have the "Greatest Snow on Earth"?

Jim Steenburgh is a Meteorologist and has written a great book on this subject.  He has done a lot of research on Utah's snow, and it comes down to snow density and how storms roll in and out of Utah. here is a link to his article. For a really good "classic" storm, you want the snow to come in a little wet and heavier ahead of a cold front. The latest storm in Utah did just that.  On Friday, temperatures were very warm and the density of the snow was quite high.  Snow density or water content is key. The higher the number, such as 15% snow density, the wetter or heavier the snow. Especially in early season storms, you want that. That heavy snow lays down hard to cover the rocks, trees and other obstacles on the ground.  The resorts can groom that down into a hard pack for a solid base. As the cold front passes, colder air moves in and the density gets lighter.  Maybe more like 11% snow density. This puts in a lighter layer on top of that heavy snow.  This occured on Saturday afternoon. Also with a cold front, there is heavy bursts of snow. During that time, you may get white out conditions and very heavy, blowing snow.  The cold air is moving in under the warm air and displacing that warm air.  These snow bursts can last from 30 minutes to a couple of hours.  Sometimes thunder snow can develop with the passage of the cold front.  It is not common, but can occur.  If it does, it can snow 2"-3" an hour.  Once the front goes through, the snow becomes more showery. It is during this time, the temperatures drop and you can see the snow getting a lot lighter-more fluffy or powdery.  The final push of a "classic" storm is when the upper low pushes across. This low lags behind the cold front and contains the coldest air.  It will bring a final push of snow and this snow is the powdery low density snow. This is the snow that we all love to ski in because it is like floating on air.  The density is very low, around 8% here in Utah. That occured late Sunday.

Totals from the big storm:

I'm not saying other places have "less great" snow, but the density of around 7% at the end of a storm in Utah seems to be the right combo of powder. When storms come off the Pacific and hit the Sierra or Cascades, the density is in the teens. With such a maritime climate and temps staying near freezing, the lower density doesn't get a chance to develop. In Colorado and Wyoming, the snow is drier, more like 7%. Keep in mind, each time a storm crosses a mountain range, the moisture "wrings out" of the storm.  When air rises-or is forced up over the mountains-it squeezes more moisture out of the airmass. This means there is lower water content in the air. A storm coming in from the Pacific has to hit the Cascades/Sierra, head to the Wasatch of Utah and then over to the Rockies of Colorado and Wyoming.  That Pacific airmass has a lot of miles on it before it gets to the Plains.  Once it gets there, it taps the Gulf of Mexico moisture and then they deal with their own set of storms in the Eastern US. A perfect example of "tapping" moisture is the record setting event this past week in Buffalo, New York. The very cold air mass passed over the warm waters of the Great Lakes and grabbed all that moisture and dumped it on the end. This is Lake Effect Snow.

With all that said, here is a list of weather terms you often hear and links for a little more research:

1. Lake Effect Snow: Utah gets the help of the Great Salt Lake in the early winter to help enhance the snow, oftentimes in the Cottonwood Canyon resorts.  It depends on the air temperature, the lake temperature and the direction of the wind.

2. Trough:When a trough approaches Utah, it normally carries with it a storm. The storm can be big or small, but in the winter, even a small trough will carry with it a weak cold front and snow. Remember, it doesn't take much lift in the atmosphere to create snow. All it takes is a trigger to lift that air up and over the mountains.

3. Low Pressure: Around a low pressure, air is rising. Rising air cools, holds less moisture than warm air and precip occurs. When you see a low on a map, it is referred to as the storm. Air likes to settle in a low pressure-it rushes to that area. Like in a bike tire, the air is very high inside the tire.  When you release the air, it rushes out or makes a hissing noise-it is moving quickly to the lower pressure outside the tire.

4. Jet Stream: This is really the steering wheel of storms. When the jet stream has moved south of Utah, it is steering the storms over Utah. As in the case of the big NY storm, the jet stream had dipped way south to allow all that cold air in over the area.

5. Winter weather warnings/advisories: Each area of the country has their own definitions and criteria to meet when watches and warnings are listed. I have linked you to Utah's criteria.

Other great links to definitions and explanations:

If you are a Mountain Mama and interested in getting some Mama's together for skiing at various resorts through this winter, please email me.  Would be fun to set up an every other week gathering at a different resort through the winter for a little Mama time! 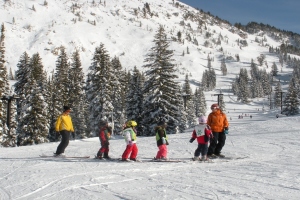 Ski/Snowboard Lessons and Programs in Utah

From the mouth of babes..."Come on out to Utah!"

First Turns of the Year! (Video)