The North Face Masters started five years ago to allow the sport of big mountain riding a wider audience with a spectator friendly vibe, while also allowing riders the ability to free ride the mountain as snowboarders always have. Pushing personal limits is what the tour has set out to accomplish in those years and I believe the sport is better because of the spirit it has brought to the arena of snowboarding. After my friend, Brock Butterfield finished 17th overall on the tour last year, I wanted to see what an over-the-hill snowboarder at 33 years old could accomplish having never competed in a big mountain event.

The first tour stop for the Masters was at Crystal Mountain in February was a humbling one. After pre-registration, I was in for Crystal and Kirkwood, but on the waiting list for Snowbird, which was postponed until April due to conditions. So I packed up and traveled northwest after months of anxiety wondering what it was going to be like to compete on steep mountains, trying to impress snowboard legends with just a few turns. It was a lot more stress than I realized and I disqualified myself by falling on a run I usually roll through at Brighton every day in the side country. I had a great experience with my friends while I was riding and wanted to keep that positive experience with me after returning and gearing up for the final stop at Snowbird.

I took the final qualifiers more serious, planning out my qualifying run for two days, taking photos and talking with friends about lines they were looking at and deciding what would be within my ability and still be solid enough to move on to the final round. After all my years taking laps at Snowbird, I had never attempted North Chute and when it was closed to the public before 24” of new snow filled it in, I was cautious to make it my qualifying run. However, with the new snow, I gained enough courage to commit to the line I had laid awake thinking about and repeated my mantra, “stomp it.” With heart pounding I attempted to do just that, while keeping the momentum going and remembering that although it was just another run, the next two minutes had to count for all the experience I had added up over the years.

I stayed true to my line and then applauded and high-fived the rest of the crew of friends that were making their way through the same stress that I had just felt.

There was plenty of solid riding going down and huge airs being launched, but having learned that staying on your feet keeps you in the race. At the end of the day the women’s field of 20 was cut to 8 and the men’s 60 were reduced to 27. The ax fell at 4:30 pm and I happened to be above the cut off at 24.

Making the finals never seemed like an attainable goal, until it really happened. I realized I would be competing with some of the world’s best riders. After signing up in December to compete, I could actually hang my hat on an accomplishment in snowboarding that I could call my own and it felt good! 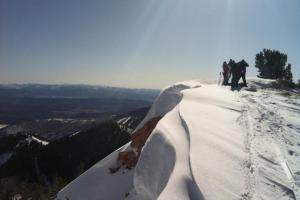 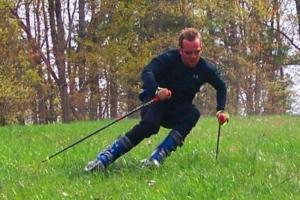