I Skied the Beav

located just east of Northern Utah's Cache Valley, is one of those resorts that you grow up skiing at and when you return years later you're stoked as ever to spin the same rustic lifts and see the same friendly faces.

Touted at "Utah's Best Kept Skiing Secret" it's I had never before made the trip up north so this past Saturday I hopped in my Subaru and headed out.

Living near Park City I opted for the quieter drive out I-84 to Evanston and then north to Bear Lake. The option if you're living or staying in Salt Lake or Ogden is to drive north on I-15, exit at Brigham City and drive north to Logan after which you head east into Logan Canyon for about 25 miles.

From Kamas it was about 2 hours and 15 minutes to the resort with mostly clear roads. From Salt Lake the drive time is similar.

When pulling into Beaver Mountain's parking lot (aside from Marge's Triple which was installed in 2002) what you see is what you get....mostly. If you're like me and you came from the Bear Lake direction the eye candy that is Beaver Mountain's backside was not visible approaching the resort. Most of the locals and former locals I spoke with couldn't go one or two sentences about Beaver without mentioning the backside. So that's where I headed first.

While the locals I spoke with on Saturday said that it was "crowded" the untracked lines all the way up until 4pm on the backside didn't lend any credibility to their statement. I think they were trying to steer me away.

From the top of Harry's Dream or The Face lifts you can access the backside which is littered with pillow drops, cliffs, open glades and fun ridges that lead to a traverse that if crossed will mean you're thumbing your way back to the resort. I'd suggest avalanche gear and knowledge if you're looking to head down to the road.

After a couple of laps on the backside I hit a few runs off the Face lift and Harry's Dream. I didn't have to look far for more untracked powder. The sides of the runs and the trees must be off limits to the predominantly family heavy ski population at Beaver because I pillaged the plundered with ease. The same thing happened on Marge's Triple, more powder just a stones throw from the many tracks that were the established runs.

I'll definitely head back to Beaver Mountain, particularly if it's a mid-week powder day where I'm sure "crowded" means more than a couple dozen cars in the parking lot. Don't expect any valet or ski check at Beaver - its pure powder and "REAL" skiing the way it used to be and in some ways always should. 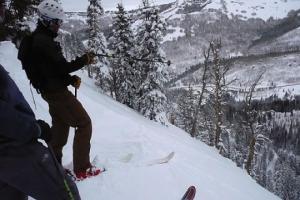 A Strange Day on the Wasatch Front

Anticipating a Month In Utah