I remember one powder day at The Canyons where I kept lapping 9990 over and over due to the refills from a raging storm. As typical to the 9990 lift there wasn't a lift line. Near the end of the day after a few Peak 5 runs and some Tombstone and Saddleback laps I realized that I had skied over 42,000 vertical feet in one day. Up until today I thought 42K in one day was pretty cool.

Enter JF Lanvers from the Go 11 Blog. For his 60th birthday JF set out to exceed 60,000 vertical feet in one day. From his blog:

For my 60th birthday, I had promised myself a very special present, one that was both simple and affordable; ski 60,000 vertical feet in the course of one day. In the past, I’ve tried hard to outdo myself in that department; five years ago, I piled up 46,787 feet near Banff and two years later, I logged 50,625 at Park City Mountain Resort....

He choose Deer Valley as the location to get his goal done, specifically the run "Perseverance”, which aside from being appropriately named for the occasion it's a nice 1800' run off of the Sultan Express Lift.

I stayed on “Perseverance” the one run that is the closest to the lift line and also happens to be the least crowded because it’s the steepest; the first third of that run consisted of bumpy crud while its remaining and largest section was perfectly groomed and allowed for maximum speed. Just before 2 pm, I had passed my 60,000 goal and decided to push on.

Kudos JF for pushing on to just over 84,000 vertical feet! 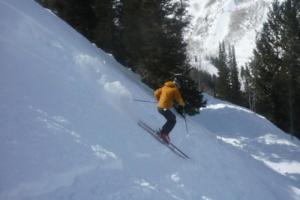 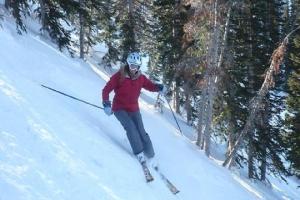