This past month during the Outdoor Retailer Show a couple of PR peeps that work for Base Camp Communications in Jackson, Wyoming came to town for the typical show but what they experienced at Snowbird for the two days following OR and before heading off to Vegas for SIA was anything but typical.  Here is the experience as told by Dave Simpson of Base Camp.

January is trade show month in the outdoor business. Outdoor Retailer in Salt Lake is followed by the SIA ski show in Las Vegas. No better time to carve out a day between shows for a little skiing in the Wasatch.

In pursuit of between-show recovery, our Jackson, Wyoming-based crew planned an afternoon of skiing at Snowbird, a night at the Cliff Lodge (none of us had stayed there before), and most of the next day of skiing before an evening flight down to Las Vegas. Our timing turned out to be impeccable.

When we arrived in Salt Lake, it had been high and dry for weeks, but a couple days before we headed to Snowbird, it began snowing. The resort got 40-some inches in two or three days. When we got there, the snow conditions were amazing. We had a number of friends who were also skiing Snowbird, but it was hard to connect because, well, it was a free-for-all. Better yet, another foot of snow was in the forecast that night, and they planned to close the canyon road that night to shoot for avalanches, so we were being ‘interlodged,’ as they call it. No one could leave the building until avalanche hazard was addressed.

There’s nothing like being told you can’t leave the building to make you feel like you’re in real mountain country. Fortunately, the outdoor hot tubs at the Cliff Lodge were still accessible. And they definitely earn their title, bestowed by Skiing Magazine’s editors, who happened to be on the scene, of ‘best hot tubs at a ski area.’ Or something like that. The exact title is a little fuzzy.

Next morning was not a morning to have a leisurely breakfast. I asked a locally based friend what time we should be in line to catch first tram, and he told me 8:15 to 8:30. I was stunned. In Jackson, there’d be a bunch of hardcores standing in line since 6 in the morning on a day like this. I’ve even heard first-person accounts of spending the night on the tram dock in Jackson. Of course, it didn’t hurt that the road from the valley wasn’t supposed to open until 9. We showed up at 8:15 and there were exactly two people in line.

Re-shocked, we tossed our skis aside and went to find a breakfast burrito, then to another place for a coffee, and finally to the ticket window to get our passes. Back in the tram line at about 8:35 there were now, uh, four people stacked up. At about 8:40, the people started flowing in and a real line formed. Still, you could have walked up at 9 and caught second tram. Impressively, given the avalanche control work that had to happen that morning, the first tram went out pretty much on the dot.

Two trams and two Peruvians later, they opened Mineral Basin to a stampede through the new tunnel at the top of the Peruvian Lift. First tracks. Again. It had been a number of years since I’d skied Snowbird, and the addition of Mineral Basin’s terrain since the last time I was there really spread skiers out impressively over the terrain. We’re no strangers to world-class terrain and excellent snow in Jackson, but Snowbird can’t help but impress.

All in all, a very fine 27.5 hours. Definitely would have to say that staying at the base of Snowbird is an amazing experience if you’re a skier, particularly if you happen to get interlodged. I’ve skied the bird before, but staying at the base is most certainly a couple notches up. The Cliff Lodge is a great place to stay (some think it a little industrial, but we thought the bombproof concrete construction fit right in with the its craggy surroundings), it’s steps from the skiing, and Snowbird has the terrain to let skiers really spread out. All you need is right there. Even on a huge powder day, once they got the road open, we had little trouble with lines. The tram backed up occasionally, but you could virtually walk on to the adjacent Peruvian lift when it did. We came back in an hour, and the line was back down to catching second box.

At 2:30 we reluctantly (OK, maybe not our quads) pulled the plug and headed to the airport. Heading to a ski show, we liked to think it helped us talk the talk.

Respect at The Canyons 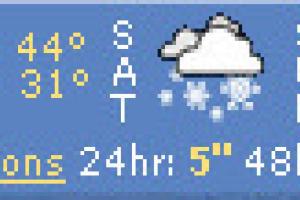 Respect at The Canyons

2 days in a row- it's getting deep out there.