And the Winners are...

Well that’s actually a trick question. Considering we all get to ski and ride The Greatest Snow on Earth, I can assure you we’ve all won.  That being said, it just so happens that the first two resorts to open this season also just so happened to receive the most snow. Is it a coincidence that the snow Gods rewarded them with more snow than any other resort in the State this past weekend?  I don’t know, you tell me.  Brighton and Solitude each received 24” of the cold smoke we’ve all come to know and love.  I think I’m just going to chalk it up to good karma.

Reports from the soon to be opened resorts in the Wasatch were also rather impressive.  Our good buddies at Wasatch Snowforecast not only did an incredible job of forecasting this storm system but did an outstanding job of summarizing the snow totals as well.  The Utah Avalanche Forecast Center had this to say about the storm.

A powerful Pacific storm shook the Wasatch yesterday, with most areas picking up significant snowfall.  A look at the numbers -

I know what your thinking, enough already! Just show us a video.  Well to be honest I flailed this weekend. Saturday I forgot my camera and Sunday I partied a little too hard celebrating all the new snow at the NoName Saloon on Main Street in Park City. Sunday morning I made it out to the mountain by the crack of noon. Needless to say all those other Powderhounds out there beat me to it. Have no fear though I wont leave you empty handed. Powder Posse member Andrew Muse who is actually a ripping snowboarder threw on a pair of skis and went for a ride with his pup up at Deer Valley.  Check out all the fun these two had... 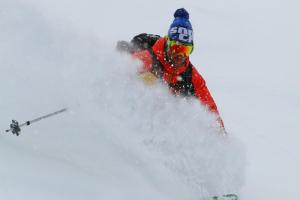