I’ve seen it snow hard, really hard, but I don’t think I’ve ever seen it, dump, pound, nuke, hammer or whatever you want to call it quite like it did last Tuesday.  From north to south the mountains of Utah got hammered! Most resorts reported right around 2 feet of snow. I just happened to be at Alta on Tuesday during the brunt of the storm.  At one point early Tuesday morning it was snowing at a clip of Four Inches Per Hour!!!! That’s nuts! Don’t believe me, well I’ve got proof! Check out the video footage around the 13 second mark and see for yourself.

This latest storm has set us up perfectly to rock and roll through the month of March. See you on the slopes.

Here is my Pal Justin's take on the same couple of days. 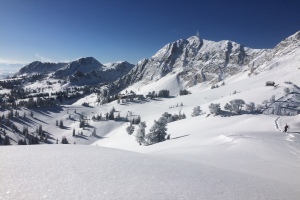