Say hello to the Ski-Lebrity!

My ski pal of four years has moved on to California.  Life threw him a curve ball and instead of skiing the Greatest Snow on Earth® this winter, he will be in classroom...  His departure left a gaping hole in my master plan.  Jason and I have always skied together. Both super passionate about the sport, had the same work schedules and skiing powder was always our number one priority, so in effect we never ever missed an opportunity to make pow turns. He knew the program well and was willing to wait in order to get the perfect shot.  Never complained about blowing off this blog so we could just ski. He was cool with the set up, shoot video and photos program, all while there were hoards of Powderhounds chomping at the bit right behind us.  While capturing untracked pow doesn't sound like a hardship, it is hard to find buddies who are willing to slow down for a second to document the surfing of the untracked goods.  I can't tell you how many guys I've brought to the resort and instructed them, "hey we have to get some untracked powder shots and video first then we can free ski all day."  In theory this works for everyone but when push comes to shove and there is two feet of the Greatest Snow on Earth® just sitting right there in front of you, the stop, wait, setup shoot ski program often would go completely by the wayside. My ski model for the day was off skiing powder just not in front of the camera lens.  So thanks Jason for dealing with the stop and go, you were a great ski partner but let's be honest, you loved seeing your face plastered all over Ski Utah videos, webpages and facebook links.  You know you thought you were kind of a celebrity.

>Well that brings us to your replacement, the Bagel Boy! As the winner of the Ski Utah Trip to Chili, Adam knows now it's his time to shine.  It's time for Adam to become the next Ski-Lebrity  and he is pretty crafty when it comes to making his own video edits. Adam was probably the first guy in North America this season to receive full on faceshots.  You know how I know?  I was there to document it at Powder Mountain.   The amount of people that viewed the photo was off the charts, something like 290,000 and my Powder Mountain ski movie edit was equally well received.  So in honor of his climb to fame I give you Bagel Boy's first edit of the season, "Ski Lebrity".  It's a story of a young man's struggle to make to make it big in the ski world.  O.K. obviously, I'm just kidding, but enjoy the edit. It's quality work.

Oh and as I'm writing this it's absolutely dumping in Utah! From the valley floor to the mountain tops it's puking in Utah.  I think my facebook post from last night sums it up best. "You know what I love about living in the Utah Mountains? When a snow storm is on the way they say, "1-3 in the mountains" the weatherman isn't talking about inches. Our snow totals come in FEET!"

Be sure to check back on Monday or Tuesday because I'm quite certain we'll be out slaying pow this weekend! 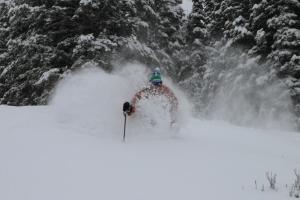 First Powder Turns of the Season!

Winter's knocking on the Door!

First Powder Turns of the Season!