Bone Marrow and crispy bread at The Copper Onion

House-made pickled everything was big at resturants last year.

The author on a spring ski day at Alta, just before skiing High Rustler for the first time.

Mixologist or Bartender? You may have to sample some cocktail this year to decide.

Bone Marrow and crispy bread at The Copper Onion

House-made pickled everything was big at resturants last year.

The author on a spring ski day at Alta, just before skiing High Rustler for the first time.

Mixologist or Bartender? You may have to sample some cocktail this year to decide.

Remember the first time you tried foie gras? How about coq au vin or vindaloo? Recall, as you took your first bite of a lobster roll or a muffaletta—items foreign to you until then—the sensation as the new flavors and textures registered on your palate and shot a telegram straight to your brain that contained only one word: Good. Oh yea, baby, THAT IS GOOD.

Last year, as Ski Utah’s first food blogger, I had a lot of these moments. I tried my first scoops of bone marrow, lathered on crispy bread at the illustrious Copper Onion in Salt Lake City. I tried ash—not by burning my hot pad on the barbecue—but intentionally, materialized into something amazing by the chefs at Forage.

The 2012-13 season was a great one for eating because of cool happenings across the state. Artisan foods really took hold, showing up in everything from confit to coffee. Regionally made offerings grew as cheese makers, farmers, meat producers and small batch operators were cranking out everything from honey to hummus.

Next, the processes chefs used were interesting. Nothing was safe from the smoker, from salt to fish and fruit to butter. Pickled foods, a farm-chic process—have shown up in the most urban restaurants, enough to be parodied on HBO’s "Portlandia," and evidence of the stronghold of the “back to the roots” movement, part of a broader Southern food crush that includes delights like chicken and waffles. Check out the hilarious skit from "Portlandia."

Choices in gluten free dining are ever-expanding, happy news for those on the hunt. Beyond breads and crackers, we’re seeing pizzas and pastas made of everything from quinoa to rice to artichoke leaves.

Also on the rise last year was the term “mixologist.” A few years ago we only had bartenders and as capable as they may have been, they weren’t mixologists. Or were they? Read here for a great debate.

So what will this season bring? What will be your “first bite,” your inaugural leap into new flavor territory? Stayed tuned to this blog each week to inspire your eating adventures. Today, click here to get your hands on the new issue of Ski Utah magazine where you’ll find handy dining guides.

Five years ago, I was a new skier. Even though I was born in Utah, I wasn’t raised in a skiing family. I had the opportunity to ski a few times in high school and took up Nordic in college but I didn’t dive into downhill until I met my husband-to-be who basically said, “I ski every weekend all winter, so if you want to do that, that would be cool.” He was cute, so I stuffed myself into boots and stepped into skis and haven’t stepped out since.

Last season was the first time I conquered (yes, I feel like it’s a mountain vs. me thing) Alta’s High Rustler, a run that scared me even to gaze upon it. What will be my challenge this year? In a state with 14 resorts and endless acreage, there’s a lifetime of “firsts” to be had. What will be yours this season? 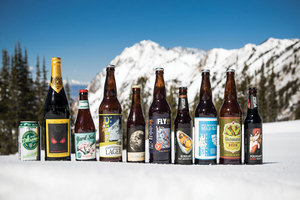