Last week I visited Food Truck Thursdays at The Gallivan Center in Downtown Salt Lake City. Whoever thought of this genius idea deserves a ticker tape parade. At least a half dozen trucks were there offering a wide variety of tantalizing dishes, from rattlesnake sausage to pork n’ waffles to Korean noodles. Lines formed, inhabited by office building dwellers who descend every Thursday like clockwork; friends who make it a ritual; out-of-towners who had heard the buzz; and food truck fans, followers of a particular truck or chef.

I started my tasting circuit at the Chow truck. SuAn Chow is a veteran and always delights with dishes that highlight a California-Chinese fusion cuisine with a dose of local ingredients. The Utah Elk Slider with smoked gouda, chipotle aioli, chimichurri and Peruvian sweet peppers was juicy, layered with intense flavors and topped with a nice crunch.

Next I hit the new kid on the block, Georgia Boy. I was drawn to the rustic old-shed, farm-stand look to the truck but the menu made me drool. Pork Belly Corn Dog with sweet tea grain mustard? Hell, yes. The presentation of the battered “dogs” with house-pickled crudité was fun and delivered with a Southern smile.

The longest line was for Cupbop, Korean BBQ in a Cup, and the fans would not be denied. One woman hits Cupbop every Thursday to get her fix. I was stuffed already, so I had to take her word (and that of dozens of others) that the B-Bop (bbq beef) and the KKO KKO Bop (bbq chicken) are the B-Bomb.

Many of these food trucks roam from downtown to resort towns, stationed near canyon parking lots and various other handy locales. Most cater. Check their schedules on websites, Facebook or follow them on Twitter to find out where they’ll be. The Food Truck Thursday Facebook page will tell you who is coming each week. Last resort (or the first!) we’ll see you on Thursday! 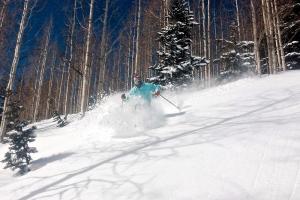