Take a Culinary Trip to Snowbasin

Asian duck confit. You had me at confit.

Seared scallops and corn puree, just a sample of a Dining Discovery offering.

Duck pierogis, part of a special tasting menu at Snowbasin

A beautiful meal at Needles Lodge

Asian duck confit. You had me at confit.

Seared scallops and corn puree, just a sample of a Dining Discovery offering.

Duck pierogis, part of a special tasting menu at Snowbasin

A beautiful meal at Needles Lodge

Snowbasin is a lot of things. It’s a hangout for loyal locals, Ogden folks who’ve been enjoying the big runs long before there was a plush Earl’s Lodge touting Carrera marble in the bathrooms, hoards who ski all day and après until they shut the lights off. It’s a destination, a bucket list item for those who want to follow in the tracks of Olympians down the Grizzly Downhill. Now it’s firmly in the annals as a destination for culinary adventures.

It’s not just that all of the restaurants on mountain do a fantastic job; each lodge menu refocused this year and the breakfast, lunch and après-ski offerings are more varied and delicious than ever. It’s what happens when the lifts stop turning that some magic happens.

Snowbasin isn’t a 24-hour resort, i.e. there’s no lodging at the base and therefore, no dining options with menus and sit-down dinner service. However—another thing locals know—there’s always something in the works for good eating, so get out your calendar and plan to block out some nights and weekends for a trip up the mountain.

Already this year, the culinary team has presented some amazing dinners as part of the “Dining Discovery” and “Culinary Expeditions” programs including grand evenings of food and wine pairings focused on cuisines of India, the Caribbean, or with a focus on Farm-to Table. Don’t miss the annual beer pairing dinners featuring offerings from a local brewery. They do an amazing job. Special dinners happen all year long—follow the Snowbasin blog or check the web site to see what’s on the dining docket.

Tomorrow, March 21, it’s the Tap Takeover Local Beer Fest. At 3:30 pm, Squatters, Moab and Uinta breweries will converge on the patio of Earl’s Lodge for free live music until 5:30pm as well as a BBQ with brats, burgers, and all the famous BBQ.

On March 26th ski and stay for the Après Ski Culinary Expedition: Vodka and Whiskey. Held in the Cinnabar, one of the loveliest bars on any mountain, anywhere, enjoy a pork tenderloin paired with a Bulleit Manhattan or Asian duck enchiladas with a Ciroc mojito—just a couple of the bevvies and bites.

The next Dining Discovery dinner isn’t yet posted but stay tuned!

“High Altitude Grub with a Side of History” 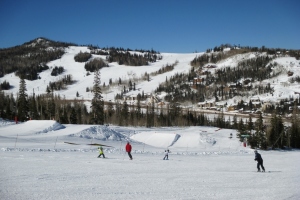 “High Altitude Grub with a Side of History”

A Look Inside the Alta Lodge at Alta Ski Area