Okay, you watched the Games from the sidelines. Now be an Olympian. Or, at least, try your hand at an Olympic sport.

Consider this: Get in a few days of skiing and when looking for something to do take a run down a bobsled track, a turn or two on the speed-skating oval, test a downhill course, surf a super halfpipe or ski and shoot on a biathlon course.

That’s the legacy left from the 2002 Olympics that Utah now offers.

I’ve sampled many and, believe me, I hold a lot more admiration for Olympians.

Ski the slalom and freestyle mogul courses at Deer Valley. Over the years a lot of people have come, asked about and headed in those directions.

Or, visit Snowbasin and take a breathtaking run on the men’s and women’s downhill and super-G courses. Believe me, it takes a lot of nerve not to check speed, even for the very best skiers, on those courses.

Slide into the Super Halfpipe at Park City Mountain Resort where the U.S. won all three snowboard medals in the men’s competition. Oh, and don’t expect big air and 180-degree spins on first or even 20th try.

Jump into a four-man bobsled, with professional driver, and enjoy the fast-track -- 80-plus miles per hour and 5-Gs in the turns -- on the sliding course at the Utah Olympic Park. Skeleton runs are available, but prior planning is necessary.

Take a spin on the short-track speed skating oval where Apolo Ohno trains on the ice at the Utah Olympic Oval.

Ski the northern resorts -- Snowbasin, Wolf Creek or Powder Mountain -- and then stop by the Ogden Ice Sheet and slide a stone on the Olympic curling ice. There are also other locations offering curling lanes in Utah.

There are three options for the biathlon at Soldier Hollow -- the introductory program with air rifle, the longer session, again with air rifle, or the full Olympic experience with a longer cross country test and shooting on the Olympic range with .22-caliber rifle.

Of course, the Olympic nordic tracks at Soldier Hollow, which drew positive mention from athletes in Vancouver, are open and a real eye opener.

So, of the 15 Winter Olympic categories held in Vancouver in February, it is possible to sample 11 of them between now and then in Utah.

Two of my most memorable experiences came on the downhill run at Snowbasin and the bobsled track at the Olympic Park.

The start house at Snowbasin sits on a cliff. There is no gradual acceleration. It’s zero to 80 in three seconds . . . if you didn’t check the speed, which I did.

As downhill courses go, this one is two miles long. The winning time was slightly more than a minute and a half, which meant Olympic speeds averaged more than 60 miles a hour — top to bottom, over jumps and through gullies and in turns that compressed skiers to half his standing height, all on snow as hard as a rock.

Come anywhere close to that time and you’ve got Olympic potential.

The bobsled run takes less than a minute, but you can feel every turn, every chatter in the ice and every bump on the sled. All passengers have to do is lean and try to catch their breath.

I recommend any of the Olympic opportunities, especially for those who lived the Olympics in Vancouver as I did. 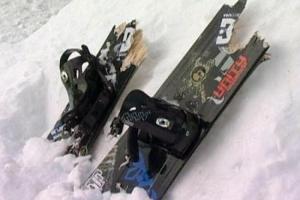